Sign up to myFT Daily Digest to be the first to know about Management news.

Early in the pandemic, before Europe and North America had been hit by coronavirus, colleagues and friends would ask me what to expect.

I’m based in Hong Kong, which was hit earlier, and people were already wearing masks and avoiding crowded spaces after reports of a mystery illness in Wuhan. Companies anticipated disruption and locals prepared for the worst.

This month, the city gave an indication of what to expect in the next phase of the pandemic, when authorities banned all flights from the UK. This came not long after quarantine requirements for arrivals had been eased. Many Hong Kong residents had already travelled to Britain and were stranded.

Such a scenario before the pandemic would have been a management nightmare and may have led to repercussions for staff. Now, accustomed to uncertainty, many employers are sympathetic and helped employees to get home via Spain or Thailand.

Hong Kong’s policy reversal on UK flights was a reminder that the pandemic is not close to over — even as the UK and others lift restrictions. It also shows how the relationship between employee and employer has changed fundamentally. The line between personal and professional lives has blurred, staff feel empowered to make demands of managers and leaders have to try to balance empathy with maintaining performance.

The obvious lasting shift will be to more flexible work arrangements. In a working paper for the US National Bureau of Economic Research, Jose Maria Barrero, Nicholas Bloom and Steven J Davis describe the pandemic as “a mass social experiment in working from home”. They find the practice increased from 5 to 50 per cent in the US and expect it will settle at about 20 per cent after the crisis.

Bloom explains that almost no employer “wanted this to happen” but efficiency exceeded expectations and most employees want to maintain a hybrid work model.

Human resources executives say flexible working is no longer just a perk. “The old model is shot,” says a talent acquisition executive at a data company, adding that all potential hires now ask about flexibility. “The more hard a line you take, the less competitive you become,” he says and suggests that the back-to-the-office mandates of Wall Street banks may make European rivals more attractive.

Naomi Shragai, an executive coach and psychotherapist, says managers too often swing between extremes of being too controlling and completely hands off. Instead, they need to allow autonomy within a set of performance parameters. “People still like to work with boundaries, to know what’s expected of them,” Shragai says.

Anne Helen Petersen, co-author of Out of Office, a book on flexible work, says that smart organisations are trying to understand how to manage without direct sight lines.

“After they figure out the hours, and the days, and the location, what happens to hierarchies, to pay, to communication strategies, to barriers instead of boundaries, to hiring and promotion and retention stats?” she writes in a blog post.

These shifts bring their own challenges for staff as well as managers. Understanding corporate culture, for example, is much harder, especially for new hires. A senior executive who has switched employer twice during the pandemic says this has been very hard to do online. “The trouble is that in organisations with a deeply entrenched culture, you’re at risk of being less successful because you won’t see the triggers,” she says.

Employees will also have to do a better job of balancing their needs with those of the wider organisation. One HR executive warns against an emerging “entitlement culture”, whereby staff exploit generosity. For example, much focus during the pandemic has been on the challenges faced by workers with children, but the executive says that will need to evolve to give weight to other needs: “Choosing to work from home so that you can go to a martial arts class should be as acceptable as doing so to pick up your kids.”

The realisation that jobs can be done from anywhere has also altered HR strategy in ways that employees may not yet recognise. The talent acquisition executive says that his company is shifting white-collar roles from North America and Europe to lower-cost markets in Asia, without worrying about a drop in productivity.

“In business, people like to see simple solutions to complex problems,” says Shragai. “One thing about the pandemic that has struck everyone is the sense that we’re dealing with a lot of uncertainty. People always have but felt they could control events. The pandemic has shown to everybody that you can’t.”

Andrew Hill is away

Explore the series
READ MORE
Mark Gifford: ‘I knew it was never going to be an easy situation’ 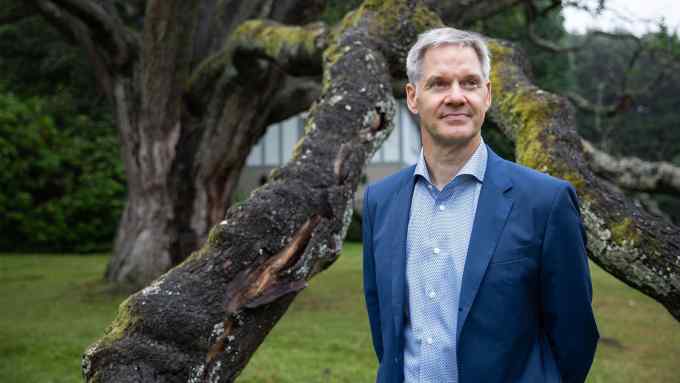