Experience dementia for a day

I am standing on top of a tall building and a kind-faced lady is urging me to step forward and plunge into the traffic below. “Just one step,” she says. For a second, I lean out and feel a rush of vertigo as a juggernaut roars past below.

It is scary and disorienting. “What are you doing to me?” I say.

The scene dissolves and next I am sitting in the back seat of a stationary car looking out of its open door at the same woman. Again, she urges me to step forward, and I do. The car was taking me home.

I have just taken part in a virtual reality simulation of what it is like to have dementia, created by a Japanese company called Silver Wood. This particular experience simulates a condition called visuospatial dysgnosia, which involves a loss of spatial awareness so the small step down from a car felt like the height of a building.

“Dementia doesn’t just equal a loss of memory, there are all sorts of varieties,” says Tadamichi Shimogawara, the founder and chief executive of Silver Wood. “So far we’ve made 12 virtual reality episodes and they’re all based on interviews with dementia patients. We’ve tried to reflect the world they see and experience as faithfully as possible.”

As the world’s fastest ageing society, Japan confronts what Masaki Muto of the International University of Health calls a “pandemic of dementia”. Based on trends in demographics and lifestyle, the government expects one in 20 Japanese will have dementia by 2025, amounting to 7.3m people. By 2050 the figure will be one in 10.

According to a study by Keio University, the economic cost of looking after people with Alzheimer’s disease and other types of dementia in Japan amounts to ¥14.5tn ($128bn) a year, and will be a greater strain on the public finances in future.

A third simulation is like a horror film. I see people who are not there. The wire of a phone turns into a snake and writhes . . .

But even more than a crisis of numbers, Japan is facing a crisis of empathy. In an atomised society, where the young have struggled with economic insecurity for the past two decades, there is a tendency to write off and ignore people with dementia.

That tendency is what Mr Shimogawara wants to combat with his simulations, which use standard consumer virtual reality headsets. “We want to get rid of prejudices about dementia,” he says. “Rather than a dementia sufferer we want people to be seen as individuals.”

His simulations vividly show the diversity of dementia. A second episode is based on Alzheimer’s disease. I am sitting on a train, hearing an internal monologue agonising about where I am and whether to get off. I cannot see the station signs. None of the passengers will meet my eye. The train stops and all the other passengers get out. I follow them and stand lost on the platform. “Where am I?” I say. “Eh?” says the station attendant. “The exit is over there.” Eventually, another passenger comes along and reads the pass around my neck, which says I have early-onset Alzheimer’s. The simulation conveys the anxiety of feeling lost where nobody understands you, like being in a foreign country. “What we wanted to show here is that while it’s possible to think of Alzheimer’s as being a kind of disability, we’ve actually all been in that position,” says Mr Shimogawara. “The way to help someone is just the same.”

A third simulation, based on Lewy bodies dementia (where protein develops inside nerve cells), is like a horror film. I see people who are not there. The wire of a phone charger turns into a snake and writhes. Curtains move with the window closed. Some of this feels threatening and some does not, yet the people around me see none of it, carrying on a regular conversation. Dementia with Lewy bodies is a common and distressing variant of the condition. Visual hallucinations are one symptom.

Although its purpose is public-spirited, Silver Wood is very much a business, with its roots in the design of nursing homes. It has been offering the simulations as Virtual Reality Dementia Experiences for local governments, education boards and hospitals and has had 12,000 participants since 2016.

Mr Shimogawara would like to make his dementia simulations more widely available. He sees a worldwide market for them as software applications, especially in Asian countries where populations are ageing rapidly, such as China.

Achieving that will require a step up in quality. “One of main issues is making the experience interactive,” he says. At present, the simulations are 360-degree videos; a user can change what they see by moving their head, but the story always plays out the same.

Making a big social impact will depend on showing the simulations to people who do not care about dementia rather than just those who are interested enough to seek them out.

“In the world we need to support each other, but to create an environment for that, we need to know how other people feel,” says Mr Shimogawara. “Using virtual reality, people can experience what the world is like for people with dementia and understand it for themselves.” 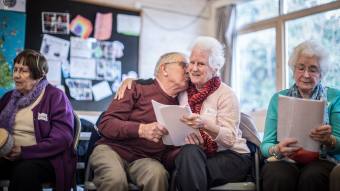