With new coronavirus infections falling fast, Scotland now seems to have a real chance to effectively eliminate Covid-19 transmission among the general public. But some experts warn that one big obstacle stands in its way: England.

Despite much higher levels of infection and hospitalisation, the UK government has since May been easing England’s lockdown restrictions more rapidly than the devolved governments in Edinburgh, Cardiff and Stormont.

The end of an earlier lockdown lockstep has led to increasingly clear policy differences that are piling new strains on already fraying UK unity and has sparked fierce disputes over the possibility of introducing controls on visitors from England to Scotland.

Devi Sridhar, professor of global public health at the University of Edinburgh, said Scotland had turned towards a “zero-Covid strategy” in recent weeks, but this was made more difficult by the UK government’s readiness to allow the virus to continue to “run through” the English population.

“I don’t think we’ll ever get to effective elimination if we have an open land border with a place that doesn’t have a similar policy,” said Prof Sridhar, who is a member of a group advising the Scottish government on Covid-19.

Mark Drakeford, first minister of Wales, had suggested that fully curbing coronavirus in the country could be impossible if England took a different approach. In normal times, more than 130,000 people cross the border daily for work, and Wales has been seeing similar numbers of new cases as England, despite its more cautious lockdown easing.

“Whilst we are working to eliminate the virus, the nature of our porous border with England means we are reliant on our neighbours doing the same,” Mr Drakeford said.

Northern Ireland has also been more cautious about easing coronavirus restrictions than England, despite far lower numbers of deaths and only 26 positive tests for Covid-19 in the seven days to July 2. Leaders in the region are increasingly concerned about a threatened second wave.

A number of experts and many business leaders across the UK are supportive of Prime Minister Boris Johnson’s more rapid lockdown easing, and say that quickly rebuilding the economy is vital to reducing the huge social and health damage inflicted by the crisis.

There are also worries about the cost of trying to achieve effective elimination — which means ending general transmission of Covid-19 and using testing and tracing systems to quickly spot individual case, coupled with action to limit imports of the virus from abroad.

Opposition Scottish Conservatives have repeatedly accused Nicola Sturgeon, first minister, of moving too slowly to ease restrictions on the hospitality and retail sectors, saying the pro-independence Scottish National party leader is trying to drive a wedge between Edinburgh and London.

But other experts would prefer England to adopt the more cautious approach of the devolved nations, and applaud Ms Sturgeon for trying to “come as close as it is possible to get to eliminating this virus in Scotland”.

Susan Michie, professor of health psychology at University College London, condemned Mr Johnson’s decision to reopen indoor pubs in England as a “disaster waiting to happen” that was “exactly what we should not be doing”.

Scotland should “keep on going in that careful, cautious way, because it is obviously showing massive dividends compared to south of the border”, Prof Michie told the BBC’s Good Morning Scotland on Thursday.

While coronavirus-related death rates in Scotland remain only slightly below those of England, other important measures of the pandemic have diverged.

Scottish government modelling suggests the number of infectious people has fallen by more than a quarter each week since mid-May.

But in England, a pilot survey for the Office for National Statistics suggests progress in reducing the number of infected people has stalled. “Incidence appears to have decreased between mid-May and early June 2020, but it has also since levelled off,” the survey found.

In a signal of the growing tensions over coronavirus policy, all three devolved governments on Friday declined to immediately endorse UK plans for “air bridges” that would exempt travellers to England from scores of countries from quarantine requirements.

Ms Sturgeon said she wanted a UK-wide approach to quarantine for “obvious practical reasons”, but suggested Scotland’s much lower Covid-19 prevalence meant that visitors from countries with levels of the virus that were acceptable to England may not be able to travel north of the border without quarantine.

Some experts say quarantine on visitors from England may be needed to prevent continual new outbreaks in Scotland, a prospect that Ms Sturgeon has refused to rule out — to the outrage of some opponents of Scottish independence.

Mr Johnson on Wednesday even went as far as to deny the existence of the 150km dividing line between the two ancient nations, beyond which the UK prime minister’s writ on matters such as health, education and transport does not run. “There is no such thing as a border between England and Scotland,” he told the House of Commons.

A spokesperson for the UK government said it continued to engage closely with the devolved administrations. “From the very start we have been tackling the pandemic as one United Kingdom, following the best scientific and advice and the guidance of the four chief medical officers,” the spokesperson said.

Prof Sridhar, who was accused by Scottish Conservative politicians of being politically partisan after she posted a tweet criticising Mr Johnson’s handling of the pandemic, told the Financial Times that effectively eliminating coronavirus would require extending lockdown measures in the short term and indefinite controls on visitors from abroad.

But she said success would allow a far greater easing of domestic restrictions and a return to normal life for vulnerable groups currently enduring shielding policies.

“If you open too early and the virus is still circulating, then you just have to shut down again,” Prof Sridhar said. “It’s always going to be a lurking threat.” 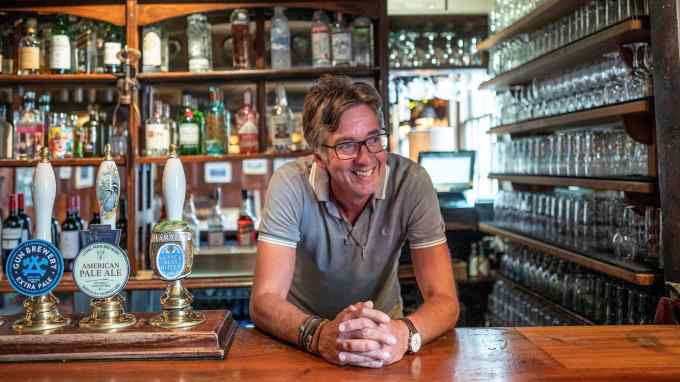