Frequent flyer: tales from the lost and found

Where is the best place in the world to lose your property?
Michael Skapinker

My story last month of leaving my Kindle on a flight from Dubai prompted many readers to email me their experiences. As I read the messages, a map began to form. The further east you travelled, the greater were the chances of getting your goods back — often with astonishingly good grace.

There were some decent lost property services in the US and Europe, but more typical was solicitor Nicolas Greenstone’s account of leaving his Kindle on an easyJet flight from London to Athens. The airline denied all knowledge of it.

“This news induced near panic as my wife and I were heading for a seven-day cruise,” he wrote. His search for suitable English-language books in Athens ended in failure. “The prospect of a literary-free week was depressing. Happily, the cruise ship library catered well for Kindle losers.”

The Middle East and Asia were different. “The best place to lose something is Japan,” Aran Williams, a British immigrant to Sweden told me. After a two-week trip to Kanazawa, Kyoto and Tokyo with his wife and three daughters, the family took the train to Narita airport for the journey home. Williams walked up to the Japan Airlines check-in to present their passports. Except he had no passports; they had disappeared between the hotel and the airport.

“It was Saturday morning, and we were all due at school and jobs again on the Monday. The prospect of trying to visit consulates on Monday in Tokyo to gain temporary passports, find accommodation and new flights home made me nauseous. ‘How could I be so stupid?’ was my thought, and certainly that of the rest of the family.”

The JAL staff got onto the phones. A short while later they said the passports had been found. The airport train cleaners had handed them in. “This had all happened within 30 minutes of us getting off the train,” Williams said. 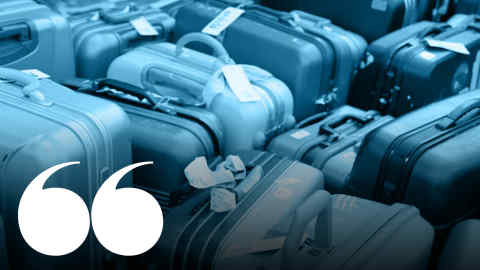 Could anyone top that? Flying Emirates from Dubai to Singapore, Trudie Roberts, a professor at the Leeds Institute of Medical Education, left a notebook and papers she had been working on in the seat pocket. “The value to anyone else was nil but I was cross with my own absent-mindedness and the effort it would take me to recreate the ideas. More in hope than expectation I contacted the Emirates lost property section.” A week later, when she checked in for her return journey, the Emirates staffer at the counter frowned at her screen and picked up the phone. “I feared the worst — something wrong with my ticket or connection,” Prof Roberts wrote. “A moment later her colleague appeared with a sealed plastic envelope containing my notebook and papers.”

Only one western experience came close. It wasn’t an airline or airport but a New York cabbie. By the time Michael Garin realised he had left his iPad in a taxi, the cab had disappeared. It was the Wednesday before Thanksgiving and no one at the Taxi & Limousine Commission answered the phone. The next week, Garin was telling his tale to yet another New York taxi driver. Did he still have his original cab receipt, the driver asked. He did. The driver handed him his own mobile phone and Garin was soon speaking to Commission, now staffed, and then to the original driver. Not only did the cabbie have the iPad; Garin was flying to Paris that evening and the taxi driver offered to meet Garin at the airport to hand it over.

So, if you’re the losing sort, choose your airline carefully — and keep your taxi receipts.