Bank of England intends to open its vaults to tech companies

The Bank of England intends to throw open its vaults to tech companies for the first time, allowing them to bank at Threadneedle Street and thereby offer payments systems on a level playing field with commercial banks.

Allowing all payment providers to store funds overnight in interest-bearing accounts at the central bank would help achieve the goal that “similar activities should be regulated consistently”, according to BoE governor Mark Carney speaking at the annual Mansion House dinner, which was interrupted at one stage by climate protesters.

The move will be seen as a threat to banks, which have exclusive access to BoE payments operations and can make money from acting as intermediaries to other payment providers.

The policy is in line with Mr Carney’s “open mind but no open door” approach to Facebook and its proposed digital currency, Libra. The sterling funds underpinning Facebook’s token would be offered a safe interest-bearing account, relieving the tech company of banking charges and the risk that its commercial banking partners could go bust.

Mr Carney insisted that only companies that met strict standards would gain access to the BoE’s banking services.

“Unlike social media, for which standards and regulations are being debated well after it has been adopted by billions of users, the terms of engagement for innovations such as Libra must be adopted in advance of any launch,” Mr Carney said. 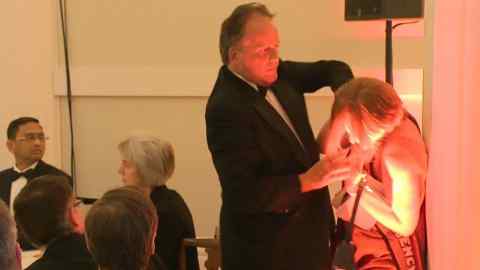 But he was clear that he favoured throwing open the doors to improve competition and stimulate innovation in payments systems.

At present only commercial banks can store money — usually overnight — at the BoE, which is guaranteed to be safe as it is backed by the central bank’s ability to create money. Mr Carney said that offering the BoE’s services to others, which would come only after a period of consultation, would help increase competition in payments systems and reassure the public of their safety.

By giving access to ultra-safe and cheap banking services to new payment providers, the BoE hopes it can support financial stability, allowing payment systems to continue to operate even if big banks go bust and at a lower cost for potential users such as Facebook.

“Users should benefit from the reduced costs and increased certainty that comes with banking at the central bank,” the governor said. “From the perspectives of UK households and businesses, wider access can improve inclusion and services.”

The move by the BoE comes just two days after Facebook formally unveiled its plans for a digital currency, known as Libra, that the tech group hopes will upend the delivery of financial services around the world.

Its plans have prompted a cautious response from policymakers and regulators, who welcome its stated aims of making payments across borders cheaper and more efficient, but who foresee a number of regulatory problems — from money-laundering and tax evasion concerns through to data protection issues.

However, Philip Hammond told the City audience on Thursday evening that the UK’s financial services sector would need to “embrace change, disruption and challenge” in order to remain a dominant global player after Brexit.

The UK chancellor was announcing the launch of what he called a “major long-term review” to lay the groundwork “for the more global nature of our future financial services industry”.

While waiting for clarity on Brexit, Mr Hammond said that the first stage would be to improve co-ordination between regulators, in response to calls from the industry for “greater air traffic control” to manage the rollout of regulatory changes.

The chancellor’s speech was disrupted by a dozen women in red dresses and sashes bearing the slogan “climate emergency”.

“Business as usual is no longer an option. This is a climate emergency,” they chanted.

After a five-minute interruption, Mr Hammond resumed his speech by saying: “The irony is this is the government that has led the world by committing to a zero carbon economy.”

The protesters, comprising the red-sashed women and a group of men dressed in evening dress filming them on smartphones, were also carrying speakers that blared emergency alarm noises. It took security personnel five minutes to eject the protestors.

Mr Carney’s address at the event insisted that “the terms of engagement for innovations such as Libra must be adopted in advance of any launch”.

Mr Carney spoke as the BoE introduced sweeping plans in response to a 147-page report on the future of finance by Huw van Steenis, the former Morgan Stanley analyst who is now a senior adviser to Mr Carney.

Mr van Steenis called for a National Payments Strategy Council, which would include broadband and telephone providers, as well as regulators, to grapple with wider questions about the future of payments, and suggested that state intervention may be necessary.

Traditional lenders are eyeing developments nervously as tech companies with huge brands and billions of customers move from service providers to competitors. 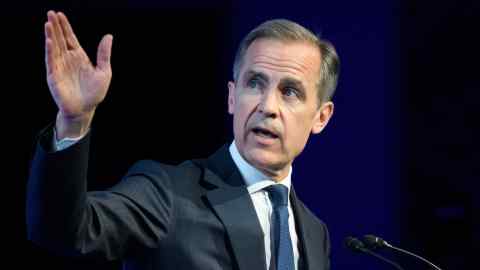 The BoE said it wanted to “facilitate” adoption of the cloud as an alternative to outdated and patchy IT systems that banks until now have relied upon. But there are concerns about banks’ use of online storage services, such as what would happen if one of the big providers went down or how banks can negotiate moving from one cloud provider to another.

The BoE also confirmed that it would press ahead with plans — first floated in the Financial Times late last year — to include climate change as part of its annual stress tests of lenders’ balance sheets. It will first be included in the 2021 tests, with more detail expected this autumn.

The central bank will also begin simplifying its rule book for banking supervisors to make it machine readable over the next three to five years.