Get the newsletter now
Eurozone economy

Appointment is milestone for country 10 years after its eurozone bailout

Ireland’s Paschal Donohoe has won the contest to become the next president of the eurogroup of eurozone finance ministers, beating candidates from Spain and Luxembourg to take the powerful post.

Mr Donohoe prevailed in a head-to-head run-off against Spain’s Nadia Calviño in a final round electronic vote carried out by the 19 ministers of the eurozone.

Although the ballot was secret, his triumph is a blow for the single currency area’s four biggest member states — Germany, Italy, France, and Spain — which publicly said they backed Ms Calviño for the job.

His nomination marks a significant milestone for Ireland 10 years after the country was the recipient of a eurozone bailout during the financial crisis.

Following his victory, Mr Donohoe said he would “bring to the table Ireland’s experience as a small member state that has been a programme country but which has also seen its economy and society transformed through EU membership”.

Ireland’s finance minister takes the helm of the eurogroup during the EU’s worst economic crisis of the modern era. Having been the crucible of decision-making during the eurozone’s sovereign debt crisis, the eurogroup has been diminished in recent years, riven by divisions between northern and southern capitals over the question of further integration in the single currency area.

One of Mr Donohoe’s first tasks will be to try to exert an influence over the EU’s planned €560bn coronavirus recovery fund as member states jostle over how to police the disbursing of aid to crisis-hit economies.

“The first priority for all of us in Europe is to ensure that the recovery fund can be a reality and that it can be meaningful in allowing our citizens to get jobs back and supporting employers,” Mr Donohoe said after the vote.

He added that ministers would also need to think about how to revamp the eurozone’s budgetary rule book but only once the immediate phase of the crisis was over.

In his pitch for the job, Mr Donohoe said he wanted to act as a “bridge” between the northern and southern areas of the eurozone which have been increasingly at loggerheads over the recovery plan and previous plans to set up a eurozone budget. 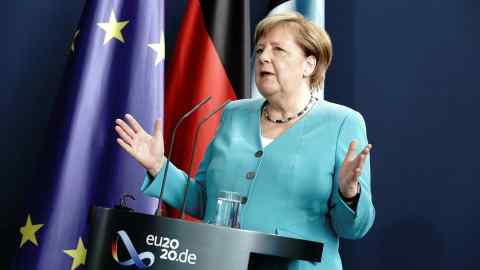 Ireland has been allied with a group of small, fiscally conservative “Hanseatic League” nations but has also backed the European Commission’s bid to borrow hundreds of billions of euros to support the economies worst hit by the pandemic.

The 45-year-old minister is a member of Ireland’s centre-right Fine Gael party and becomes the first conservative to take charge of the eurogroup since 2013. The post has in recent years been held by social democrat ministers, with the previous occupant being Portugal’s Mário Centeno. Mr Donohoe will serve for a two-and-a-half-year term.

Spain’s Ms Calviño was considered an early frontrunner in the race but ultimately her candidacy seemed to have polarised ministers.

Mr Donohoe’s victory suggests that the bloc’s smaller northern and eastern member states all backed the Irishman in defiance of the preferences of bigger member states. “I had a wide group of countries from all political families backing my tenure,” Mr Donohoe said.

Luxembourg’s Pierre Gramegna withdrew from the race after he failed to win enough support after the first round of voting.