The return of American exceptionalism

Until recently most of the world yearned for the US to become a more normal country. It had seen enough of George W Bush’s freedom agenda to put it off American exceptionalism for good. People should be careful what they wish for. Donald Trump may be the most gaffe-prone — and offensive — US presidential nominee in history. But he is also the first to scorn the belief that America’s mission should be to uphold universal values. It is not clear he even thinks such values exist. Hillary Clinton, on the other hand, is their unabashed cheerleader. “I believe with all my heart that America is an exceptional country,” she said in June. “We are still, in Lincoln’s words, the last best hope of earth.”

Long-suffering US realists — those who argue that America should merely pursue its national interests — must wonder what they did to deserve such a champion. Mr Trump vows to avoid foreign entanglements, such as pre-emptive wars in Iraq. That is what realists want to hear. Ditto for Mr Trump’s view that America’s allies should pay for more of their defence, or that China is entitled to occupy atolls in a sea named after it. Why should America always play the referee? But Mr Trump inevitably spoils things by adding his own gloss — promising a nuclear attack on Isis, for example, or claiming that President Barack Obama founded the terrorist group. The key to successful realism is tactical guile and deep knowledge of the world. Mr Trump epitomises the opposite. With friends like Mr Trump, realists need no enemies.

There is also the likelihood that he will lose to Mrs Clinton in November. Mr Trump’s defeat would probably come in spite of his foreign policy instincts, rather than because of them. For years, the US public has said it is tired of military adventures, thinks Nato allies should shoulder more of the burden and that America’s global role should be more modest. Nation-building is no longer an election winner, if it ever was one. Mr Trump’s “America first” slogan might have unfortunate antecedents (it was picked up by Fascist sympathisers in the early 1940s), but many Americans are happy with its current meaning. If he loses it will be because of his manifestly unpresidential temperament and a tendency to insult almost every group in America.

Unfortunately for realists, their ship may go down with him, which means the USS Exceptionalist would set sail again under Mrs Clinton next January. Where was it during the Obama years? Mr Obama’s foreign policy has been neither exceptionalist nor realist but a hybrid of the two. A few weeks after he took office, I asked whether he subscribed to the school of US exceptionalism. Mr Obama replied that he was a US exceptionalist in much the same way that “Brits subscribe to British exceptionalism, and Greeks subscribe to Greek exceptionalism”. His creed, in other words, was avowedly subjective. Given how harshly Mr Obama’s critics have questioned his patriotism, his answer today may be less ambivalent. It is hard to imagine Mrs Clinton saying that. A true exceptionalist leaves no room for doubt. They believe the US stands taller and sees further than other nations, as Madeleine Albright, the former secretary of state, once said.

What would this mean for a Clinton administration? Unexpected events would dictate much of her presidency, as is always the case. Ronald Reagan’s struggle with the Soviet Union’s “evil empire” was rendered moot by the rise of Mikhail Gorbachev. Bush junior took office promising a humbler foreign policy. He pivoted quickly to hubris after the 9/11 attacks. Mr Obama promised to wind down the wars in Afghanistan and Iraq. He will leave office with thousands of US soldiers in each country. Bill Clinton, meanwhile, vowed to uphold human rights and confront the “butchers of Beijing”. To his lasting regret, he turned a blind eye to the 1994 genocide in Rwanda. This was largely because of what he learnt from another event — the “Black Hawk down” debacle in Somalia. He also brought China into the World Trade Organisation. In each case, however, the president’s philosophy shaped how they responded to events. 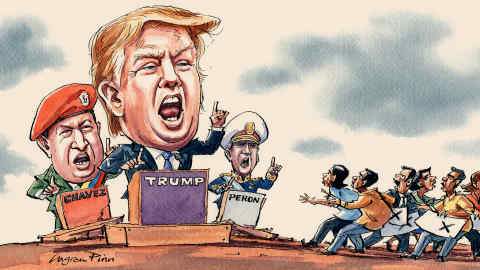 Many assume that Mrs Clinton would simply pick up the baton from Mr Obama, since she was his first secretary of state. But serving a president is very different from being one. On each military question that arose in Mr Obama’s first term, Mrs Clinton took the hawkish view. Sometimes she was on the winning side, such as on intervention in Libya. At others, such as on whether to arm Syrian rebels, her advice was overruled. In spite of her early involvement in the Iran nuclear talks, it is doubtful if she would have signed Mr Obama’s deal.

Her campaign rhetoric is also strikingly different from Mr Obama’s. In 2008 he pledged to revive America’s moral authority in a world reeling from Mr Bush’s wars of choice. She vows to engage with a dangerous world with all the tools at her disposal. It is a different sensibility.

Mr Obama once summed up his approach to foreign policy as “don’t do stupid shit”. In a rare critical moment, Mrs Clinton said Mr Obama’s maxim did not amount to an organising principle. She was right, of course. But in these hazardous times, the instinct to first do no harm may be worth more than we can appreciate.

Get alerts on Hillary Clinton when a new story is published