We use cookies (opens in new window) for a number of reasons, such as keeping FT Sites reliable and secure, personalising content and ads, providing social media features and to analyse how our Sites are used.
Manage cookies
Accept & continue
Philanthropy

Facebook has proposed an arrangement that will allow Mark Zuckerberg to maintain long-term control while pursuing his charitable giveaway, by creating a new class of stock with no voting rights.

The company announced the proposal at the same time as it beat earnings and revenue expectations, after posting a 52 per cent surge in first-quarter sales, bucking a trend this earnings season that has seen Apple, Twitter, Microsoft and Google’s parent company Alphabet disappoint investors.

Shares jumped as much as 9 per cent in after-hours trading to more than $119 each.

Facebook has proposed a class C of stock — echoing an arrangement implemented by Alphabet last year — as Mr Zuckerberg’s voting control has fallen from 67.2 per cent to 60.1 per cent in the past two years.

Mr Zuckerberg pledged last December to give away 99 per cent of his stock to fund health, education and environmental causes before he dies as part of the Chan Zuckerberg initiative launched with wife Priscilla. Mr Zuckerberg still intends to sell no more than $1bn of his Facebook stock each year for the next three years.

If approved at the annual shareholders’ meeting in six weeks, the new class C stock would also give the social network currency for acquisitions or to allot to employees without diluting Mr Zuckerberg’s control of the company. As Mr Zuckerberg presently maintains control, the measure seems likely to pass.

Mr Zuckerberg argued that being a “founder-led company” had helped Facebook focus on its mission. “This structure has helped us resist the short-term pressures that often hurt companies,” he said, adding it had also helped the company invest in new apps such as Instagram, which it purchased for $1bn.

Speaking about his philanthropy, he said he felt a “responsibility” to help cure all diseases by the end of the century, upgrade the education system and protect the environment from climate change. 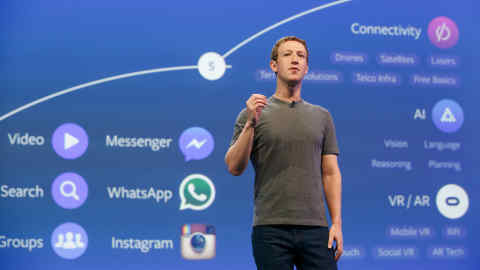 Colin Stretch, general counsel, said the new structure would allow Facebook to focus on Mr Zuckerberg’s vision for the company, and by “encouraging Mark to remain involved with Facebook in a leadership role”, it would be “mitigating succession risk”.

“This is not a traditional governance model, but Facebook was not built to be a traditional company,” he said, in an echo of Google’s founder’s letter, sent ahead of its initial public offering in 2004.

Facebook already has two classes of stock, with class B shares holding 10 votes to each class A single vote.

Under the proposal, Facebook will issue holders of class A stock with two more class C shares, in a 3-to-1 stock split. The class C stock will probably trade at a discount to the A shares because of the lack of voting rights.

Alphabet’s class C shares trade at a 2.2 per cent discount to the A shares. When Google created its class C stock, it settled a shareholder lawsuit by paying out $522m.

In the first quarter, Facebook reported earnings per share on a non-GAAP basis of 77 cents, significantly beating the consensus analysts forecast of 62 cents. Net income was $1.5bn on a GAAP basis.

Revenue at the world’s largest social network was $5.38bn, just above the average analyst estimate for revenue of $5.3bn, and up from $3.5bn in the same quarter the year before. 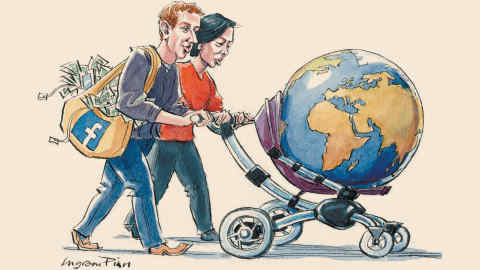 The social network continued to grow its userbase, with monthly active users up 15 per cent year over year to 1.65bn. More than a billion users logged on every day on average in March 2016, for 16 per cent growth year-on-year.

Facebook unveiled its longer term plans earlier this month at its F8 developer conference in San Francisco, where Mr Zuckerberg spoke about Facebook’s 10-year plan that he said centred around spreading connectivity around the world, developing artificial intelligence and virtual reality. It hired Regina Dugan from Google, poaching the former director of the US research agency Darpa to lead a new research and development lab.