If you think the same, join us
Coronavirus: free to read
See all 129 stories
The Big Read Coronavirus pandemic

When Donald Trump launched Operation Warp Speed last week, he borrowed language from Star Trek to describe the drive for a Covid-19 vaccine. “That means big and it means fast,” the US president said, promising an effort “moving on at record, record, record speed”.

His hope that a coronavirus vaccine might be ready “prior to the end of the year” was even quicker than the optimistic — but often repeated — timeline for a vaccine to be ready in 12 to 18 months.

The race for a vaccine appeared to be picking up pace this week when Moderna, a Boston-based biotech company, unveiled early positive results for its potential vaccine in a small trial — and AstraZeneca said it could have the first doses of another vaccine delivered by October if trials are successful.

The announcements pleased politicians trying to offer hope to citizens desperate to leave lockdowns and investors eager for economic activity to return.

But many scientists feel a duty to damp the enthusiasm. They say a vaccine could take much longer because little is known about the disease and how bodies will react to attempts at immunisation. In fact, some warn we may never create a vaccine for Covid-19.

Soumya Swaminathan, chief scientist for the World Health Organization, believes an optimistic scenario is a vaccine produced in the “tens of millions” next year, which would be mainly distributed to healthcare workers, and far larger volumes in 2022. To inoculate the world and defeat Covid-19 could take four to five years, she says.

We have no “crystal ball” to tell the future, she told the Financial Times. “It depends how the virus behaves: whether it mutates, whether it becomes more or less virulent, more or less transmittable.”

Peter Hotez, a professor at the Baylor College of Medicine in Houston who is developing a vaccine, says the US president sees vaccines as a “manufacturing problem”, like making enough ventilators or tests.

“Manufacturing is not the hurdle. It’s taking the time to collect enough efficacy and safety data,” he says. “The Operation Warp Speed language coming out of the White House and biotechs and pharma companies [saying] that they will have a vaccine by the fall — or in weeks or days — does so much damage.”

Vaccines are usually developed over many years and even decades. A 2013 paper from Dutch scientists says the average vaccine took 10.71 years and had only a 6 per cent success rate from start to finish. Each stage is an experiment: from the small phase one trials happening now to the large phase three trials needed for regulatory approval.

There are good reasons to believe this time will be quicker. The Covid-19 vaccines benefit from groundwork done for the Sars and Mers coronaviruses even if they were never approved, says Walter Orenstein, a professor at the Emory Vaccine Center in Atlanta.

New technologies are fuelling the hope for a faster process. Analysts from Morgan Stanley estimate that Moderna’s vaccine has a 65 per cent chance of success. They believe that before the end of the year we could see vaccines from Pfizer and their German partner BioNTech, and AstraZeneca and Oxford university.

But advances like the messengerRNA programming used by Moderna, BioNTech and another German company, CureVac, have never been used to create products approved by a regulator. The technique translates a protein from the virus into human cells and shows it to the B cells that secrete antibodies.

The pandemic has pushed governments and companies to pour money into Covid-19 vaccines, even if there has been a lack of global co-operation. Peter Bach, director of the Center for Health Policy and Outcomes at Memorial Sloan Kettering, says it helps that there are so many horses in this race.

Proving that a vaccine is safe and effective takes time. Participants need to be exposed to the virus to prove a vaccine works. That probably means recruiting thousands of people across the world to ensure enough live in an area where there is an outbreak, unless vaccine makers opt for the ethically complicated human challenge trials, where participants are deliberately infected.

“I don’t want to be a Debbie Downer but let’s be clear: to get a vaccine by 2021 would be like drawing multiple inside straights in a row, to use a poker analogy,” Dr Bach says.

To fight a war, it helps to know your enemy. Originally considered solely a respiratory disease, Covid-19 has launched surprise attacks from our eyes to our toes. It appears to use different tactics in children, with reports of some suffering from a serious inflammatory condition.

Moderna announced early results from its phase one trial on Monday, showing its vaccine had elicited immune responses at least as robust as those found in recovered patients.

But some scientists questioned how the trial defined an average patient response. Dr Hotez says the release came days after a study showing that recovered patients only had a low level of antibodies. Umer Raffat, a biotech analyst at Evercore, says it will be important to know when the convalescent antibody level was tested — because it tends to fade over time. If it is tested later, it might not be such a promising comparison.

There are big questions about how long an immune response protects patients for. Most scientists think having had the disease confers some immunity — but we don’t know how long it lasts. Immunity to Sars only lasted a couple of years.

So far, the virus behind Covid-19 has not mutated significantly, so it shifts shape less rapidly than the flu. But we have only been following the virus for months, so there is a risk that it will still mutate. Most vaccine makers are focusing on the ‘spike’ protein, which it uses to invade cells. They try to teach the body to recognise this protein and produce antibodies. If the spike changes, many of the potential immunisations would miss their target.

Early trials are done in healthy, younger populations: Moderna’s first results were from people aged 18 to 55. But it is people over 65 who have suffered the most from Covid-19 and whose immune systems tend to be less responsive. The US National Institute of Allergy and Infectious Diseases is adding an older age group to the trial.

Howard Koh, a former US assistant secretary at the health department, says: “One issue that often comes up is whether older people are able to generate a response that makes it an effective vaccine.”

Mr Trump is not the first president to see a vaccine as a way of neutralising the political risk carried by a virus. In 1976, Gerald Ford rushed out a vaccine for what he feared would be a massive outbreak of swine flu, having his photo taken getting the shot at the White House. But the vaccine had a serious side-effect: hundreds of people developed Guillain-Barré syndrome, where the body is paralysed by the immune system attacking the nerves.

Covid-19 has proven to be the pandemic that the 1976 swine flu never became. But easing requirements for approval could put vaccines on the market before we discover all the side-effects. In the US, the loosening of regulations during the pandemic has already led to battles over safety and accuracy. Government agencies and doctors have disputed whether it is safe to treat patients with hydroxychloroquine, an antimalarial drug being used by Mr Trump that has cardiac and psychiatric side-effects, and the Food and Drug Administration has warned about the inaccuracy of many antibody tests.

Scientists have still not ruled out the grim prospect that a vaccine could make the disease worse. In some conditions including dengue fever, and the common childhood respiratory infection RSV, vaccines have actually enhanced the disease. In the first attempts at making a Sars vaccine, there was some immune enhancement in animal testing. So far, there is no evidence that this is a problem for Covid-19 — but the early trials are on tens, rather than hundreds or thousands of people.

If a vaccine proves safe, there will still be questions about its effectiveness. Paul Stoffels, chief scientific officer at Johnson & Johnson, says one of the biggest questions is whether it will stop infection or just the disease — or even, like the flu shot, only prevent the most severe symptoms of the disease.

“It would be good if it protects against both,” he says. “If you can prevent infection, it prevents spread going forward in the community.”

Before a vaccine is produced, developments in treatments — such as antivirals and antibodies — may help improve outcomes for Covid-19 patients. A vaccine that is only 60 or 70 per cent effective could still be approved by the regulator and have a significant impact on the spread of the disease, says Stéphane Bancel, Moderna chief executive.

He is “cautiously optimistic” he will see efficacy in the large and final phase three trial — but does not know if it will be 70 or 95 per cent. “Even if it was 70 per cent effective it would reduce tremendously the problem, which is that the virus is so contagious,” he says.

Political leaders will declare victory if a vaccine maker manages to move safely at speeds more suited to science fiction. However, the mass inoculation that could speed up the return to normal life is further away. The first vaccines will probably be given to healthcare workers who will be studied closely, as if they were still part of a trial. 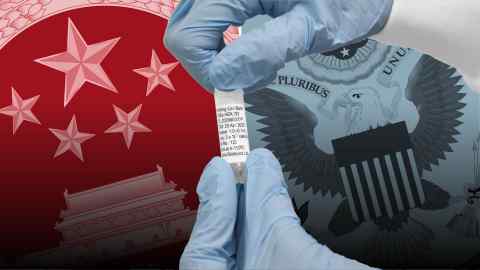 Michael Osterholm, director of the Center for Infectious Disease Research and Policy at the University of Minnesota, says we must remember there is still a chance we do not get a vaccine at all. It is not a “slam dunk”, he says.

He is concerned that people are not taking other public health measures to stop the spread because of the “optimism and enthusiasm” about a vaccine.

“People will just assume it’s like a Hollywood movie and at the very last minute, someone will swoop in their helicopter with a new vaccine that was only made a day ago. And the whole world is saved,” Mr Osterholm says. “It’s human behaviour. When you’re faced with such a serious challenge, you want any good news you can get.”

Explore the series
READ MORECoronavirus: free to read
Will antibody tests be our passport to normality? | Free to read 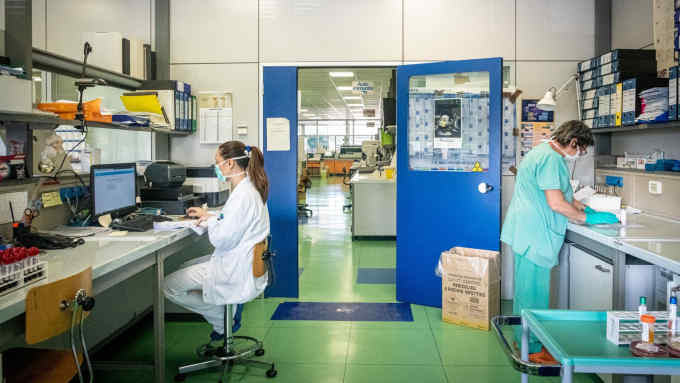