Should mega-galleries subsidise the smaller players?

Art fair costs are taking their toll on the ‘squeezed middle’

As 290 of the world’s most respected galleries prepare to sell their wares at Art Basel this week (June 14-17), the talk of the market continues to centre on the “squeezed middle”, namely those many businesses in the broad area between mini-empires and exciting emerging outfits.

It’s a whispered conversation that Art Basel put in the spotlight earlier this year when the fair and UBS published their annual art market report. It found that, at art fairs specifically, “the biggest rewards have likely accrued to those at the top end”. Then, at the end of April, mega-dealer David Zwirner publicly floated the idea that larger galleries could “pay a little more” to exhibit, in order to support younger businesses.

This put the onus back on to the art fairs themselves, which are described by several exhibitors as “double-edged sword” or “Catch-22” events. Devised as a way for individual galleries to have the same clout as the ever-growing auction houses, art fairs have proved a successful and popular way to galvanise mass art world attention — and currently average at an astonishing five events a week, around the world. At the same time, they cost a lot of money and take a great deal of effort to do, and that’s before a plethora of associated costs kick in.

So far only a handful of other big-league players have gone on the record to support Zwirner’s suggestion, and taking it to its logical conclusion may not even help that much. “It’s great that larger galleries want to be part of a solution. But even if the top 20 of 290 galleries were generous enough to pay 20 per cent more [assuming a CHF100,000 booth rental], that still only leaves around CHF400,000 to share between the remaining 270,” says Marc Spiegler, director of Art Basel. He’s got a point: CHF1,500 doesn’t stretch very far.

The winner-takes-all problem seems to go well beyond booth rental anyway. Antonia Bergamin, co-director of São Paulo’s Bergamin & Gomide gallery, says that moving works, particularly from Brazil to Basel, is “very, very expensive”. This year, shipping alone is costing her an additional CHF15,000 to CHF20,000, and “I’m not even bringing huge works,” she says. Her heaviest piece — Sergio Camargo’s marble “Untitled (#644)” sculpture (c.1988/90, priced at $120,000) — weighs around 50kg. As a historically focused gallery, the problem may be less acute for her than for others, she says: “Works seem to get bigger the more contemporary they are!”

Another issue that Bergamin and others highlight is that the larger, wealthier galleries can afford the extras that make a booth stand out. Flowers, lighting, installation and even furniture for conducting high-end negotiations can make a dramatic difference. “We believe we are at the same level curatorially, but we can’t always look as though we are,” Bergamin says. She hopes that the quality of the historical South American works she is bringing will help the cause, including Mira Schendel’s tempera on jute work, “Untitled” (1963), which the artist “painted” with her fingers ($400,000).

Larger galleries can afford the extras …Flowers, lighting and even furniture can make a difference

Bergamin is among the 10 galleries at this year’s Art Basel that have graduated from its curatorial sections such as Statements (for emerging works) and Feature (for established or historical artists). These require a theme to be pitched each year, so there’s no certainty of returning, and their precise requirements limit galleries to a riskier strategy of only showing a small part of their programmes. Spiegler says that offering gallerists a place on its main stage, where they have more certainty of remaining, represents a fundamental shift and is a way that Art Basel can support smaller players.

Booths in the main fair tend to be bigger so cost more on average but, says London dealer Kate MacGarry, who last year showed in the Statements section, the difference can be made up fast. “Last year, the cost of mounting our Samson Kambalu installation [including seven films and projectors] immediately doubled the cost of showing and we were limited to making back the value of the work [£45,000].” The work did sell after the fair, helped by the fact that she was there, she says, but this year a wider selection of works means she can potentially make more money. The most expensive work on her booth is a politically charged 3D tapestry by Goshka Macuga, “Make Tofu Not War” (2018), at £80,000, while other works include Kambalu’s haunting photo collages of the Kenyan politician Tom Mboya (1930-1969) and Barack Obama (“Mboya Series”, 2016, £15,000).

There are also the opportunity costs of being on the road. “Time away from the gallery is time away from our primary constituents, the artists and artists’ estates,” says New York dealer Alexander Gray, another newcomer to the Galleries section this year. He believes that the curatorial efforts that smaller galleries have to make in fact culturally “subsidise” the larger players.

“There’s a pressure on us to take risks, to bring new artists or new narratives to the market. It’s part of the eco-system that the bigger galleries don’t need to do this,” Gray says. Indeed, many of the mega-galleries can — and are expected by their clients to — bring a selection of their greatest hits. Pace, for example, has works by Jean Dubuffet, Robert Rauschenberg, Kiki Smith and Leo Villareal among its offerings.

Gray’s cultural currency — of bringing overlooked, historical artists to the fore — certainly chimes well with today’s market. His booth at Art Basel this year includes several of the African-American artists from the 1960s and 1970s that he has long championed, including Sam Gilliam (who also has a coinciding show at Basel’s Kunstmuseum, until September 30), Jack Whitten and Frank Bowling (booth prices range from $15,000 to $1.5m).

Ultimately, Gray says, “a gallery is like any other small business, you’re always feeling the pressure of overheads”. MacGarry says that she has held back on doing too many fairs for a while: “Being very conservative is why I’ve survived.” But when it comes to Art Basel, she says, “You can’t not be there.”

What’s on: auctions and events

This cross-collecting fair offers everything from art and design to furniture and jewellery, ranging from antiquity to the present day. This year’s edition also features “Five Stages of Maya Dance”, a new work by Marina Abramović made with Factum Arte for the Masterpiece Presents programme. The piece consists of five luminous alabaster portraits: “Performance is an immaterial form of art,” Abramović says. “At this time in my life, facing mortality, I hence decided to capture my performance in a more permanent material than just film and photography.”

This twice-yearly event is a chance to see some of the best pre-contemporary art for sale in the capital, from classical sculpture to Old Master drawing and Impressionist painting. It takes place in galleries around Mayfair, which are open late on July 3 — a pleasant alternative to the busy fair tent model. The programme of talks and events caters to seasoned collectors and newcomers alike.

Coinciding with the opening weekend of London Art Week, Mayfair Art Weekend brings together galleries dealing in contemporary and older art — from David Zwirner and Gagosian to Peter Harrington Rare Books — with a late night opening on June 29. On Sunday, Burlington Gardens hosts Bob and Roberta Smith’s “Long Artists’ Lunch”, where visitors will be served on a 15 metre-long surrealist “tablescape” by the artist duo Philip and Charlotte Colbert.

Highlights include sculptures by Barbara Hepworth, Henry Moore and Lynn Chadwick, up for auction for the first time, as well as eight works by L.S. Lowry, including a poignant painting of a father coming home from work watched by a small child in a window (estimated at £250,000-£350,000), originally from the collection of Lowry’s patron Monty Bloom. The day sale features a special separate session of prints and works on paper by Howard Hodgkin, all from his private collection.

Bonhams’ auction is led by “Donnelly’s Hollow”, a large canvas by Jack B. Yeats estimated to go for £300,000-£500,000; it is the first time the work has been displayed publicly for almost 60 years. Work by L.S. Lowry, Frank Auerbach, Tony Bevan, David Hockney and Peter Blake also features.

The pieces in Christie’s annual Sculpture in the Square exhibition in St James’s Square — including Elisabeth Frink, Barry Flanagan and William Turnbull — go up for sale here. The evening and day auctions also offer paintings by David Hockney, Ben Nicholson and Pauline Boty.

The highlight of the evening sale is Picasso’s portrait of his lover and muse Marie Thérèse Walter, “Buste de femme de profil (Femme écrivant)”. It dates from 1932, his “year of wonders” — and currently the subject of a major exhibition at Tate Modern in London. Work by Monet, Miró and Giacometti also goes under the hammer, plus modern sculpture by Jean Arp, Marino Marini and Henry Moore.

Christie’s evening auction is led by another Picasso portrait of another muse: Dora Maar. “Femme dans un fauteuil” (1942) is a striking and rarely seen work. Another highlight is Monet’s “Le Gare Saint-Lazare, vue extérieure”, one of his series of 12 paintings of the Parisian station. The day sale features work by Klee, Matisse and Ernst. 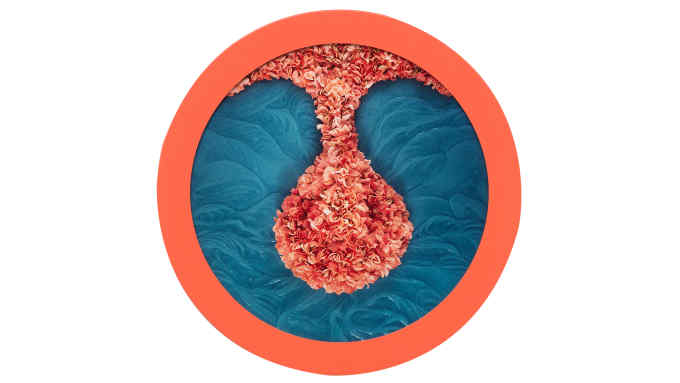