The best sparkling waters in the world

Because it’s time to take your bubbles seriously

One of my favourite video clips is one I have of my son, aged two, tasting fizzy water for the first time. In the space of a few seconds, his expression goes from curiosity, to alarm, to pure terror. And then just as he’s about to start bawling, his tear-filled eyes widen with delight. He bursts out laughing, extends the cup to the camera and bellows: “MORE!”

Fizzy water has bewitched humans since ancient times. To me, it has always felt a treat. In our house we are heavy users of the SodaStream. And yet, despite being a drinks writer, I’ve never paid much attention to the taste of the fizzy water I drink. Or I didn’t until I discovered Aqua Amore, a company that sells more than 60 types of water – and discovered how interesting sparkling water can be.

The highest grade of water is “Natural Mineral Water” – an accreditation that means the water is bottled straight from a single source (the water must also be microbiologically pure at its source). In wine terms, it’s the closest you get to water with terroir.

Some waters emerge naturally sparkling, as a consequence of geothermal activity, and it’s this miraculous family of waters that is the most interesting to me. When sizing up a sparkling water, says Aqua Amore’s Michael Tanousis, one should assess both the level of carbonation and its mineral content, also known as the TDS (this stands for total dissolved solids and is quantified in mg/l, usually on the back label). The higher a water’s TDS, in essence, the more characterful it is likely to be.

The fashionable Spanish brand Vichy Catalan (3,052mg/l) scores a very high TDS level. High in sodium and bicarbonates, it has a pronounced salty flavour and big crunchy bubbles that fill the mouth like a prawn cracker. “It’s so flavourful it could almost be a substitute for a beer,” says Tanousis. “It’s also great with vodka and lime.” The textured bottle, inspired by Gaudí mosaics, is rather beautiful, too.

A much gentler experience is Uliveto (986mg/l) from Tuscany – a mineral water with a softly savoury taste and very fine, pin-prick bubbles. Subtle and thirst-quenching, this would be a good partner for food. Meanwhile, Vals (1,100mg/l) from the Ardèche in France is like a mouthful of diamonds – extremely clean with the merest hint of salt.

I also love the minty-fresh Badoit from the Loire and Portuguese brand Pedras Salgadas, which combines an appetising TDS of 3,011mg/l with a racy-but-fine effervescence that’s exquisitely refreshing. If you like your water with real grip, the Velcro-like bubbles of Xino Nero, a citrussy “sour water” from Greece, are second to none.

The Rolls-Royce of natural mineral waters is considered by many to be Chateldon (1,882mg/l), which has been bottled in the Auvergne in central France since 1650. It was the favoured draught of Louis XIV, who had it brought to Versailles by mule. Just 700,000 bottles are released each year. It is cool and lush, with a delicate fizz that lines the inside of the mouth very luxuriously.

Sales of sparkling water are buoyant – a recent report by InsightAce Analytic valued the global market at almost $30bn, with sales expected to reach $67.6bn by 2030. But for reasons of economy and the environment, growing numbers of top restaurants including Noma and L’Enclume now prefer to serve tap water that’s filtered and carbonated in-house.

Tap water is cheaper and greener, for sure. And it will certainly quench your thirst. But I can see that if water was the only thing you were drinking in a fine-dining restaurant, this lack of options might leave you feeling a bit irked. It was frustration with this situation that prompted Dr Michael Mascha, a wine lover-turned-teetotaller, to establish finewaters.com – an online resource and academy that trains water sommeliers around the world. “When you ask a restaurant with hundreds of wines and the name of the farm where the duck is from on the menu, ‘What waters do you have?’ the uninspiring answer is, ‘Still or sparkling.’ It is time restaurants took water seriously,” he says. “The water menu should have suggestions and options for celebrating with water or enjoying a meal without alcohol.”

In a bid to lend water service more gravitas, he teamed up with Rogaška Glassworks, a historic glassworks in Rogaška Slatina, a spa town in eastern Slovenia, to create a stemmed tasting glass specifically for water. That design is now sold out, but a new pair, for still and sparkling, are now on the way, along with a handbook, Fine Waters, which will be published later this year. 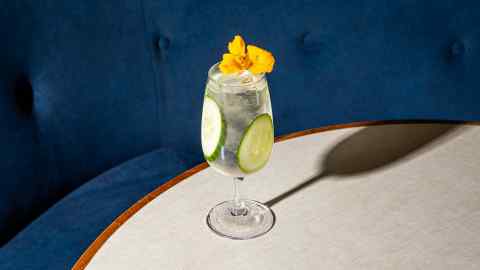 Water sommelier and “water influencer” Martin Riese has designed some of the longest water lists in the world including the 21-strong menu at Ray’s & Stark Bar in Los Angeles. But he says the promotion of water is about something rather simpler: “I want us to all value water more. It is a privilege to have clean and safe drinking water available; more than 770 million people don’t have that.”

A good reminder next time you have a glass of water to taste it like you’ve never tasted it before.