IMF chief says Brexit could cost UK up to 4.5% of growth

Britain’s vote to leave the EU is already casting a shadow over international growth, the International Monetary Fund chief said in an interview, adding that the imposition of new trade barriers in another large economy could have ruinous effects.

“I think it would be quite disastrous, actually. Well I don’t think I should say disastrous because that is an excessive word and I should refrain from excessive words. But it would certainly have a negative impact on global growth,” she told the Financial Times.

Any uncertainty surrounding a Trump presidency would probably yield more instability in financial markets, similar to the upheaval in the wake of last month’s UK referendum, she said in response to a question. But the IMF chief took care to avoid singling out any politician or referring to Mr Trump by name.

Ms Lagarde, who this week begins a second five-year term, warned of the risk of another great pause in the march of globalisation, akin to the disruption caused by the beginning of the first world war.

“I hope it is not a 1914 moment and I hope that we can be informed by history to actually address the negative impact of globalisation in order to leverage the benefits that it can deliver. Because it has historically delivered massive benefits and it can continue to do so,” she said.

Ms Lagarde said “waves of protectionism” in the past had “preceded many wars” and that protectionism “hurts growth, hurts inclusion and hurts people”.

Ms Lagarde said she did not want to get involved in the political debate in the US, the IMF’s biggest shareholder. But she made clear her dim view of the policies of Mr Trump, who has proposed punitive tariffs on goods from China and Mexico and ripping up US trade pacts such as the North American Free Trade Agreement.

The IMF has also backed the Obama administration’s push to get a vast new Pacific Rim deal, the 12-country Trans-Pacific Partnership, through the US Congress. Mr Trump has attacked the TPP as a “disaster” for the US economy.

“We have to work with all governments and all authorities but we certainly hope that whatever new government is in place in the US and whoever is elected as president will look at trade in positive terms,” Ms Lagarde said.

The IMF chief also called on the UK to move quickly to resolve the uncertainty caused by last month’s Brexit vote.

She had previously said she had hoped that IMF economists would be able to upgrade their 3.2 per cent forecast for global growth this year when they release an update later this month. But that now seemed unlikely, she said. 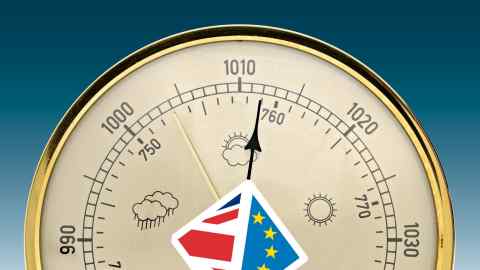 She added that the uncertainty set off by last month’s Brexit vote was already having a much broader impact on the global economy and on the IMF’s own forecasts for growth.

“We want to see clarity sooner rather than later because we think that a lack of clarity feeds uncertainty, which itself undermines investment appetites and decision making,” Ms Lagarde said.

The IMF’s assessment of the impact of the Brexit vote on the UK economy depends heavily on what sort of trade relationship with the EU a new government would be able to negotiate, she said.

Should a deal preserve access to the single market — such as Norway now enjoys — then the UK economy would be only 1.5 per cent smaller by 2019 than would be the case if Britain remained part of the EU. Were a deal to lead to the UK’s access to the EU’s 27 other economies being subject to tariffs under World Trade Organisation rules, it would cost the UK 4.5 per cent growth.

The IMF had not modelled the economic impact of a scenario in which the UK’s exit from the EU drags on and uncertainty continues for a year or more, Ms Lagarde said, but the political crisis set off by the vote could make such events likely.

“Do we have a forecast and scenario with prolonged uncertainty, total lack of clarity, no triggering of Article 50 [the official notification required to leave the EU], things staying in limbo for a long period of time? No. We don't have that. We doubt that it would be sustainable politically, geopolitically,” she said.

That uncertainty would feed through to the global economy and force some creative approaches at the Fund. For the July 19 update of the IMF’s World Economic Outlook, Ms Lagarde said the organisation was looking at presenting a variety of possible scenarios for the global economy depending on the outcome of Brexit discussions — a departure from its usual format.