France’s central banker calls for euro to challenge US dollar

Martin Arnold in Paris and Claire Jones in Frankfurt

We’ll send you a myFT Daily Digest email rounding up the latest Euro news every morning.

A leading contender to head the European Central Bank has called for more action to increase the use of the euro in international transactions and challenge the dominance of the US dollar.

François Villeroy de Galhau, governor of the Banque de France, told a Financial Times conference in Paris on Tuesday that greater global use of the European single currency would “help to protect our businesses against foreign exchange risks or legal disputes abroad”.

Calling the international use of the euro “a key component of our European financial sovereignty,” he said the dollar’s global role was “a clear advantage in the exercise of American power, while China cares about the internationalisation of the renminbi”.

Mr Villeroy de Galhau, who has run the French central bank since 2015, is one of the favourites to head the ECB when Mario Draghi leaves in October.

After the euro was introduced in 1999, it quickly became the world’s second most important currency. But Mr Villeroy de Galhau said that since the 2008 financial crisis and the 2012 eurozone crisis the international use of the euro had declined and “remains limited in comparison with the dollar”.

Last year, European Commission president Jean-Claude Juncker vowed to turn the euro into a global reserve currency and said it was an “aberration” that the EU paid for more than 80 per cent of its energy imports in US dollars, despite just 2 per cent of such imports coming from the US.

The ECB will publish its next annual report on the international use of the single currency on June 13. The ECB’s governing council, which includes Mr Villeroy de Galhau, has discussed the report in recent weeks.

While the ECB has in the past taken a neutral stance on the euro’s role as a global reserve currency, the central bank has shifted its position since Brussels favoured promoting its use as a rival to the US dollar. 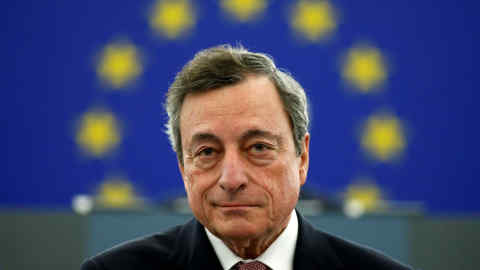 Mr Villeroy de Galhau said “one might expect the ECB to shift from its past neutrality towards a more positive tone on the international expansion of the euro”.

Benoît Cœuré, a member of the ECB’s executive board and a rival of Mr Villeroy de Galhau in the race to succeed Mr Draghi, said in February: “Provided the right economic policies are adopted, a stronger global role of the euro could help facilitate the transmission of monetary policy across euro area financial markets and reduce perilous fragmentation.”

The debate about the global role of the euro has been given added urgency by the collapse of the Iran nuclear deal and imposition of sanctions against Iran by US president Donald Trump.

Washington’s threat to block access to the US currency and payments system for companies in other countries doing business with Iran has underlined how the EU is powerless to defend its economic links with Tehran.

The ECB maintains that the internationalisation of the single currency must be market-driven and would require more work on a capital markets union that would create deeper, more liquid markets for euro-denominated assets.

The US dollar is by far the most influential global currency. More than 60 per cent of official reserves is held in dollars, while about 20 per cent is held in euro-denominated assets.

The lack of a true European alternative to the deep and liquid market for US Treasuries has led to calls by some central bankers, such as ECB chief economist Philip Lane, for the creation of a European safe asset that would pool sovereign bonds from all 19 eurozone member states.

Mr Villeroy de Galhau on Tuesday echoed this call. “The practical agenda to develop the international role of the euro strongly converges with the one to build a genuine capital markets union: with the development of fully unified European instant payment systems, integrated capital markets, and the possible creation of a safe euro-denominated asset,” he said.