Luxembourg: a country dedicated to food, wine and the good life

Grand duchy punches above its weight in blending old with new

With a population of little more than 110,000, Luxembourg’s capital is never going to be famous for the exuberance of its nightlife. Still, while it is no New York, Luxembourg City sleeps rather less than it did a couple of decades ago. This is thanks to the impact of a growing student population and the emergence of the Rives de Clausen area on the banks of the Alzette river as a hub for restaurants and bars.

Nothing is too far away in Luxembourg City, which is dotted with international hotels from most of the leading chains. The Hotel Le Royal is more central than most, although its location on one of the capital’s main arteries means it faces traffic most hours of the day. It must now also contend with the building work on the Royal Hamilius commercial, office and residential complex just down the road. Locals joke that the national bird is the crane.

Luxembourg’s foreign population has brought new styles and flavours to a country that has always taken time to enjoy the pleasures of the table. The grand duchy has more Michelin-starred restaurants per head than any other country. There are four such establishments in and around the capital including the two-starred Italian riverside establishment Mosconi.

The Alzette and Pétrusse rivers — and the spectacular gorges they have cut through the sandstone rock that makes up most of central Luxembourg — have given the city its character. The best way to get a feel for it is on foot, walking the narrow cobbled streets or strolling along the rivers that surround the centre on three sides.

It is worth taking a detour to climb the far side of the valley to the Grand Duke Jean Museum of Modern Art, designed by IM Pei to blend into the remains of Fort Thüngen. The fortress was mostly dismantled after the 1867 Treaty of London ordered the demilitarisation of Luxembourg. But there and elsewhere in the city are remnants of fortifications built by Louis XIV’s military architect Sébastien Le Prestre de Vauban in the 17th century.

Another relic of Luxembourg’s past as a military crossroads of northern Europe are the casemates, a web of tunnels under the city that were once used to store soldiers, horses, workshops and munitions.

The north of the country witnessed conflict and destruction more recently, notably Clervaux, the site of intense fighting towards the end of the second world war. Clervaux’s castle, destroyed by fire at the height of the Battle of the Bulge but now rebuilt, is an impressive event venue as well as home to the Family of Man, a collection of 503 photo­graphs from around the world compiled by Edward Steichen, one of Luxembourg’s most famous sons, which is part of Unesco’s Memory of the World Register, a heritage programme.

The northern and eastern regions of Luxembourg are bordered by the Our, Sûre and Moselle rivers that mark the border with Germany. These are full of delights for the hiker, from the castles that dot the landscape — some in ruins, some open to the public, a handful still private dwellings — to picturesque river valleys such as the Mullerthal and the striking rock formations that have led to the region being dubbed, rather unimaginatively, Little Switzerland.

Just beyond is Luxembourg’s oldest town, Echternach, which grew up around the abbey founded by English monk St Willibrord in 698. Today it is famous for a summer music festival and a traditional dancing procession that draws thousands of visitors every Whit Tuesday. The Sprangprozessioùn, as it is known in Luxembourgish, has been held since 1100 and is a reminder of the grand duchy’s rich history that is not easy to spot amid the modern towers of the capital’s business districts.

Not everything redolent of Luxembourg’s heritage is so high-minded. A must for locals and visitors alike in late August and early September is the Schueberfouer, inaugurated in the town as an agricultural market by John the Blind as Count of Luxembourg in 1340. It is now a rollicking funfair in a car park to the north of the city centre, open until 2am most nights.

Visitors will want to avoid booking a hotel in the Limpertsberg district in late summer.

A main attraction of the Schueberfouer is its more than 50 snack bars, restaurants and drinking halls. According to the World Health Organization, Luxembourg consumes almost twice as much alcohol as the global average, although the scales are tipped by shoppers from neighbouring countries attracted by its lower excise duties.

Though not a big wine producer, Luxembourg’s vineyards along the Moselle offer high-quality varieties that are generally less sweet than their German neighbours, as well as sparkling wines and in recent years some reds.

They are best appreciated in the winemakers’ cellars that dot the riverside between Grevenmacher and Schengen, where visitors can raise a glass to the border-free travel agreement signed in the village. 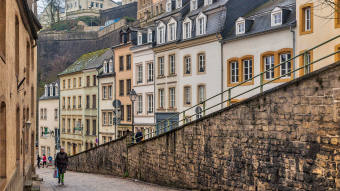