The search for spiritual enlightenment is hardly an unfamiliar concept for Silicon Valley pioneers. But few have taken the idea as far as Marc Benioff.

He abandoned a successful career at software giant Oracle to go on a soul-searching journey to India in 1996, which later inspired him to establish Salesforce as a company to channel his values.

Since then, he has gone further than most peers in putting some of these values into practice as an “activist CEO”: speaking out against discriminatory state legislation threatening LGBT rights; lobbying for a “big tech” tax in San Francisco to tackle homelessness; and buying the Time media company to support “a free and open press”.

At Salesforce, he has pushed for equal pay for minority and female staff, and pioneered a “1-1-1” model to donate 1 per cent of the company’s products, equity and staff time to philanthropic causes.

He has installed mindfulness rooms on every floor, provided baristas producing gourmet coffee, offered paid time off for staff volunteering, and appointed a chief ethical and humane use officer.

All of that is easier against a backdrop of growth, of course. As he describes it in Trailblazer, Salesforce was a pioneer in customer relationship management, offering even small organisations access to transformative technology, using cloud-based servers and software, liberating them from endless costly upgrades.

Benioff describes how he “flipped his organisation upside down and inside out”: allowing the development of software applications by non-employees; empowering external “Trailblazer” advocates inside his customers’ organisations; and creating Dreamforce, the sprawling festival-like extravaganza he hosts for staff and customers in San Francisco every year.

He explains potentially risky communication practices, including livestreaming executive off-site meetings to all staff; launching Chatter, an internal social network that became a vehicle for staff grievances; and sharing problems with customers.

More importantly, there is little discussion in the book about whether the values he embraces have driven Salesforce’s success or have been an indulgence its profits have permitted. There is, for example, scant data on recruitment or retention, figures that could provide significant evidence of the effectiveness of his approach. Nor is there much introspection. He claims in a few throwaway lines that his father’s honesty and his grandfather’s $20 handouts to homeless people were fundamental inspirations. There is little detail on the wisdom dispensed by his Indian, Japanese and Vietnamese spiritual counsellors, or how he interprets their advice.

To his credit, Benioff acknowledges the contributions of fellow executives and concedes personal errors. He describes, for example, his initial determination to buy Twitter despite others’ advice, and Salesforce’s periodic inertia in responding to clients’ changing needs.

However, the former registered Republican-turned-independent scarcely dwells on the development of his views of progressive social causes. They are presented briefly as faits accomplis without description of any internal turmoil or external resistance.

He describes his decision in 2018 to step back from daily corporate operations but does not explore the background to the highly contested decision to share his chief executive position with a colleague.

This book highlights some of Benioff’s more impressive progressive actions but only scratches the surface of the motives behind the values he practises.

Trailblazer: The Power of Business as the Greatest Platform for Change, by Marc Benioff, Simon & Schuster, RRP£20

Get alerts on Marc Benioff when a new story is published 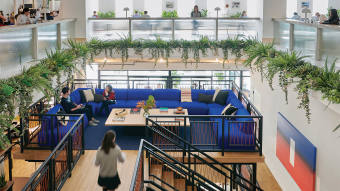