Saudi Arabia this week warned that it could lead Opec+ in cutting oil production, a message apparently aimed at skittish traders. But the kingdom also had another audience in mind: the Biden administration as it prepares to revive a nuclear deal with Iran.

Saudi energy minister Prince Abdulaziz bin Salman was careful not to mention the kingdom’s regional rival, focusing instead on “volatility” in a market where prices had slid by $25 a barrel since early June.

People familiar with the kingdom’s thinking say Riyadh’s sudden intervention, which has boosted oil prices back above $100 a barrel, was motivated in part by a desire to make clear to the US the consequences of allowing Iranian oil back into global markets.

President Joe Biden has pushed Saudi Arabia to raise oil production following Russia’s invasion of Ukraine, culminating in a trip to Jeddah in July that the kingdom hoped would help reset the relationship with Crown Prince Mohammed bin Salman following the murder of journalist Jamal Khashoggi four years ago.

But a little more than a month on, the potential revival of the Iran nuclear deal — and with it the return of Iranian oil to the market — have Saudi Arabia worried about further drops in the oil price and the implications for its security. The US said on Tuesday that “gaps remain” between Washington and Tehran over a nuclear draft agreement. Iran has received the US response to its proposals and is due to answer soon.

“Earlier this year I think it’s fair to say Saudi Arabia and other regional actors were reasonably confident the Iran deal wasn’t going to happen in the near future,” said Helima Croft, a former CIA analyst and Opec specialist at RBC Capital Markets.

“Now that the negotiations have been revived I think they will be focused on both the oil market and the wider security implications of this deal potentially getting over the finish line.”

Saudi Arabia has long opposed a US rapprochement with Iran and in 2017 threw its weight behind US president Donald Trump as he unwound the signature foreign policy achievement of the Obama administration.

Iran also wants to remind the White House of its sway over oil markets at a time when it feels its concerns about its own security have not been fully acknowledged, said analysts.

A new nuclear deal could restore as much as 1.3mn barrels a day of Iranian oil exports — equivalent to about 5 per cent of Opec’s total supply — easing traders’ fears of shortages as Europe tightens sanctions on Russian crude shipments. While it would take time for Iran to rejuvenate its oil sector and raise output, the country has a large volume of crude already stored on tankers at sea.

Some people familiar with Saudi strategy said the kingdom’s message was broader. Abdulaziz’s intervention “was about much more than Iran”, said Bob McNally, a former White House adviser and now head of Rapidan Energy Group. The minister “intended to interject stability into a crude futures market going haywire amidst falling liquidity and huge uncertainties including recession and the EU embargo on Russian oil.”

Russia, one of the countries involved in the Iran deal and Saudi Arabia’s Opec+ ally, was also an intended audience, said analysts. While Riyadh is keen to reaffirm its security alliance with the US, it is also trying to preserve an oil pact with Moscow that has bolstered oil revenues.

“The potential return of Iranian barrels is a destabilising element for the Saudi-Russian duopoly in Opec+, particularly if Iranian barrels hit the market at the onset of winter,” said Roger Diwan, a vice-president at IHS Markit.

“Declaring that the alliance will continue to manage markets, and potentially cut production is a signal that Saudi Arabia and Russia agree on the need to defend a floor price, and set these expectations early.”

However, the Saudi intervention could be awkward for the Biden administration, which has worked to drive down domestic petrol prices ahead of midterm elections this November. Prices have fallen steadily in recent weeks.

“From the Biden administration’s point of view it has to be an unwelcome signal from the Saudis at this time,” said Gary Ross, a veteran Opec watcher and former head of energy consultancy Pira.

“The Saudis are clearly signalling they want $100 a barrel to be the floor for the oil price, and so far Prince Abdulaziz has been successful in changing the psychology of the market.”

Traders certainly appear to be listening. Brent crude rose from $94 a barrel on Monday before Saudi Arabia’s warning to near $102 a barrel on Thursday.

Energy Aspects warned this week that the full return of Iran to the oil market may send crude prices below $80 or even $70 a barrel without Opec+ lowering production.

Prince Abdulaziz has argued that the oil industry needs more investment, a hint that he believes a higher price is necessary. A higher price also suits the kingdom’s budget as Prince Mohammed attempts to overhaul its economy. State oil company Saudi Aramco made record profits in the first half of the year. 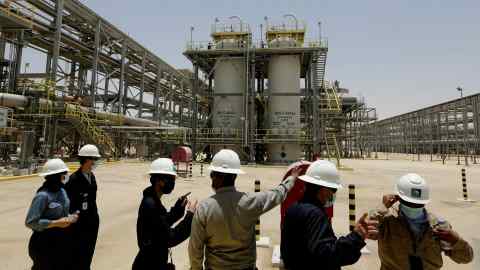 But people close to the prince say he is also concerned about meeting demand later this year when sanctions against Russia’s oil industry tighten. Saudi Arabia has repeatedly warned that it has limited spare production, having already raised output close to 11mn barrels a day with maximum capacity around 12mn b/d. Having seen the surge in European gas prices since Russia cut production, it is also wary of the consequences of an uncontrolled oil price spike that could accelerate a shift away from oil.

“Saudi Arabia does not want to lose control of prices,” said Amrita Sen at Energy Aspects. “Either to the downside or the upside.”