The size of Neil Woodford’s flagship investment fund has shrunk by £560m in less than four weeks as investors abandon the UK’s best-known portfolio manager following a sustained period of weak performance.

Assets in the Woodford equity income fund are down from £4.33bn in April to £3.77bn this week, a roughly two-thirds drop from its £10.2bn peak two years ago, according to Morningstar, the rating agency.

The accelerating decline has caused alarm among some senior investment industry executives as concerns grow about the outlook for one of the most recognisable names in UK fund management.

The fund is being examined by the Financial Conduct Authority, according to two people briefed on the process. The FCA declined to comment.

A Woodford spokesman said on Thursday the FCA had not been in “direct contact” with the investment manager. “The FCA monitors large funds where outflows have occurred and Link, the ACD [authorised corporate director], has been providing fund liquidity analysis reports on a monthly basis to the FCA for more than a year. This is standard procedure to ensure the fund is managing its liquidity appropriately.”

Investors have withdrawn £187m since the end of April, with more than half the outflows coming after Morningstar downgraded the fund from “bronze” to “neutral” last week. May represents the 23rd consecutive month when the fund has suffered redemptions, with an average of £10m flowing out of the fund every business day.

About £373m of the monthly decline is attributed to the weak trading performance of the fund’s underlying investment portfolio.

In an interview with the Financial Times in March, Mr Woodford admitted that he risked being “out of business in about two-and-a-half years” if he failed to stem investor withdrawals.

“This broader market malaise in UK-quoted domestic stocks contributed to the fund’s underperformance over the past month,” said the Woodford spokesman. “However, Neil continues to believe this area of the market, such as housebuilders and other consumer stocks, are profoundly undervalued and offer long-term potential returns.” 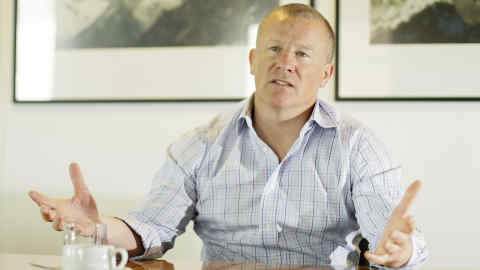 Investor redemptions are proving problematic for Mr Woodford as he struggles to keep his fund below a regulatory imposed limit of 10 per cent invested in unlisted stocks. These illiquid assets are harder to sell than listed equities, forcing Mr Woodford to devise more creative ways to rebalance his portfolio, including listing some stakes in companies on the Guernsey stock exchange.

The fund has also underperformed and is down 8.25 per cent this month, far larger than the 2.5 per cent fall in the FTSE All-Share index.

Mr Woodford is increasingly relying on a small number of large institutional investor backers. Last week St James’s Place, the wealth manager that provides more than a third of the assets that Mr Woodford manages across his £10bn investment empire, told the FT it was closely scrutinising the stockpicker’s performance.

Kent county council, another important client with about £250m invested with Woodford, said in March it was keeping his fund under review and would reconsider the relationship in a meeting on June 21.

One fund industry observer said Mr Woodford’s problems were yet to cause contagion. “I haven’t seen any evidence this is a wider industry issue, so it seems more likely to be limited to one particular fund that has had a number of problems recently.”