From manufacturing to fashion, pioneering female business leaders are opening up opportunities

Sevdil Yildirim was in talks with the owners of a Turkish furniture maker two years ago when they made a confession. They wanted to appoint her as chief executive but were worried that a female boss would not be taken seriously in the sector.

“I loved it because they were honest,” says Ms Yildirim, who had served on the company’s board. “Most people don’t say these things openly, they make excuses.”

Six months later, the owners of AGT Industry and Trade took the plunge and appointed her anyway. Under her leadership, AGT has more than doubled production capacity and greatly increased the number of export destinations.

Ms Yildirim is helping to blaze a trail in a country where female labour force participation is steadily rising, albeit from a low base. The rise includes sectors that often struggle to attract women, such as engineering and science.

The change is like the boiling of water. Until the boiling point you don’t see it. Then, suddenly, there is steam

But, as she points out, women remain under-represented, especially at the higher levels of business, politics and government. “It’s hard to say that we have equal chances to be the main decision makers.”

Turkey outperforms the European average in terms of its ratio of female to male scientists and engineers. But Ebru Ozdemir, chairwoman of Ankara-based infrastructure company Limak Investments, wants to see more women working in the field.

In 2015, Ms Ozdemir started a scheme to sponsor and mentor 100 young female engineering students a year from across Turkey. Her aim is to help them into male-dominated parts of the business, especially energy and cement, and on construction sites.

Ms Ozdemir is a civil engineering graduate, raised in a family of engineers. In 2010, she was appointed to head the board of the business, which her father co-founded in 1976. Limak companies employ around 60,000 people.

She has two children, now eight and 10 years old. Her son was born while she was working on-site on the construction of Istanbul’s Sabiha Gokcen airport, and she returned to work a week after his birth. “My mother was joking that . . . we should have called him Sabiha.”

Ms Ozdemir concedes she is lucky — as a senior executive she can afford “a lot of help”. For the young women on the mentoring scheme without such resources, her “biggest fear” is that they will drop out if they get married and have children. “We have to make the utmost effort for them not to leave,” she says. Plans involve reviews of the company’s gender pay gap and work-life balance.

Analysts blame a severe shortage of affordable childcare as one of the main reasons why Turkey consistently lags behind the OECD average rate of female participation in the workforce. At 34 per cent, it had the worst rate in the group of mostly wealthy nations in 2018. It also comes eighth from bottom in terms of the female share of seats on boards of the biggest publicly listed companies, according to the OECD, although it performs better than many emerging market peers.

Yet Gunes Asik, an assistant professor of economics at Ankara’s TOBB University of Economics and Technology, says she is “positive” about the underlying trend. Turkey’s headline statistics are distorted by underemployment among older women, she says. “Younger generations have more skills, they are more open to [the idea of] work.”

President Recep Tayyip Erdogan, who came to power in 2002, regularly provokes criticism by women’s rights organisations for his frequent appeals to women to have at least three children and for describing those who are not mothers as “incomplete”.

Yet the president has enabled greater female employment by overseeing a big expansion in university places. He also lifted a ban on wearing the headscarf at university, which had acted as a barrier to women from conservative families.

Attitudes among men, especially from more traditional backgrounds, will be crucial to further change.

That is why Nur Ger, the 63-year-old founder of Istanbul-based fashion producer Suteks Group, decided two years ago to set up Yanindayiz (“we are at your side”). It aims to bring men into the conversation on women’s rights. She says the primary obstacle to greater equality in Turkey is a “patriarchal mindset” that harms not just women but also men.

Ms Ger, who started Suteks in 1986, has recruited a string of high-profile male business leaders, journalists, lawyers and other professionals to talk about equality and women’s rights with their peers. They give “barbershop” talks to young people about patriarchy and violence against women, and campaign for regulatory and social change.

While she laments the scale of the challenge, she also believes that attitudes are rapidly changing.

She was stunned on a recent visit to an outdoor café in a conservative district of Istanbul, when one “macho-looking” man was giving his baby a bottle while a male friend played with his young daughter. The mothers were nowhere to be seen.

“You couldn’t see that 20 years ago — not even 10 years ago,” Ms Ger says. “The change is like the boiling of water. Until the boiling point you don’t see it. Then, suddenly, there is steam.” 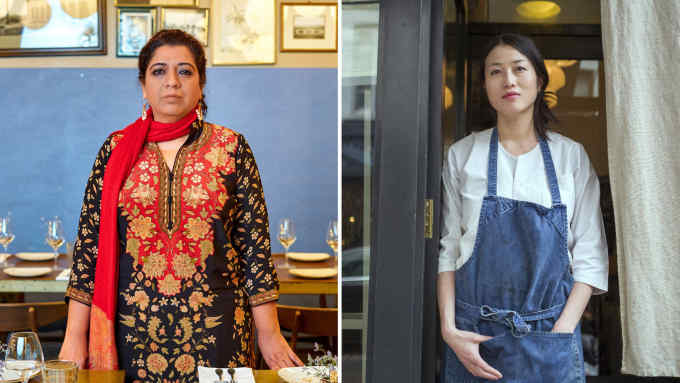