We use cookies (opens in new window) for a number of reasons, such as keeping FT Sites reliable and secure, personalising content and ads, providing social media features and to analyse how our Sites are used.
Manage cookies
Accept & continue
Opinion Inside Business

Apple’s rivals often look backwards in their attempts to take on the empire that has been built around the iPhone. With Apple laying the groundwork for another leap forward, they are showing signs of learning some of the lessons from their past mistakes. But they still seem no closer to finding the formula that will stop its headlong advance deeper into the digital lives of more than 1bn people.

The latest evidence that the anti-Apple camp is stirring came with news this week of a new partnership between Microsoft and Samsung. For anyone with a Windows computer and a Samsung smartphone, it should get easier to do things like respond to messages or manage notifications from either device — the kind of thing Apple already makes possible between the iPhone and Mac.

Google is also trying to reach a new compact with the South Korean handset maker, to put its smart virtual assistant and other services front and centre on Samsung’s phones, in place of Samsung’s rival products. This is only the latest in a long series of attempts to work out a more stable strategic partnership between the two, and there is no guarantee it will produce a lasting detente.

There is no secret why companies like these seem to be in a constant state of strategic turmoil when it comes to the dominant personal computing platform of the age. The iPhone — and the growing constellation of devices and services of which it is the gravitational centre — has been a fearsome competitor.

One is the first-party services that are now a central pillar of Apple’s future growth. Like it or not, over time this will squeeze out many companies that have counted on using the iPhone to reach their own customers. 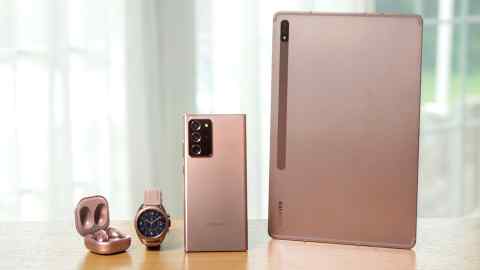 The other is a level of device integration that others struggle to match. Increasingly, Apple’s various screens provide a view into a single digital world: moving the Mac on to ARM processors is just one step in this convergence.

The integration is also happening between the gadgets that cluster around the iPhone, and are becoming significant profit centres in their own right. Even after nine years, AirDrop is still unmatched in the ease with which it wirelessly connects Apple’s devices. Taking that further, Apple has been creating connections between things like its AirPods and Watch to produce small but notable experiences that are — to use the word beloved by Steve Jobs — magical.

To address this, Apple’s rivals need to first accept the strategies that have not worked. Google’s move into making smartphones has been about as successful as Microsoft’s was — in other words, not at all.

Samsung, meanwhile, has failed in its efforts to free itself from dependence on Google’s software, including with its virtual assistant, Bixby (built partly by the same crew that did the pioneering work for Apple’s original Siri.)

For these companies, sticking to what they are good at and forging closer alliances would be a step forward. But this would still not guarantee the same deep technical integration achieved by Apple, and in many ways the moves seem merely defensive.

It might feel natural to encounter Google’s Assistant on Samsung’s Galaxy phones — provided the software is given deep access to the device. But do users want their Android apps to be more closely linked to their Windows PCs (something Microsoft also announced this week)?

None of this is to say that Apple does not have vulnerabilities. In hardware, it has often risked looking slow: there is no room for error now with its leap into 5G. Some of its services have been abominations. Its customers had to put up with a woeful iTunes for years, and the first Apple Maps barely counted as adequate. Above all, the largely closed world of Apple products and services means that its users will never be offered a full choice of all the services available elsewhere.

Apple’s rivals, by reaching for tighter technical — and business — links, may once again be doing the wrong thing. By trying to emulate Apple’s integration, without at the same time having the unitary control that Apple has over its technology universe, they may come up with a pale shadow of the experiences its technology makes possible. But as Apple inches closer to becoming the world’s first $2tn company, it’s not obvious what else they can try.