Berliners celebrated the reopening of their shops last week after a five-week shutdown that turned one of Europe’s liveliest capital cities into a ghost town. But what should have been a celebration felt more like a wake.

In Mitte, one of the German capital’s trendiest neighbourhoods, where thrift shops jostle for space with tech start-ups and glitzy boutiques, the streets were eerily empty. Most stores were still shut, and those that were open were largely devoid of customers.

Of all the big European countries hit by coronavirus, Germany was the first to reopen its shops. For that reason it is being seen as a test case. The big question is how has the pandemic altered Germans’ consumer behaviour.

Video: Coronavirus: how Germany is containing the epidemic

Some, such as Nils Busch-Petersen, head of the Berlin-Brandenburg Trade Association, fear it has done long-term economic damage. “We are entering a long, lean period which could end up being even worse than the shutdown,” he said. “At least when shops were shut they were entitled to government aid. Now they’re on their own.”

Leading economists agree. “Consumers will be very cautious — they’ve seen a big loss of income, and they will want to save,” said Clemens Fuest, head of the Ifo Institute in Munich, a think-tank. “Shops will try to attract customers with discounts and special offers, but they’ll struggle to reach the sales volume they had before the crisis began.”

For cosmopolitan cities such as Berlin, the sudden halt to international travel is also having a big impact. “Normally this street is full of tourists — they’re the reason why Mitte is so lively,” said Ms Frohnhoefer.

Mr Busch-Petersen said tourists, both international and domestic, normally accounted for 20 per cent to 25 per cent of retail sales in Berlin.

Even those less reliant on tourists are struggling to bounce back. Tatjana Steinbrenner, manager of Kaufhaus Ernst Ganz, a department store in the west German town of Bensheim, said takings in the first week since she reopened had been meagre. “Sales are at a third to 40 per cent of what they were before the shutdown.”

Many customers were suffering from “existential fear”, she said. “They’re on furlough or even unemployed, so money is short.” And, in any case, no one is in the mood for “emotional purchases”, added Ms Steinbrenner. “There’s little point in buying new clothes if you’ve got nowhere to go to show them off.”

Though shops have reopened their doors, restaurants, cafés and bars remain closed. “The whole shopping experience has changed because you can’t buy stuff and go for a bite to eat afterwards,” said Mr Fuest. “That means people don’t go shopping just for the joy of it.”

Despite that, some cities appear to be springing back to life more quickly than others. According to data analysis carried out by the Kiel Institute for the World Economy, foot traffic in the south-western city of Mannheim is now 56 per cent of normal levels, compared with 28 per cent during the shutdown. However, in Munich, the capital of Bavaria — which had much higher Covid-19 infection rates than other regions — it is just 13 per cent. 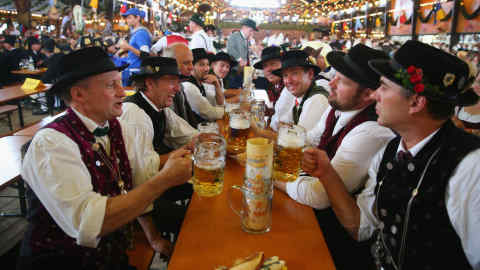 And across Germany, many larger shops remain shut. Only those with a retail space of 800 sq m or less can reopen — and most department stores do not qualify. Business at Ms Steinbrenner’s store is confined to a small, cordoned-off section of the ground floor.

Another business that has had to restrict its retail space is MediaMarktSaturn, which runs a national chain of electrical goods shops. Nevertheless, there was strong demand last week for its home office supplies, smartphones and entertainment products. Because of the 800 sq m rule it can only let 40 people into its shops at a time. But customers are taking it in their stride.

“They stay very positive and are behaving in an exemplary fashion, even if they occasionally have to wait a while to enter,” a spokeswoman said.

But some health experts say that even such a cautious return to normality is a step too far. Christian Drosten, head of the Virology Institute of Berlin’s Charité hospital, said Germany led the world in terms of its success in containing the coronavirus pandemic. “But I regret that we may be about to completely gamble away our lead,” he said in a podcast. Shopping malls were reopening and were once again full of people. “And you really have to ask yourself whether that’s sensible,” he said.

Angela Merkel expressed similar fears last week, saying she feared some regions were relaxing the shutdown measures too quickly. Germany, she told the Bundestag, was only at the beginning of the pandemic, yet encouraging statistics on the spread of the virus risked “lulling us into a false sense of security”. “I’m convinced . . . we need to show maximum endurance and discipline,” she said.

Meanwhile, retailers across Germany are experiencing relief mixed with a large dose of apprehension. Ms Steinbrenner assumes that sales will remain depressed into May and June, but bounce back in the summer. If they do not, “things are going to be very tight for us”, she said.

Mr Busch-Petersen said such fears are shared by retailers across Germany. Businesses, he said, had embarked on a “long march across the equivalent of the Tibetan Plateau”. “The air is going to be thin for a long time.”