From Liverpool to London, patients are receiving treatment in a way unimaginable when the National Health Service was founded just over 70 years ago. From virtual clinics to wearable devices, technology has already transformed the way millions of Britons consult and communicate with their doctors.

But a new plan from the NHS has radically ramped up the health system’s digital ambitions as it grapples with a shortage of doctors, squeezed resources and rising demand from an ageing population.

In four new commitments presented in a long-term plan this month, the NHS promised to take new technologies “mainstream” by offering all Britons “digital” consultations that include video and telephone appointments.

The other three commitments include plans to trial devices such as “smart inhalers” to monitor patients remotely, the “potential” use of artificial intelligence to interpret CT and MRI scans, and a project to offer children with cancer the chance to sequence their genomes.

“We’re very keen to support this,” said Luke Buhl-Nielsen, UK head of Swedish doctor app Kry. “There are certainly a number of conversations last week that have started or accelerated because of the plan.”

The European technology sector has historically led the way in digital health innovation, producing a wider range of start-ups than the US.

But so far the businesses have struggled to gain traction in the UK, with start-ups complaining that the NHS is difficult to do business with because decisions are taken by a labyrinthine network of cost-conscious NHS trusts, clinical commissioning groups and general practices. There is also a perception that the health service is reluctant to look externally for solutions.

But Simon Eccles, chief clinical information officer for health and care, and James Hawkins, director of strategy at NHS Digital, made clear in recent interviews that they were committed to buying services from start-ups and smaller businesses.

“There is no sense in using NHS tech talent to build new systems where other sectors have already solved similar problems, or where commodity services are already being supplied effectively,” Mr Hawkins said.

In an attempt to break into the system, several start-ups have snapped up key decision makers from the NHS and government.

Juliet Bauer, who worked on the digital components of the NHS plan, including the push to increase online consultations, ignited controversy earlier this month about the “revolving door” between the public and private sectors after announcing she would be taking up a job at Kry.

Two years ago, Babylon, a London-based rival to Kry that counts health secretary Matt Hancock among its customers, hired Paul Bate, a former senior official at the Care Quality Commission and a policy adviser to former prime minister David Cameron and deputy prime minister Nick Clegg. Mr Hancock, who was promoted to a ministerial role under the coalition government, has been criticised for promoting Babylon. 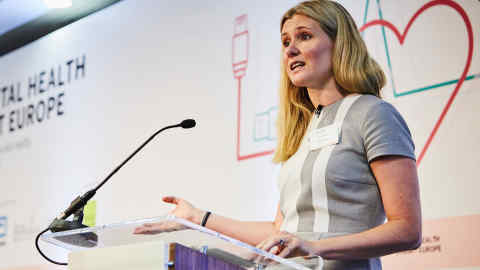 Dr Eccles said that to help smaller start-ups win contracts, the NHS would simplify procurement rules, for example by changing requirements that companies prove their turnover and that they have cash in the bank.

He added that the service had learnt a lesson after the failure of a plan to develop an electronic patient record, available throughout the NHS, once described as “the biggest civilian computer project in the world”.

After a catalogue of delays and difficulties, the programme was in effect abandoned by 2011, despite spending estimated to total about £11.4bn.

“It is absolutely vital that we keep in mind right now the lessons of [that programme],” Dr Eccles said. “If we simply try and do it again . . . that would be effectively to have wasted money twice. It would be unforgivable.”

At the same time, investors have cautioned that digital health businesses are bedevilled by the risk of replacement.

Suranga Chandratillake, general partner at London-based Balderton Capital, said “telemedicine” businesses such as Babylon and Kry are easy to replicate and “hamstrung” by cost concerns because they can be replaced by simpler videoconferencing software such as Skype.

Softbank’s Vision Fund held discussions about investing in telemedicine businesses, but decided against it, according to people familiar with the matter.

“We think it’s a very difficult business to make a long-term successful investment in because it’s all taxpayer funded,” Mr Chandratillake said. “It doesn’t have a particularly technical barrier to entry.”

Costly innovation at a time of squeezed resources

NHS trusts and GP practices have also begun experimenting with other new technologies such as remote monitoring of patients through smartphones and wearable devices. Google’s DeepMind, for example, has developed an app called Streams to monitor patients with acute kidney injury and alert nurses when their vital signs seem abnormal.

Inhealthcare, which is based in North Yorkshire, England, struck an agreement this month with a group of clinical commissioning groups in north-west London to supply software that enables patients to upload data from Fitbits or apps that collect information such as blood pressure and glucose levels.

“If this plan means that the NHS is about to collaborate with tech companies in the same way as the City of London does, it’ll be massive for UK plc.”

But the health service’s digital ambitions nevertheless come amid a squeeze on capital funding. The National Audit Office, an independent spending watchdog, on Friday warned that NHS capital budgets had been repeatedly raided to support revenue spending.

Chris Holmes, programme director for health at the Alan Turing Institute, a research body, said the health service will need to develop rules to govern the use of new technologies.

“If they are successful in hitting this plan, they will need a documented set of guidelines around transparency, reproducibility,” he said. “The question is what do we do when something goes wrong: what is the auditing process, what is the learning process?”

The cost of sequencing a human genome has fallen dramatically in the past decade, from $2.7bn for the first human genome to about $1,000. This has prompted governments around the world to launch projects to sequence human genomes in the hope of better understanding complex and rare diseases.

The UK runs one of the most ambitious genetic sequencing projects, the 100,000 Genomes Project, but as part of its new plan the National Health Service has said it will now offer children with cancer the chance to sequence their genomes. The aim, according to the plan, is “to enable more comprehensive and precise diagnosis, and access to more personalised treatments”.

Vishal Gulati, a partner at venture capital firm Draper Esprit who has invested in several genetics-related start-ups, said the announcement signals an intention to bring genomics into mainstream healthcare. “So far what we’ve seen is that genomics kind of lies outside the healthcare system,” he said. “We are now seeing a sort of merger of the two”.

“We are going to get in touch with the NHS,” Mr Camblong said. “Artificial intelligence is definitely a must to find the mutations, since most of them are unknown unless you are very sophisticated in pattern recognition.”