Collector Naomi Milgrom on her hands-on approach to philanthrophy

Naomi Milgrom, in Milan for the Salone, the city’s vast annual furniture festival, sips coffee on the terrace of the Four Seasons, perfectly turned out in Dries Van Noten. “I don’t think I’ve ever separated architecture or design or art,” she says. “I believe in creative collectivity.” Milgrom’s contributions to the arts cover everything from fine art to fashion, and she likes to do her own research.

The eighth richest woman in Australia tells me that she sees herself as more part-of-the-process than mere patron. “I’m working with Rafael Bonachela on a new contemporary dance piece at Sydney Dance Company in October,” she says, though I’m guessing her contribution doesn’t include a new choreographic flourish.

Since 2014, Milgrom has made her mark on her home city of Melbourne with a series of temporary architectural pavilions in Queen Victoria Gardens each October. The MPavilions are modelled on the London Serpentine’s blueprint of inviting foreign architects with a distinct design vocabulary to the city; in Melbourne they have included Mumbai’s Bijoy Jain in 2016 and the Dutch superstar Rem Koolhaas in 2017. Each pavilion is intended to broaden architectural awareness and debate — “We don’t need any more buildings in Melbourne, we need to work out what to do with what we’ve got,” says Milgrom, echoing contemporary urbanist thinking — and attracts more than 200,000 visitors in its four-month duration.

This summer, she is supporting the premiere of a William Kentridge multimedia performance called “The Head & the Load” in Tate Modern’s Turbine Hall in July. She started collecting the South African artist’s work in 2003, dazzled by his ability to delve into Africa’s troubled past and present with such scenographic skill. She has also lent a number of works by Kentridge from her significant collection to a major monographic exhibition at the Art Gallery of New South Wales that opens in September.

Milgrom is generous, thoughtful — and frequently specific in her demands. When approached by the Art Gallery of NSW, she said, “I’d be delighted to lend you work from my collection, but I would like William [Kentridge] to curate the exhibition.” For the MPavilion, she requested that the city donate $1.4m to the project over four years, on the understanding that she would subsequently bequeath the shelters to the city in perpetuity (Jain’s bamboo and wood structure, for example, has gone to the zoo). Before she brought an exhibition of the radical fashion designer Walter Van Beirendonck from Antwerp to the RMIT University in Melbourne, she managed to have him inserted into the fashion students’ syllabus, to ensure a suitably enthusiastic and knowledgeable response.

If her detractors think she has an inappropriate level of control over the local cultural landscape, the architect Amanda Levete, who worked closely with Milgrom when she designed the MPavilion in 2015, believes that she truly wants to make a difference. “The project goes beyond mere structure. It hosts a four-month programme of public events and has created a genuine forum for discussion in Melbourne that goes beyond the built form. She does practise what she preaches,” says Levete.

I don’t think I’ve ever separated architecture or design or art. I believe in creative collectivity

Milgrom’s daily business is as hands-on owner of the fashion company Sussan, which includes the women’s labels Sportsgirl, Sussan and Suzanne Grae and makes a profit of around $36m a year. She describes the brands as “idiosyncratic to the Australian way of life”, which might explain her success in standing up to the relentless march of Zara, Topshop et al.

Having worked in what was the family business since 1990, she acquired the whole package from the rest of her siblings in 2003. She now has three female CEOs and employs around 4,000 staff, 180 of whom work in the old Rosella tomato sauce factory on Melbourne’s river Yarra, which was handsomely converted into her HQ in 2008 by Sydney architects Durbach Block. “I wanted to create a paradigm shift in my workforce,” says Milgrom. “I wanted to make a workplace where I could thank people, with a lot of light and art and a garden.”

Employees are greeted in the reception by a multicoloured Sol LeWitt wall painting, and 70 other works from Milgrom’s collection — Seydou Keïta, Andreas Gursky, Tracey Moffatt, Gillian Wearing, Janet Cardiff and George Bures Miller — ease them through their day.

A central courtyard is planted with silver birch and a living wall. Milgrom likens the rippling quality of the wall to the textiles that are at the heart of her business and the birches to its seasonality. Richard Long decorated a corridor with a site-specific mural made of Yarra River mud; and the photographer Thomas Demand curated the boardroom.

For Milgrom, the job of a department store and a museum is not dissimilar. “What we do in retail every day is to attract audiences,” she says. “I felt the same when I was on the board at the Australian Centre for Contemporary Art [from 2004 to 2011], where our most important conversations were about accessibility. The words ‘contemporary art’ don’t necessarily bring people running here. They make people feel nervous and disconnected.”

She has made sure that the pavilions lure visitors with yoga and really good coffee (“After all, this is Melbourne!”). She says that Koolhaas’s pavilion, with its amphitheatre-style design, was the most fit for purpose: “It had a beautiful sense of containment, and seating that rotated so you could be inside or out.” This year’s structure, by Spanish architect Carme Pinós, promises to be a simple boxed steel roof balanced on gridded steel columns. (Pinós’s work tends to be community-focused and functional.)

Milgrom and Pinós met for the first time in London last summer over a sandwich lunch. “I had no idea that Balenciaga was her favourite designer as well as mine,” she says, delighted. After lunch, the pair went off to a show at the Victoria and Albert Museum celebrating Balenciaga’s work, where Pinós, a former pattern cutter, talked Milgrom through the sophistication of Balenciaga’s sectional design. “It’s as I said,” says Milgrom, “you can’t separate business, design or art, even if you try.” 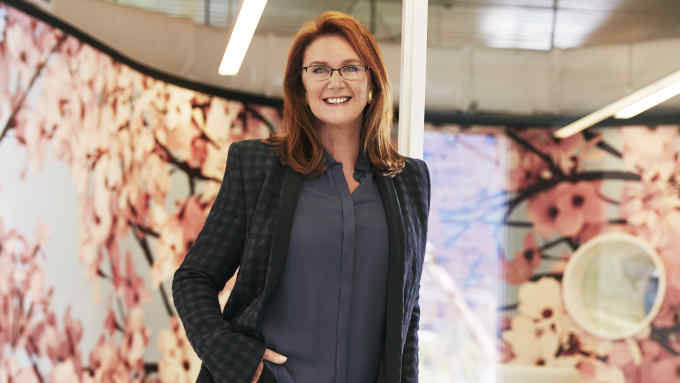