With his own television show and a business partner who is a former mayor of Chicago, Sean Conlon is no ordinary property financier. The 50-year-old, fast-talking entrepreneur runs Conlon & Co, a boutique investment firm that he describes as a “buccaneering real estate merchant bank”, in partnership with minority shareholders, former city mayor Richard Daley and his son Patrick.

Together they advise clients, including celebrities such as the actor John Cusack and wealthy Asian and European families, on US and European property investments.

Conlon is often recognised in public, thanks to his CNBC TV show, The Deed: Chicago. A woman from the city and her British husband interrupt our interview as we chat at a London hotel, asking if he is “the guy from that US property show”.

In his show, he helps investors solve problems with properties they are flipping, sometimes saving them from financial ruin. Two of his key pieces of advice are “always have a plan B” and “hold investments for at least five years” — not that the latter would appeal to flippers.

“I’ve made all the mistakes, many more than once on houses and developments. But I enjoy teaching people,” he says. Dapper, understated, gregarious and generous with his time, Conlon seems to relish reeling off anecdotes in his Chicago-Irish mix of an accent.

Last year, US property sales platform Compass, which is valued at $6.4bn, paid an undisclosed sum for Conlon’s nine-year-old high-end estate agency Conlon Christie’s, with annual sales of $750m and 200 agents, who were absorbed into the enlarged group.

Conlon is now raising more than $1bn for two Chicago-based investment companies. One is developer CA Ventures, which aims to break into the market for student accommodation in Europe. A huge undersupply and a lack of sophisticated operators makes Italy particularly attractive, he says. The second, Sterling Bay, which built Chicago’s Lincoln Yards riverside quarter and Google’s office in Fulton Market, will continue investing in the city. 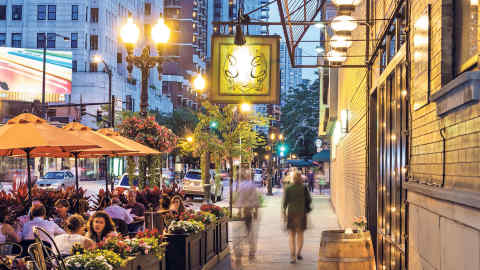 Conlon describes himself as Irish, though he was born in Birmingham, England, to Irish emigrant parents. His father was a bus driver, then a failed entrepreneur. His mother worked as a teacher, and now runs a nursery school in County Kildare in Ireland at the age of 75.

Conlon arrived in Chicago in 1990, taking a job as a janitor’s assistant — something of a demotion from the credit analyst role he had been fired from at Lehman Brothers, the US investment bank, in London.

Night classes and studying the Midwest city’s zoning rules helped him find his niche as a broker there. He earned a $1m bonus in 1997, working 18-hour days selling about 50 per cent of all new properties on the city’s northside.

Eleven years later, by the time of the 2008 crash, he had moved into financing property. He had provided $100m in mezzanine financing for $1.2bn of development across the US.

“I’d been complacent. It took me five months to find my feet. I was losing millions a week at one stage. I’d go into the office scared, sick to my stomach, having to face my 300 agents,” he recalls. At one stage, he had to sell his car to pay their wages.

Stubborn self-belief and a bunker mentality got him through the following two years, which stick in his memory. “I told myself, if I could survive another day, something might change,” he says. Gradually the money trickled back in. Some $250,000, then $1m, until $50m was repaid. A small team then helped him and his partner recover the rest.

You can fix a bad deal with good people, but not a good deal with bad people. It always comes down to the people involved

An accomplished networker — hedge fund manager and famed short-seller Jim Chanos attended his 50th birthday party — Conlon notes that property deals are increasingly migrating online, while his is a more personal style. “We’re approaching the point where most commercial property — as well as residential deals — will be done online. I am amazed people are thinking they will do $100m deals,” he reflects. “I still need to get out and see properties and people. But I guess for millennials and thirtysomethings, who have grown up with so much online, it is more acceptable.”

Conlon frequently receives property tech and fintech investment pitches. “I’ve backed some of them, because I can see where they fit,” he says, declining to elaborate. He remains sceptical, however, asking how well artificial intelligence might predict how people behave in a downturn. “You can fix a bad deal with good people, but not a good deal with bad people. It always comes down to the people involved,” he adds.

Looking at the US property market, he says with low interest rates and more money available than there are deals, the small number of developers that are distressed have overpaid, incorrectly structured debt, or miscalculated construction, sale or leasing costs. His clients include investors interested in such distress opportunities.

He sees opportunities in investing in build-to-rent housing and warehousing. Flooding risks mean warehouse operators may relocate inland, he suggests, as some investors think more about climate change.

Conlon’s wealthy Asian investor clients tend to seek steady 8-10 per cent returns, ideally on European or US blue-chip type properties. Some types of build-to-rent, including retirement homes in Europe, can produce returns of up to 18 per cent, he says. Though reluctant to make predictions about the US market, he has personally been selling assets but using the capital to invest in Conlon & Co.

One market trend he has been surprised by concerns wealthy global citizens. “Chicago has beautiful lakeside four-storey greystone houses selling for $5m but declining in value. They would prefer to pay $15m for a service and amenity-rich apartment with none of the houses’ maintenance issues,” he says.

Gentrification has changed neighbourhoods during his 29 years in the city, where new developments must include 20 per cent social housing. 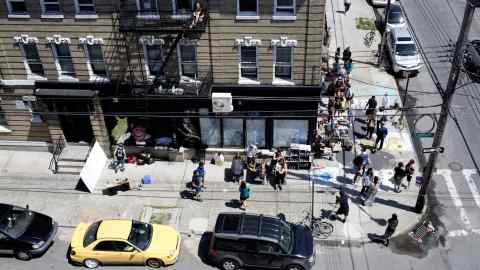 Conlon takes a pragmatic approach to that rule. “I would be lying to you if I said it doesn’t displace people. But it helps more than it hurts, and we may bring some benefit to communities,” he says. “The alternative is lose-lose: ghettos will stay ghettos. Sometimes compromises are possible. Developers might put the social housing on an adjacent site. The issue seems to be getting more difficult to solve.”

At the opposite end of the market, he has been surprised by “a new version of the country club”, such as the 15,000-acre Yellowstone Club in Montana, whose members include Bill and Melinda Gates.

“Plots of land and homes might each cost $10m, while two miles outside the gate of these ‘disneylands’ for the super-rich, you might get 1,000 acres for the same price,” he says. “Clearly, it is about the need to belong, in a community of your peers. It is an indication that buyers aren’t thinking about price as rationally.”

As for his own property interests, Conlon, a keen angler, hopes to buy back a watermill he previously owned in Kildare. In years to come, a small wildlife foundation he and one of his sisters established in 2007 will take up more of his time. “I am obsessed with animals and, ultimately, I will spend all my money running that,” he says.

Until then, property dealmaking looks likely to remain his focus for a while yet. But his television days may be over. “I probably won’t do another season of TV, but my own show was a pretty cool thing to tick off the bucket list,” he says.