US tests strategies to interest girls in computer science

As the technology sector works to solve its diversity problem it must grapple with a puzzle: why fewer women studying computer science?

Today, less than 20 per cent of computer science graduates in the US are female, compared with more than a third in the mid-1980s.

“You don’t see the same gender disparity in other in other sciences as you do in computer science,” says Reshma Saujani, founder of Girls Who Code, a non-profit organisation that runs after-school clubs across the US for girls up to 12th grade (age 18). “There’s much more gender parity in biology or [maths] than in computer science.”

To address this, researchers and educators are testing new strategies and curriculum tweaks to make computer science more appealing to women.

Linda Sax, a professor of education at the University of California, Los Angeles, is leading a research team that received a $2m grant from the US National Science Foundation to study diversity in computer science education at university level. A key question, she says, is how to make introductory computer science accessible, because new students come from a wide variety of backgrounds.

“We know that women come in [to college] with much less preparation in computer science specifically,” she says. This could be addressed by offering different sections of an introductory course based on students’ prior experience, she says, or by using inclusive teaching practices, such as working in pairs, to help students build a sense of belonging.

Curriculum design could also make a difference. “If you teach computing that is just focused on programming, you will attract some students, but to generate a diverse group — [with men from more diverse backgrounds] as well — it is important to emphasise how computing makes a difference in society,” says Prof Sax.

Other organisations are addressing diversity in computer science education before students even get to college. Code.org is a non-profit body that runs the largest computer science teacher-training programme in the US for K-12 schools (kindergarten to high school).

Diversity informs all aspects of the programme, including teachers being trained to recruit a diverse range of students — for example, if only one girl signs up for a class, the teacher might encourage her to invite a few friends.

The curriculum is also designed to be accessible to students from diverse backgrounds. Rather than starting with coding, the programme’s middle school and high school classes begin with logic and data, which helps create more of a level playing field in the classroom.

“If you start with coding, those who already know it accelerate super fast, and those with no background feel they are not good enough,” explains Hadi Partovi, Code.org founder and chief executive.

“That’s a really simple thing, but it makes a meaningful difference in attitudes. The curriculum is designed with equity and diversity in mind.”

The attention to diversity even extends to classroom decor. Code.org gives teachers posters to put up that show people from all walks of life, says Mr Partovi. “Just to make it less about the robots and more about humanity.”

That makes a big difference when students get to college, where women are 10 times more likely to major in computer science if they have done an advanced placement course at high school, according to a Code.org analysis of data from the College Board.

When it comes to changing the culture in Silicon Valley, though, educators are well aware that drawing more women into computer science is just the first step.

It is a chicken-and-egg problem: a lack of diversity in the tech industry discourages women from studying computer science, which in turn makes it harder to recruit engineers from more diverse backgrounds.

“Obviously the education pipeline isn’t the only problem with diversity in tech,” Mr Partovi says. “But it’s a core piece, and it’s for sure changing.” 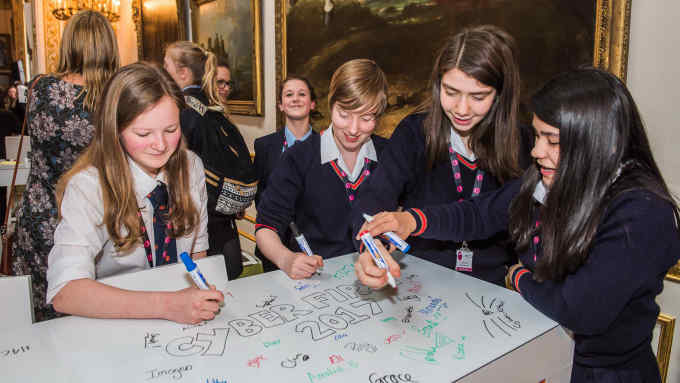