Borough Market Kitchen, the umbrella caravanserai for new restaurants at the market is different from most of London’s seemingly endless new “Food Halls”. Partly because Borough is a weird entity, a sort of medieval social enterprise that, for reasons genuinely lost in time, doesn’t have quick profit as its main motive.

But, more important, because, right now, it’s providing a berth for Elizabeth Haigh, who, in the opinion of those who follow such things, could be London’s most promising young chef.

You can’t book a table at Mei Mei. This is because it doesn’t have tables — or chairs. There are roosting perches that are there to help you empathise with the main ingredient of lunch rather than actually park your human arse.

It might have been uncomfortable if I’d put my full weight on it but the experience is mainly one of leaning forward into the food . . . face into the bowl.

Kaya toast should probably be some sort of snack with coffee (sometime, I’ll tell you about the butter coffee; until then, just order it on spec) but with sufficient greed and inquisitiveness can be converted effortlessly into a side dish.

Slices of grilled white bread, spread with a sort of coconut marmalade where there should be butter . . . and sandwiched either side — where one might expect bread — by large slices of butter. Are you following this? Is your cardiologist? It is flat-out, howl-at-the-moon filthy good.

When you see carrot cake on a menu, I think you have a right to expect a vaguely healthy bit of hippy confectionery, but here you’d be way off the mark.

In Singapore, a “white carrot” is a daikon or mooli — giant radishes that, here at Mei Mei, for the purposes of further messing up my brain, are pounded to a paste, set into blocks, flavoured with stuff, including — but not restricted to — pandan, and stir-fried with something halfway between hard scrambled eggs and a disintegrating omelette.

If you think that doesn’t sound like anything you’ve seen before, let me assure you that it’s not like anything you have tasted before either. I mean, it’s just a little side dish . . . and I’d cheerfully sell my mother — or at least a younger sister — for a whole meal of it.

The set piece, the raison d’être of Mei Mei, is the Hainanese chicken rice. This is usually considered a street food or a homely family favourite. But, dear God, when it’s put together with the kind of care that a young, ambitious Michelin-blessed chef can give it, it’s food that makes you love it — it will besot you senseless.

Bear with me while we get the technical stuff out of the way. A really good-quality chicken is scrubbed with salt to tighten the skin. (Quality is partially judged on the smooth white tautness of the skin).

It is slowly poached until just barely cooked in a bath of strong stock in which dozens of its forebears have also been poached. At precisely the right point, when still pink near the bone, it’s whipped out and plunged into an iced brine to cool.

It is sliced to order in front of your eyes and served with jasmine rice, moistened with the mother stock, some lightly pickled cucumbers, dipping sauces and chilli paste.

That’s the skin-and-bones of it, but like any soul food the world over, it can have magical qualities in the right conditions, prepared in just the right way. Hainanese chicken is already a killer dish but an outstanding chef, calling on memories of her mother’s cooking, is a force multiplier.

If I’m honest, I fear that London may not initially understand half the world’s enthusiasm for cold, barely cooked poached chicken with hot white rice. It could be the very definition of bland, but it is, as they say, so not.

If you wish, you can order the whole shebang with fried chicken (in itself good enough to stand against the best American versions I’ve tasted in a terrifyingly long career of chicken-bothering), but to do so is to miss the incredible subtlety of clean, clear aromas and flavours that Haigh draws out, separates and emphasises.

On the strength of her work at Pidgin, I’d have followed Haigh anywhere. I think half of us are holding our breath, frantically trying to calculate her endgame so we can book our tables a decade in advance, but until we resolve that . . . go now and experience her genius, for pocket change, propped up at an open-air counter under a railway arch.

Follow @FTMag on Twitter to find out about our latest stories first. Listen to Culture Call, the FT’s transatlantic culture podcast, which interviews people shifting culture in London and New York. Subscribe at ft.com/culture-call, Apple Podcasts, Spotify or wherever you listen to podcasts. 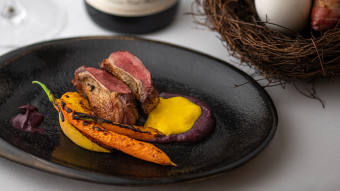 From an ‘irreplaceably wonderful experience’ to his ‘angriest experience of the year’, read our critic’s highs and lows