No end to poverty without financial inclusion, says World Bank

Finance in developing countries has to be expanded carefully, says a senior official

Two things come to mind for Ceyla Pazarbasioglu when she thinks of financial inclusion. First is the core mission of the World Bank, where she has been vice-president for equitable growth, finance and institutions since October of last year.

“You step in the main entrance here and it says, ‘Our dream is a world free of poverty.’ That’s the first thing that hits you. And I really think we’re not going to eradicate poverty unless we have financial inclusion,” she says.

Yet Ms Pazarbasioglu also warns that unless finance is expanded in the right way, it has the potential to backfire dangerously — a cautionary note that is informed in part by her previous roles at the International Monetary Fund and as a government official in her native Turkey.

“You have good finance, bad finance, and ugly finance . . . You need to make sure it serves citizens, the SMEs [small and medium-sized enterprises], and not just the banker, or the wealthy, or the chosen few,” she adds.

Ms Pazarbasioglu is on the front line of a key battleground in global development. In 2017 there were still 1.7bn adults in the world without an account at a financial institution or a mobile money provider, according to the latest Global Findex database published by the World Bank. While this has improved since 2014, when 2bn people were classified as “unbanked”, it still represents a huge mountain to climb.

The Findex report identifies China, India, Indonesia and Pakistan as the countries with the biggest shares of financially excluded individuals — but it remains a pervasive problem across other parts of Asia, the Middle East and Africa.

In Egypt, for example, the share of people aged 15 and over with an account at a financial institution rose from 13.7 per cent in 2014 to 33 per cent in 2017. That compares with well above 90 per cent in advanced economies.

Margaret Miller, global lead for responsible financial access at the World Bank, explains that these groups share several traits: individuals have lower incomes; they are geographically isolated, usually in rural areas; they have lower levels of education; and they are predominantly female — 56 per cent of the unbanked globally are women, according to Findex.

But the growth of technology including fintech is now offering a promising new avenue to accelerate the efforts already under way to narrow these gaps.

“It reduces costs, it’s much more efficient, it can be scaled up,” Ms Pazarbasioglu says. “It does come with risks as well because, you know, you really don’t want to hurt those that are most vulnerable,” she adds, referring to threats such as cyber security and people borrowing excessively. “So we have to be careful. But I think it is really remarkable.”

Last year, the World Bank locked arms with the IMF to present a joint fintech agenda at their annual meetings in Bali, Indonesia, which included a specific call for countries to “enable new technologies to enhance financial service provision” around the world.

“The number of institutions and people talking about financial inclusion and the need for it have really, I think, grown very sharply in the last decade,” Ms Pazarbasioglu says. “You also see a lot of the private sector now talking about it and being engaged.”

It does come with risks as well because, you know, you really don’t want to hurt those that are most vulnerable

Crucially, too, national regulators and central bankers, which might have resisted pushes for financial inclusion in the past for fear that they could destabilise their financial systems, have become much less sceptical. “I think it’s much more clear now that unless you have an inclusive system, it’s not a sustainable or stable system,” Ms Pazarbasioglu says. “There is much more awareness and much more understanding.”

In the Middle East and Africa, she says, fintech’s role in financial inclusion is seen as a way to help foster entrepreneurship and lower unemployment among the regions’ burgeoning youth populations.

There are specific cases that have given Ms Pazarbasioglu hope, including a recent visit to Ethiopia to see the World Bank’s women’s entrepreneurship development programme in action — an initiative that gives female owners of small businesses better access to loans and credit.

The case of M-Pesa, a mobile phone money transfer system launched in Kenya in 2007, is also often cited as a pioneering financial inclusion instrument. And Kristalina Georgieva, the World Bank’s chief executive officer, has led what is known as the African “digital moonshot” — a $25bn investment in digital transformation between now and 2030 — with the potential to add $25bn more from the private sector.

There are undoubtedly some potential pitfalls in this growing field, from saddling individuals with risky levels of debt to allowing data breaches. But on balance, Ms Pazarbasioglu believes the gains could be large across the developing world.

“What I like about technology is that it starts by asking a question, and is trying to find a solution to a problem,” she says. “How can I solve it with limited costs, and then see if it can be scaled up?” 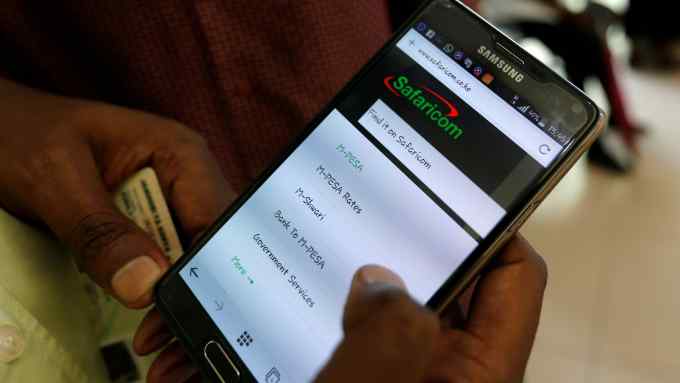