Loewe and Lanvin did nautical. Thom Browne was not nice

Unique creative visions are powerful at SS20 Paris. But some are more compelling than others

On one of the longest and hottest days of the year in Paris, Jonathan Anderson had his Loewe audience file into a concrete bunker to see its Spring/Summer 2020 wares. Yet, inside the bunker, Anderson has resurrected summer — on his terms. It came via a series of video installations by the artist Hilary Lloyd, showing sun-dappled plants, or a face with sunglasses, or the flare of sunlight through a set of thighs. It seemed to indicate the control of Anderson; yes, we could experience summer, but on his terms.

Anderson’s genius at Loewe has been in both controlling and curating an identity for this hitherto little-known Spanish leather goods brand. And it is some kind of genius, given the speed and alacrity with which he has essentially exhumed this moribund, unpronounceable label (Low-wave-ay) and it propelled it to fashion success. As well the fashion world knows, no figures are released on individual brands within the LVMH portfolio, where Loewe lies, but the house recently moved its London flagship from a euphemistically “cosy” 1,000 sq ft boutique on Mount Street (originally opened in 2011) to a new Casa Loewe, spread over 5,380 sq ft and three storeys on a prime New Bond Street location. It defines the idea of creative direction, where Anderson’s imprint and distinct intention is evident across the board, in everything from advertising to store design. His direction is assured, astute, and right.

Only his second menswear show for the label, Anderson here demonstrated not only his image-building ability, but how his own convictions can convince a wider audience. The vast majority of this show consisted of dress-like garments for men — dashikis, caftans, djellabas, tunics, you name it — yet never felt make-believe, or even difficult. Anderson has enjoyed toying with perceptions of gender throughout his career, but it’s never seemed as easy as this before — nor as realistic.

Jonathan Anderson’s aesthetic is not only strong enough to carry the two labels he helms: it is, perhaps, becoming a school of design, in the vein of Nicolas Ghesquière, formerly of Balenciaga and now artistic director of Louis Vuitton womenswear, whose protean protégés prop up a number of Parisian fashion houses. Bruno Sialelli was head of Loewe’s menswear before his appointment to the house of Lanvin in January this year: that his clothes carry some of the kooky markers of that other labels’ identity is understandable. A few menswear pieces were mixed into Sialelli’s debut show in February, which definitely hewed close to his former employ. On Sunday, in a sun-drenched piscine on the outskirts of Paris, he showed his first full menswear collection, with a dozen or so women’s looks mixed in.

The company is betting big on Sialelli and his vision. Fosun International, who also owns majority stakes in the tailors Raffaele Caruso SpA, hosiery firm Wolford and American knitwear firm St. John, took a majority stake in Lanvin last February, beating out Mayhoola, owner of Valentino and Balmain. It brought in Jean-Phillipe Hecquet, formerly of Sandro, as CEO last August. Lanvin is a smallish operation — at its peak in 2012, its turnover was €235m (losses have been incurred between 2015 and 2017, the last figures available), and it has 25 shops across the world, with plans to open four more in Hong Kong, Shanghai and New York’s SoHo over the next few months.

This show was a success — although, given how shaky Lanvin has been of late, you asked your neighbour to make sure your taste wasn’t deceiving you. It was pretty much unanimous.

“It’s kind of a topic idea of summer and travel,” said Sialelli, vaping, before the show. “The excitement of vacation — a taste of what we are all waiting for!”

He meant holidays, but what the fashion world also wants is for Lanvin to get its act together and start making great clothes again. Here, it did. The clothes were infused with nautical notions — which are not exactly groundbreaking but, oddly enough, were also a theme touched on by Anderson at Loewe. But if Anderson’s were abstract and sophisticated, Sialelli’s were silly and playful, like big sailor collars, like Edwardian children’s clothes. Some were also patterned with imagery drawn from the 1930s Babar the Elephant books by Jean de Brunhoff. They weren’t completely random: Lanvin’s original logo features an abstract image of Jeanne Lanvin, the founder, and her daughter Marguerite, hence the child’s play.

But alongside that whimsy was a real, honest-to-goodness core of commercial nous. That included “non-fashion” stuff, like pale coats in light, bouncing wool-mohair, gently sculpted gazar duffles and blousons, and sharp bombers that will appeal to men only vaguely acquainted with catwalk goings-on, who maybe come to Lanvin for a great suit. Incidentally, the womenswear shown was from the pre-collection, which delivers to store at the same time as the men’s.

There were also — importantly — accessories galore, great bags (although a little Loewe-lite) and trainers, the latter being something of a Lanvin signature and certainly a fashion house cash cow. These were no Balenciaga Triple-S (the sneakers given a major credit in helping power that brand towards their goal of €1bn in turnover) but they were good. They also linked with Lanvin’s heritage, as its former men’s artistic director Lucas Ossendrijver was one of the first to present trainers with suits. Incidentally, rumours are currently abounding that said Mr Ossendrijver, who left Lanvin last November, is heading to Kenzo, replacing outgoing creative heads Humberto Leon and Carol Lim. Let’s wait and see. But the house he left is, finally, on the right track. It should make money. Sialelli’s obvious talent deserves to, and this show was a pleasure to see.

Alongside pleasure must come pain. Staged at the École des Beaux-Arts on the Left Bank, a Thom Browne show is a form of exquisite torture — although it’s sometimes hard to decide whether the brunt of that pain is borne by the audience, or models.

I suspect the latter, this time wavering and sweltering in It’s A Knockout fat suits, unzipped to reveal the dressed as living statues in sweat-stained seersucker suits. The scene was set in 1772, so a certain Monsieur Brun — played by James Whiteside, principal dancer at the American Ballet Theatre — pirouetted about a bit before Thom Browne sent out a tricoteuse-teasing array of powdered and poufed pannier-bearing boys ready for the guillotine.

That’s all fine — we’ve seen worse. The issue I have with Thom Browne is the resolute, absolute lack of further meaning to any of these hi-jinks. Monsieur Brun, for example, isn’t anything to do with Élisabeth Vigée Le Brun, the portraitist partially credited with coxing Queen Marie Antoinette out of her hoop-skirts and into simple, easy dresses redolent of French country garb. It’s just the French translation of Mr Brown. Or maybe, Browne.

Likewise with the clothes, whose extremities are not an attempt to reset our ideas of gender, or adornment, or to challenge two centuries (and running) of the great male renunciation of frills and furbelows. They are, simply, a pointless parade of ridiculous get-ups difficult to defend against the marauding hordes calling for ridiculously-dressed heads on pikes outside the chateau gates. I can’t argue that these clothes aren’t indulgent, meaningless and a little obscene when I don’t think their designer believes they aren’t. The finale played out to Erasure’s “A Little Respect”, whose lyrics felt telling: “why’re you making me work so hard, that you give me no soul.” Indeed.

That said, Thom Browne has a tidy business — obviously not selling this kind of stuff, but shifting neat grey suits. The tailoring focus of the house enticed the Italian Zegna Group to take an 85 per cent stake last August, and Browne has around 20 stores worldwide, and a made-to-measure atelier in Paris. They can’t all be masochists. 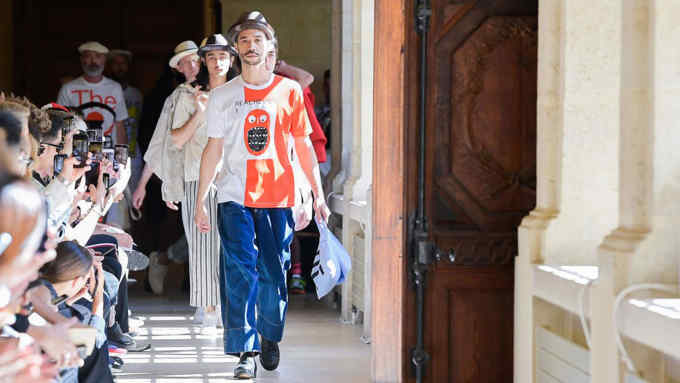