Get the newsletter now
Chechnya

Sam Jones in Zurich, Max Seddon in Moscow and Roman Olearchyk in Kyiv

Austrian counter-terrorism authorities are investigating whether the shooting of a Chechen man outside Vienna on Saturday was an assassination.

Two Russian men of Chechen origin living in Austria have been arrested and remanded in custody.

Lower Austrian police said over the weekend that “the motives for the crime are unclear”.

On Monday, however, officials confirmed that Austria’s domestic security agency, the Federal Office for the Protection of the Constitution and Counter-terrorism (BVT), had assumed control of the investigation pointing to a likely political basis for the killing.

The victim, a 43-year-old Chechen asylum seeker, has so far only been formally identified as “Martin B” by the Korneuburg prosecutor’s office, which has local jurisdiction over the case.

He was shot several times in the head at 7pm on Saturday evening, in the car park of a construction company in the Vienna suburb of Gerasdorf, investigators said.

Austrian media have widely identified him as Mamikhan Umarov, a former supporter turned prominent critic of the ruthless Chechen leader Ramzan Kadyrov — one of Russian president Vladimir Putin’s staunchest supporters. Mr Umarov has been registered as an asylum seeker in Austria since 2007.

The alleged victim — who was well known in the Austrian Chechen diaspora — went by the name of Martin Beck, and used the moniker “Anzor from Vienna” online as a blogger.

Mr Umarov’s death follows a series of recent bloody attacks across Europe against critics of the Chechen strongman that have set Chechen communities on edge and put western intelligence and law enforcement agencies on high alert.

In an interview with a Ukrainian YouTube channel in February, Mr Umarov said that he had left Chechnya in 2005, fearful of reprisals against people like him who had worked with the region's separatist government before the second Chechen war broke out in 1999.

Once in Vienna, Mr Umarov claimed he began working for Austrian intelligence in 2010 as a double agent and fielded orders for more than 10 hits against Mr Kadyrov’s critics.

In 2009, he was a prominent witness in Austrian authorities’ investigation into the murder of Chechen dissident Umar Israilov. He was officially designated as a “person at risk” from Mr Kadyrov’s regime by the BVT following that attack.

Mr Umarov claimed in the Ukrainian YouTube interview that he was offered €1.5m to kill Ihor Mosiychuk, a Ukrainian member of parliament critical of Mr Kadyrov, as well as his aide Amina Okueva and her husband Adam Osmaev, both Chechen dissidents. Mr Mosiychuk has said that Mr Umarov warned the intended victims of the plan and handed over recordings of the plot to Ukrainian secret services.

Two years later, the parliamentarian was wounded in a roadside bombing, while Ms Okueva died in the second of two assassination attempts against her and Mr Osmaev. Ukrainian officials have accused Mr Kadyrov of being behind all three attacks. Mr Kadyrov denied involvement and blamed Ukrainian intelligence.

“I think there were two motives” for the alleged hit on Mr Umarov, Mr Mosiychuk said. “One was payback for how he offended the leader of Chechnya through his blogs, and, secondly, to cover up his knowledge of contract killings in Ukraine and Europe.”

AnalysisChechnya
From the archive: Fear of Russian attack hangs over Chechens in Germany 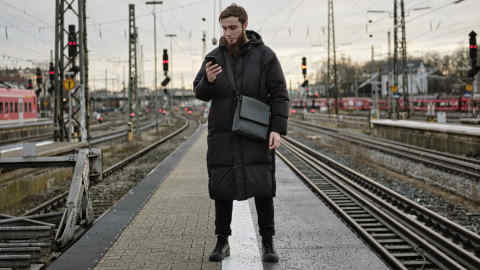 In other recent attacks on Chechen dissidents, blogger Tumso Abdurakhmanov survived an attempt on his life in February by a hammer-wielding assailant in his apartment in the Swedish town of Gävle.

In January, the prominent opposition leader Imran Aliyev was killed in Lille, France, after being stabbed 135 times.

Last August, Zelimkhan Khangoshvili, a Chechen former military commander wanted by Russian authorities as a traitor, was killed in Berlin. German authorities have publicly accused the Russian government of having ordered the hit, and expelled two Russian diplomats in response.

Mr Kadyrov often speaks openly of his desire to avenge personal slights made against him on social media.

As Mr Umarov's rants about the Chechen leader gained popularity online, other Chechen dissidents had warned him about threats to his life in recent weeks, Mr Abdurakhmanov told the Financial Times. "[Mr Umarov] called out Kadyrov, his family, and his inner circle by name and unleashed a torrent of cursing. That's why he was popular and that's why they wanted to kill him,” he said.

People who criticise Chechen authorities on WhatsApp and Instagram are frequently shown apologising profusely to Mr Kadyrov, sometimes in person, on local TV.

“Women and men are writing thousands of comments online . . . If we don’t stop them, killing, imprisoning, scaring them, then nothing will work,” Mr Kadyrov told his cabinet last year in remarks broadcast by Chechen television.

Get alerts on Chechnya when a new story is published