Putin meeting ‘may be easiest’ in week with May and Nato, Trump says

Peter Wells in New York and Demetri Sevastopulo in Brussels

Donald Trump singled out his upcoming meeting with Vladimir Putin as potentially being the “easiest” part of a one-week trip to Europe that will also include a meeting with Theresa May, UK prime minister, and Nato allies.

“So I have Nato, I have the UK — that’s a situation with turmoil. And I have Putin. Frankly, Putin may be the easiest of all,” he said shortly before leaving Washington.

Mr Trump said he had not spoken to British Prime Minister Theresa May about her strained domestic political situation, but suggested that he might speak to Boris Johnson, the former UK foreign minister who resigned on Monday, during his trip to the UK later this week. 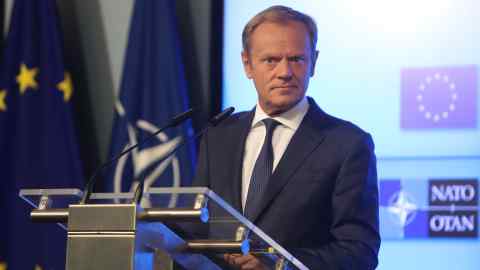 “Boris Johnson is a friend of mine. He’s been very, very supportive and very nice to me,” Mr Trump said. “ Maybe I’ll speak to him when I get over there.”

Mr Trump said he “can’t say right now” whether his Russian counterpart is a friend or foe, but added that as far as he was concerned, the Russian president was a “competitor”.