Influential foreign exchange trading venues that act as the reference price for currencies are facing a battle to maintain lucrative charges for their market data feeds, as growing competition and declining trading volumes threaten their position.

Regulators in both the US and Europe have been closely scrutinising the amounts charged by stock exchanges for market data in recent years and the cost has sparked a fierce struggle between clients and trading platforms. Data charges in currency markets have received much less attention, partly because profits have been big enough to distract from this cost and because of less stringent regulatory requirements.

However now some FX trading customers are pushing back against these high costs and many are voting with their feet. This presents a challenge for the “Big Two” incumbent platforms, CME-owned EBS Market and Refinitiv’s Matching, which currently act as key market data providers for currencies. Both face an uncomfortable problem: how to keep charging top prices for information about exchange rates if the majority of the market trades elsewhere.

Traders say the cost of top-quality FX market data, about $50,000 per month, has not changed in a decade, but its quality and usefulness have declined.

“Ten years ago you couldn’t be in the trading business without having access to those two data feeds. Now there are other ways to get information about prices,” says Phil Weisberg, head of strategic planning at tech company OneZero.

For now, both platforms retain their crowns as the preferred inputs into the pricing models of the top echelons of market makers. However, over the past five years, average daily trading volumes have declined by a quarter on both platforms. As trading activity has inexorably shifted from the venues, the data feed becomes more critical and valuable. It carries the prices that flow through the market. EBS and Refinitiv declined to comment.

In the three months to September, transaction revenues from the EBS business fell 15 per cent compared with that period last year, according to a regulatory filing from CME. Average daily volumes were 19 per cent lower at $63.3bn than in the same quarter last year.

Growing competition means equity market operators have had to reduce the fees they charge for facilitating transactions, says Ken Monahan, an analyst at financial consultancy Greenwich Associates. “This meant they have had to cut fees where they directly compete, in transaction fees, but are still able to charge for things they can uniquely provide, like market data specifically from their platforms,” he says. 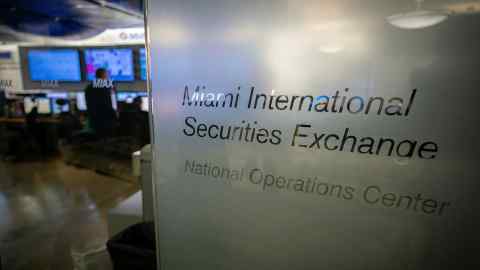 Exchanges in equity markets have benefited from being able to raise market data costs because of legal requirements that force large banks and investors to shell out for price information from all relevant markets to prove best execution.

But now US regulators are scrutinising the level of these growing charges in equity market data. In June, the US Securities and Exchange Commission and the US Department of Justice joined forces to act on equity market concerns.

Brett Redfearn, the director of the trading and markets division at the SEC, said in a speech at the time that the seven largest equity exchanges saw their market data revenues rise five times as much as their income from trading between 2013 and 2018. “These changes raise questions about whether the current level of various exchange fees for market data and connectivity are reasonable,” he said. In currency trading such obligations to demonstrate best execution do not exist in the same way, but market data is still a lucrative source of revenue for platforms viewed as “the price”. While costs have not increased, they have not fallen.

“Compared to the equities markets, the FX markets are much more decentralised,” says Chris Purves, co-head of global markets execution and platforms at UBS. “[This] has kept in check the price of FX market data.”

Currency trading takes place on dozens of platforms and the majority of deals are privately negotiated, meaning there is no clear “central price” accessible to all. Instead, investors use exchange rates supplied by EBS and Refinitiv as a reference to price deals in major currencies. Both were originally set up for the largest dealers to trade with each other, and by doing so to determine the real exchange rate.

But these deals now account for a “small fraction of the entire market”, according to analysis from the Bank for International Settlements.

“The two legacy venues can’t afford their volumes to drop much more because their market data will lose its value,” says David Mercer, chief executive of LMAX Exchange, a rival platform.

Currently, subscribers pay as much as $50,000 per month for access to EBS’s fastest and most granular data feed. Large banks and high-frequency trading companies need to spend about $1m a year just on getting access to price data in the highly fragmented market, according to people familiar with the matter.

“There is nothing wrong with monetising market data but we feel that competition is important and that fees should reflect the value of the data,” says Jonathan Weinberg, head of Cboe FX, which aims to compete with the dominant incumbents.

The costs mean that the majority of end investors such as pension funds cannot afford to directly access this information and instead rely on being supplied with the day’s highs and lows from the banks they trade with.

The head of trading at a large sovereign wealth fund says that, despite trading billions of dollars of currencies a year, the cost of accessing top quality data feeds from the two main markets is still prohibitive for most investors.

“It would be great to have but I just can’t make the business case for it,” the trading head says. “Yes, volumes have declined, but they’re still what people view as the reference price.”