Stoxx to axe 61 Russian companies from its indices

Stoxx, the operator of Deutsche Börse’s Qontigo indices, is to axe 61 Russian companies from its indices, the most concrete move yet by an index provider in the wake of Moscow’s invasion of Ukraine.

The list includes most leading Russian companies, such as Gazprom, Lukoil, Sberbank, Rusal and Aeroflot.

Overseas-listed American and global depositary receipts issued by Aeroflot, Sberbank and X5 Retail are also on the list of index constituents that will be deleted on March 18.

Stoxx cited “the extreme or exceptional market conditions” affecting Russian stocks, including “restrictions on capital flows and market disruption that materially negatively influences the aggregated liquidity, capitalisation or tradability of Russia securities, as well as the impossibility for institutional investors to physically replicate the performance of an index”, in the wake of sanctions imposed by the EU, US and UK.

The move will affect indices such as the Stoxx Eastern Europe 50, which features 15 Russian stocks, including three of the four largest, and Stoxx Global 3000.

There have been high-profile pleas for index providers to take stronger action.

Yuriy Butsa, Ukraine’s government commissioner for public debt management, on Monday called for bond investors to “lobby for exclusion of any Russian instruments from the indices”, and to “lobby rating agencies for the downgrade of the rating of Russian companies”.

“I’m not sure that these guys can sit on the fence any more. [It’s time to] put their ESG mouths where their fat wallets are and kick Russian securities out of investment indices.”

Other index providers have so far made more tepid moves than Stoxx, however.

MSCI, which runs the most widely followed emerging market equity index, said on Monday it was seeking feedback from market participants regarding the “accessibility and investability” of Russian equities, as it considered the “appropriate treatment” of the market.

JPMorgan, which oversees the most important EM bond benchmarks, tracked by a total of $842bn, said Russia and Belarus were under review for removal from the environmental, social and governance (ESG) versions of these indices, as of March 31.

Banks placed under sanctions such as VTB Bank and Vnesheconombank, are under review for removal from JPMorgan’s hard currency indices, and new debt from sanctioned entities will no longer be eligible for any JPMorgan index from Tuesday.

Pre-announced plans to include Ukrainian local currency government bonds in JPMorgan’s GBI-EM by the end of this month will now be on hold.

A fund manager at a large investment manager said an important criteria for countries to remain in the EM bond indices was observable secondary market liquidity, which “clearly was not the case [on Monday]”.

“If this continues, we expect the bond index providers to consider the position of Russia,” he added. “Russia is completely untradeable at present, there is virtually zero liquidity in FX and in the sovereign dollar credit market, while the local bond market and equity market remain shut.”

S&P Dow Jones Indices said it was “monitoring the development of the conflict in Ukraine and is reviewing the recently issued sanctions”.

Separately, MSCI downgraded the sovereign ESG ratings of both Russia and Belarus — but only to the second-lowest possible rating of B, though with a negative outlook in both cases.

The ratings provider has slashed Russia’s scores for “stability and peace”, “political rights and civil liberties” and “governance effectiveness”.

This categorisation “is reserved only for highly exceptional events that may significantly affect the risks to an economy’s sustainability and competitiveness”, said MSCI.

Belarus has been placed in an identical camp. It previously had a sovereign rating of BB, while Russia was BBB

Ukraine has been held at BB, but with a negative outlook. 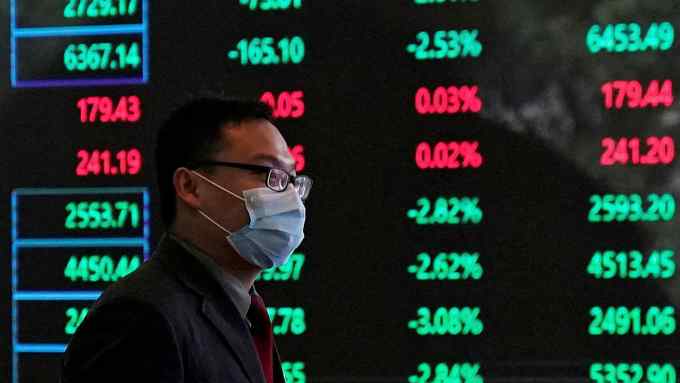