As China’s Hubei province was locked down in January, weeks after coronavirus emerged in the capital Wuhan, frantic efforts were made to keep one local factory running.

Reckitt Benckiser’s second-largest Dettol plant worldwide is in the city of Jingzhou, just over 200km from Wuhan, the centre of the virus outbreak.

With sales of disinfectant soaring, the UK consumer goods group was forced not only to sustain operations in rapidly changing conditions, but also to raise production quickly. The Hubei factory, which usually exports around 20 per cent of its output, mainly to Japan and Europe, has increased its daily capacity from 40 tonnes to more than 400 during the pandemic.

David Gao, the site manager, said — with some understatement — that maintaining operations at the factory was “a unique experience”. The efforts made at the Dettol plant have since been adapted for use throughout Reckitt’s global operations, providing a model for the company of how to keep one of its key products flowing during the crisis.

The first challenge facing Mr Gao was getting employees to the factory. As lockdown came into force during Chinese new year festivities, employees at the Hubei plant were told they could keep working on a “voluntary basis”. Many went to considerable lengths to do so. Li Weimin, production supervisor, drove 300km to pick up 30 workers. At first only 50 of the plant’s 560 staff were able to return. One, Chen Ying, walked 105km to get back.

“We kept [the factory] running without one day’s stop,” said Mr Gao. As he could not be there himself, lockdown confined him at his Wuhan home for two and a half months, he had to lead the operation via Skype, WhatsApp and WeChat.

Conscious of the need to minimise infection, Reckitt hastily arranged hotels for employees, introduced temperature checks and kept a doctor and nurse on hand.

Sachets of a sweet, orange Chinese traditional medicine were handed out by the local government, thought to help prevent the virus.

So far, there have been no cases at the Jingzhou factory.

Procurement was another significant obstacle. Reckitt cut the range of different Dettol products made in Jingzhou by 80 per cent to help churn out the basic product quickly. But as demand for the disinfectant spiked, ingredients became scarce. “Due to the city lockdown, we have lost hundreds if not thousands of suppliers,” said Mr Gao.

Some raw materials, such as pine oil, caramel and fragrances, were flown in from overseas. Others required more planning. Isopropanol, an alcohol in high demand during the pandemic, could not be flown because it is classed as hazardous. Instead, a load was trucked 900km from Guangdong province after a race to secure permits and find a driver prepared to travel in lockdown.

Typically, around 30 trucks of supplies were trying to reach the Dettol factory each day, often delayed by bureaucratic problems in crossing provincial boundaries. Mr Gao said that on WeChat, Reckitt’s China team was incessantly problem solving. “We have 50 bottles stuck here . . . This material is stuck there.”

During February and March all of the factory’s employees returned to work, requiring 1,000 masks a day to protect them from infection. With both protective equipment and disinfectant scarce in the local market, Mr Gao cut a deal with a manufacturer. It would supply masks to his team, while his factory provided disinfectant to the mask makers. They would sort out payment later.

The company, whose roots stretch back 160 years to the Hull-based creators of Dettol, Reckitt and Sons, has already reported some gains during the pandemic. Its first-quarter results released last month showed annual like-for-like sales growth hitting a record 13.3 per cent. It does not break out figures for Dettol — but sales of Lysol, its US disinfectant, were up 50 per cent and Reckitt said results for the full year were set to exceed expectations. The group’s share price has since reached its highest level in 18 months. It has not so far had to make job, pay or dividend cuts.

Reckitt’s latest numbers contrast with rival Unilever, which has reported flat underlying sales growth. Part of the difference was down to product areas — as the world’s largest ice cream maker, Unilever took a hit to sales in that area, for example. Reckitt’s other products include Durex condoms and Air Wick air freshener. But analysts also said Reckitt had responded to the crisis and its associated demand spikes better than expected, given that it has been battling supply chain problems.

“I think the market was surprised [Reckitt Benckiser] were able to meet the demand as well as they did,” said Alicia Forry, an analyst at Investec.

It has been a tough early test for Reckitt’s new chief executive, Laxman Narasimhan, who started in the role in September. Mr Narasimhan had already hit on the Dettol product as a way to infuse Reckitt with a fresh sense of purpose. He recalled its use in his childhood home in India as his brother suffered from a serious illness.

As the first cases of coronavirus were detected in Hubei, the chief executive was making plans for a growth push in the Chinese market. But he had to change tack quickly to deal with a situation he said was “like a war operation”. “Every day you are getting calls and more calls,” said Mr Narasimhan, who previously worked at McKinsey and PepsiCo.

The pandemic came against a backdrop of operational problems for Reckitt.

“We knew that we had challenges in our supply chain, particularly in the US,” said Mr Narasimhan. Reckitt’s hard-driving management culture had in recent years failed to deliver strong growth, as it wrestled with problems including a cyber attack and botched product launch.

Other challenges emerged. From late March, Mr Narasimhan was locked down in London with his elderly mother — his wife and two children stuck in New York, from where they had planned to join him. The chief executive admitted his video calls had been interrupted by supermarket orders arriving: “I’m now understanding a lot of the pressures people face managing work and personal life,” he said.

As it became clear the virus outbreak would not be contained, executives from around the company turned to Mr Gao for advice.

Some of his experiences — such as rearranging factories for social distancing — could be directly applied elsewhere, but different territories also required their own solutions. In the Philippines, one of the world’s most severe lockdowns included stiff penalties for people breaking quarantine. With office workers confined at home, Reckitt’s offices in Makati, in the Metropolitan Manila region, were converted overnight into accommodation for more than 200 factory staff, complete with showers and canteen.

Globally the company eventually housed 1,000 workers. “We put in accommodation, we arranged transport, we arranged everything. In this position, we are making decisions which are for life or for death,” said Frederick Dutrenit, senior vice-president for global supply, who has been based in southern France.

Across the world in Salt Lake City, where Reckitt has a factory, a communications campaign was launched to persuade Americans to submit to temperature checks. An earthquake struck in March; the plant closed for just 12 hours.

Broader problems ranged from misinformation to protectionism. Countries including South Africa and Bulgaria restricted exports of disinfectant. In April, Reckitt had to warn against injecting or ingesting disinfectants after the US president, Donald Trump, suggested testing them as a coronavirus treatment. Elsewhere, local communities had to be informed of factory employees’ status as key workers during lockdowns: in some territories they felt “personally threatened”, said Mr Dutrenit.

The costs of the effort may put pressure on Reckitt’s margins, Ms Forry said. Mr Dutrenit acknowledged the push came at a price: “The agility we have been able to create has been quite amazing. Cost has never been a factor . . . Doing everything extremely quickly has been quite significant [in terms of cost].”

In Wuhan, Mr Gao said the broader situation was “80 per cent or 90 per cent back to normal”, but the factory was still fighting to meet Dettol demand. “Every day, every week we are increasing capacity, increasing fulfilment rates. We are still under pressure to deliver.” 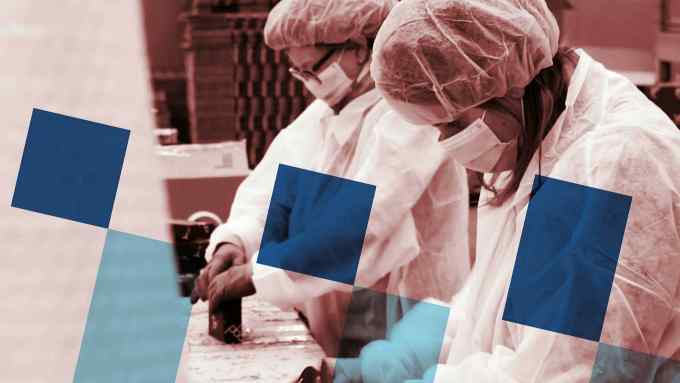