Start a 4-week trial
How To Spend It  Gadgets

7 gadgets to love this week

How to see if you’re going bats, the perfect Zoom light, Soda Stream 2020, and the bionic bonding agent…

To the Batphone!
I can’t claim to be much of a naturalist. But, as part of the reawakening so many of us have had to the natural world these past few months, I was pleasantly surprised to discover that bats are almost as common in British cities as in places I, in my ignorance, have more commonly associated them with – such as the sticks or the Med. And when I heard you can buy bat-finding attachments for smartphones, which detect the creatures’ ultrasonic radar signals and can identify which bat species is out there in the dark, I set out to find the best way to turn my mobile into a Batphone. All paths led to the Echo Meter Touch 2. The neat little device comes in iPhone and Android flavours and is a portal into an engrossing pastime for these long winter nights. When freedom permits, it might be worth joining a guided bat walk with The London Bat Group (londonbats.org.uk).
Wildlife Acoustics Echo Meter Touch 2, £200, batdetectors.co.uk

Time to emerge from the Zoom shadows
As we’ll be Zooming for a living long into 2021, you might want to give proper thought to the set-up in your home office. Obliging your colleagues, family – even the people watching you being interviewed on TV – to stare up your nose is so last spring. You can sort out the angle issue by doing calls from an iPad (or phone) mounted on a Lamicall Gooseneck Tablet Holder (£25, from Amazon). Lighting is another matter. Many people appear as silhouettes because their device is reacting to a bright light source, typically a window, behind them. This neat little panel of LED lights from LituFoto is the solution. It’s quite a powerful light designed to be mounted on a camera, but set it to its gentlest intensity level and warmest colour temperature, with the light diffuser clipped on, place it a metre or more away, and it’ll bump up the light on your face rather flatteringly. And with the brightness at its lowest, you will get enough hours on a charge to survive your most long-winded colleague. Allow time to experiment with the best place and distance to mount the LituFoto F18. It may be best to buy a mini camera tripod for the job.
LituFoto F18, £50, gadgetbag.co.uk

Sodastream saves a lotta bottle
Until a friend recommended SodaStream, I was buying half a dozen plastic bottles of fizzy water a week. Not great environmentally. So I took their advice, bought a SodaStream and loved it. It saved money and a lot of plastic. I hadn’t previously considered SodaStream because I associated it with my parents’ dusty old cocktail set. I used to use the discarded little grey CO2 capsules as pretend bombs for my Airfix Lancaster to drop on my brother in bed. However, the venerable British company, which goes back to 1903, was bought out in 1998 by an Israeli business and, with some Yves Béhar design input, began producing stylish machines. Its new electronic SodaStream machine is an order of magnitude better than the one I bought. You gently slide reusable bottles into a cleverly designed clamp – previously you needed to use some upward force – then press on one of three buttons, depending on the level of fizz you like. It’s mains-connected and the reusable CO2 canisters are readily available. SodaStream calculates its machines save on average 1,282 single-use plastic bottles per household, which for a family seems a pretty legitimate number.
SodaStream One Touch Electric, £130, sodastream.co.uk

A UV beam that will stick almost anything back together
Mending is officially cool. The London Waste and Recycling Board recently reported that almost 70 per cent of Londoners surveyed said they’d repair more items such as clothing, electricals and furniture if only they knew how. And Roger Daltrey of The Who has revealed that in the 1960s the band used to glue together the guitars they supposedly smashed on stage. This new Bondic can mend practically anything, be it jewellery, a half-perished phone cable, a leaky pipe or a pair of glasses. Developed using concepts from dentistry, where adhesives cure by ultraviolet light, Bondic comes in an applicator with a built-in UV beam. You apply the liquid, shine the light on it for a few seconds and end up with a ludicrously strong and durable mend that can then be sanded down or painted. I called to congratulate Robert Harbauer on this amazing glue, the first I’ve ever known to work. “First thing. Glue is a four-letter word,” he said. Bondic bills itself as a “liquid-plastic welder”. I will stick to Bondic from this day forth.
Bondic, from £20, notaglue.com

A truly Remarkable smart pad
In late 2017, I was one of the first buyers of a brilliant Norwegian electronic pen and pad that recreated the feeling of writing on paper and whizzed your scribbles into the Cloud. Remarkable was a life-changer. Being able to access my written notes instantly – and having them meticulously filed – has been useful on a daily basis. Now there’s a new Remarkable, and I have rarely known an already magnificent product to be so comprehensively improved on. As well as being reduced in price from its original £579, the pad is now far less chunky. And the three physical buttons on the bottom, which were too easy to press accidentally while you were writing, are RIP. Actions such as flicking through pages are now done by a finger-swipe. Best of all, you can now rub out a mistake just by turning the pen upside down and using the other end, like an eraser. You can also make the Remarkable 2 work as a reader for PDFs. And to transfer my documents from version one to two was seamless. All the pages from the old Remarkable appeared as if by magic on the new one.
Remarkable 2, £399, remarkable.com

Leading the dash for the perfect dash cam
There is an argument that it’s bonkers these days to drive without a dash cam – ideally one that connects with a rear-facing video camera filming the idiots behind you. (Though it would be quite awkward if it established you were the idiot.) Nextbase, which has been perfecting dash cams since 1999, has now launched this 622GW model, which has a good claim to be the best and most sophisticated on the market. Modest looking – since gorgeous styling isn’t called for here – it’s crammed with features, and simple as pie to use. The image-stabilised 4k video is so good it’s mesmeric – and sharp enough to record number plates even at some distance. The night vision is remarkable, the weather-penetrating technology seems to be highly effective (I couldn’t check because there was no fog or snow). It embeds the truly great What3Words location system to pinpoint your position to 3m, and will even sense motion and switch on if someone bumps into you while you’re parked. And you can buy an add-on rear-view camera.
Nextbase 622GW, £249, nextbase.com

Now, hear this…
If you think your hearing is fine but your children keep asking why you have the TV on so loud or why you cup your ear at the dinner table to hear them, you’re likely a classic not-exactly-deaf boomer. And while you can differentiate yourself from being merely old by explaining that it was those nights in Studio 54 that did for your hearing, you’re probably still not deaf enough to start out on the serious hearing-aids trail. 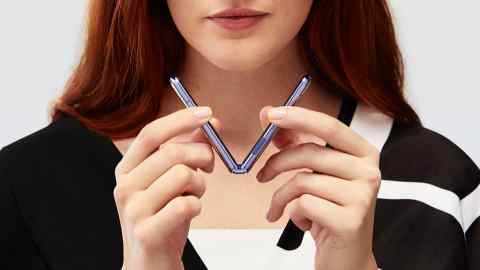 This hearing earbud, the Olive Smart Ear, from a Korean startup, is among the first of what I am sure will be an increasing number of PSAPs (personal sound amplification products) that are available over the counter. It’s a reasonably stylish little amplifier designed for one ear or two, but sold singly, as they see most people just popping one in to help out over dinner, or when watching TV with other people. It tests your hearing and adjusts itself to suit you via its phone app, and can then be set, using the app again, for conversation mode, TV mode and degree of amplification. My hearing is quite good, but when I turned the TV too low for my comfort and inserted an Olive at 50 per cent volume, it was well-defined and clear again.
Olive Smart Ear, £199, hearingsupermarket.co.uk