Life after lockdown: welcome to the empty-chair economy

As Europe and the US relax restrictions, they are moving into a halfway house of activity to contain coronavirus

Ben Hall in London and Daniel Dombey in Madrid

Spain will be open for business on Monday. But, by appointment only. Having implemented one of the toughest coronavirus lockdowns in the world over the past six weeks, the Spanish authorities will gradually relax some of the restrictions from next week, including allowing smaller non-food shops to reopen their doors.

But there is a catch: at many shops, customers will first have to book.

Daniel Moratilla, who runs Bike Brothers, a bicycle shop near Madrid’s Casa de Campo park, already has 15 appointments lined up for Monday and expects to have 30 to 40 a day thereafter. The booking system is supposed to be a temporary safeguard to limit the risk of contagion, but Mr Moratilla will keep it going because his 70-square-metre shop is too small to allow social distancing between his customers.

“It’s as if we are doctors or dentists,” says Maximino Sordo, who runs a shop in central Madrid with no bookings yet for next week. “But we are a hardware store.”

Welcome to the new economic twilight zone that is likely to be a feature of the western world for several months to come. Governments in Europe, the US, Australia and New Zealand have begun to ease the extraordinary stay-at-home orders that have helped contain the spread of Covid-19.

But in most places, it will be anything but business-as-usual. Instead, the next few months are going to feel like an empty-chair economy, with new shift patterns at factories, half-full buses and trains, staggered opening hours and unusually roomy restaurants.

With no vaccine or treatment available, swaths of economic, social and cultural life will remain subject to social distancing requirements and travel restrictions. Consumers and managers are coming to terms with the need for fewer people in the workplace at any one time — potentially reducing productivity and output.

After a week in which the US and the eurozone recorded historic slumps in gross domestic product in the first quarter — and a further 3.8m Americans filed jobless claims bringing the total since the crisis began to 30m — economists are revising down already gloomy predictions for the second quarter of 2020.

The once hoped-for V-shaped economic recovery now looks more like — at best — a stretched U, even if financial markets, supported by massive central bank firepower, have been on a tear.

“We could be facing a zombie recovery where, in economic terms, we are not really alive and not really dead,” says Luis Garicano, a Spanish economist and member of the European parliament. “It is an in-between world, where things aren’t so bad you get massive government support but not good enough for the market to support activity.”

Governments are tentatively trying to strike a balance between relaxing restrictions too slowly and causing lasting economic damage, and risking a devastating second wave of infection by moving too quickly. French prime minister Edouard Philippe captured the dilemma facing policymakers when he unveiled France’s deconfinement strategy this week.

“It is a difficult tightrope,” Mr Philippe told the National Assembly. “A little bit of imprudence and the epidemic takes off again. Too much caution, and the country collapses.”

With the encouragement of President Donald Trump, a handful of US governors in states such as Georgia, have pressed ahead in recent days to reopen businesses even though they do not appear to comply with White House guidelines that they should demonstrate two weeks of a “downward trajectory” of confirmed cases.

In the biggest economies, according to plans presented by Europe’s leaders in the past two weeks, the exit from lockdown will be tentative, gradual and, in many places, complex as rules are adapted to local circumstances.

Policymakers are closely following the scientific modelling of the impact of deconfinement measures on coronavirus transmission to assess the risk of a second wave.

German chancellor Angela Merkel, who warned her country was on “the thinnest ice” as it began last month to relax restrictions, on Thursday postponed a decision on reopening kindergartens and schools until there is more evidence on the likely impact.

Germany, which has done better than most to manage the pandemic, has become a test-case for how the rest of Europe will look as the lockdown is eased. It became the first big country to open smaller shops and car showrooms on April 20. But a week later, the rate of infection — the R number as measured by Berlin’s Robert Koch Institute, the public health agency leading the country’s fight against coronavirus — edged up to 1 before dropping back the following day. There is still much uncertainty about the effect of easing restriction on infection rates.

Like many other countries, France’s loosening plan is tentative and progressive. It starts on May 11, with the reopening of smaller non-food shops, junior schools and small museums — all with strict social distancing. Non-essential trips of more than 100km are banned. Only at the end of the month will the authorities decide whether to reopen high schools, restaurants, bars and beaches.

Spain, the country with the third highest death toll in Europe despite having one of the strictest lockdown regimes, published on Tuesday an exit strategy of mind-boggling detail. It gives no fixed timetable but instead aims for four phases of relaxation before arriving at a “new normality”, hopefully, at some point in late June but possibly later.

For example, restaurants will be permitted to open from next week for takeaway meals. The following week they can serve customers on their terraces at a maximum of 30 per cent of normal capacity. If all goes to plan, a few weeks later they can resume table service inside but with only one-third of covers. Spaniards would have to get used to taking away their favourite paella dishes, Prime Minister Pedro Sánchez said in an address to the nation.

But Hostelería de España, the hospitality industry trade body, warned that such drastic capacity restrictions could cause 30 per cent of restaurants and bars to go under unless the government provided further financial help.

Across the world businesses are rushing to implement new safety protocols to protect their employees and customers, so they can reboot activity.

Business is booming for makers of Plexiglas barriers, which are being installed at supermarket checkouts and corner shop tills around the world. Claudio Ferrari, who runs Nuova Neon Group, a small plastics manufacturer near Modena in northern Italy, says that in the past few weeks he’s been “overwhelmed” by demand.

The company is receiving orders from French restaurants and German automakers as well as shops, banks and pharmacies. They are even making Plexiglas cubicles to protect sunbathers in Italy’s regimented beach clubs.

“We’ve been around for 30 years and we’ve always produced showcases for museums or shops that put on display their products. But we’ve never experienced anything like this,” says Mr Ferrari.

Waffle House, a popular restaurant in America’s Deep South, has reopened in-house dining in about 400 of its locations in Georgia and Tennessee, two states where Republican governors have moved swiftly to loosen stay-at-home orders. Seating is limited, diner booths have been closed and menus removed from tables. Ketchup containers are sanitised before and after each use.

“We have to move forward,” says Njeri Boss, a Waffle House executive. “We can’t continue to sit moribund.”

For many businesses, the biggest problem as the lockdown eases will be a lack of demand from fearful customers. Germany’s experiment with reopening retail has been sobering. The Alexa mall, a stone’s throw away from Berlin’s Alexanderplatz, was open on Thursday but almost empty. A saleswoman in the Levi’s shop says customers were trickling back — but usually just to return clothes. “They need the cash more than the new clothes,” she says.

CoffeeDesk, a normally bustling café in central Warsaw, has reopened to sell takeaways and coffee-making equipment after weeks of being shut. But it is quiet at the moment.

Owner Lukasz Wichlacz, says he expects a return to business-as-usual to take a long time. “I don’t think that things will return to normal this year. I think that there could be a second wave [of infections], for example . . . And I think people will be afraid . . . and this is a danger,” he says.

Coronavirus: free to read
How close is the UK to easing coronavirus lockdown? 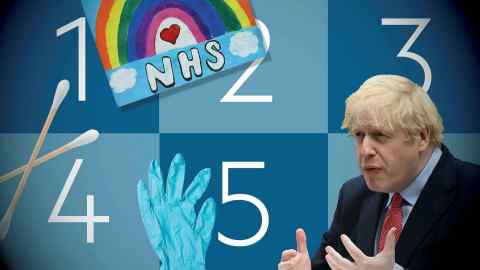 Many companies will need to completely reappraise their business models to assess whether there is still demand for their products and services and how they can meet them, consultants Bain & Company said in a report this week.

“We think the short-term impact of this crisis is going to be absolutely huge and it will leave a scar on the economy for years,” says Andrew Kenningham, chief Europe economist at Capital Economics. “But once a new equilibrium is eventually reached, there is no reason why there should be higher unemployment or significantly weaker growth.”

That new normality feels like a distant prospect. In Spain, adults will be allowed out for a daily stroll this weekend, but they will have to take their paseo in shifts. For the country’s citizens, it is a strange taste of freedom.

Additional reporting by Guy Chazan in Berlin, Lauren Fedor in Washington, Davide Ghiglione in Rome and James Shotter in Warsaw