The dream world of Liselotte Watkins

A vision of Italy filtered through a Swedish lens

“Millesgarden Museum is the ultimate showroom,” says the Swedish artist Liselotte Watkins of the sculpture park, gallery and villa that sits on the island of Lidingö in the Stockholm archipelago, where her solo show opens this month. Built at the turn of the century (1906-1908), the home and studio of the late sculptor Carl Milles is filled with the angels, goddesses and light-footed naiads that secured his place as the “master of fountains”. With architecture that blends the national romantic style with neoclassical flourishes – not least the 50-odd columns that frame the sculptures and fountains in the garden – this is Scandinavia’s ode to ancient Rome.

“It’s such a magical place,” says Watkins, who returned to Millesgarden for the first time in decades this year, in the depths of winter, to prepare for her exhibition. The event marks something of a homecoming for Watkins, who was born in Nyköping, 100km south of Stockholm, but has lived in Italy – first Milan, then Rome and, more recently, Tuscany – since 2009. “Coming back here after living in Italy, I saw it all with fresh eyes,” she says. “You see Milles’s love of Rome and Naples at every turn: in the columns, the colours and the architecture. The garden is full of Scandinavian trees but even in the snow it has this Mediterranean feel.”

It’s through this same Swedish lens that the artist is presenting Liselotte Watkins’ Italy, a collection of large-scale canvases and painted ceramics that will inhabit Milles’s home and garden studio, a loggia featuring a Bay of Naples fresco. Many of the works on display were created last year while Watkins was confined to the Roman apartment she shares with her Swedish husband, a fashion communications director, and their two children. “I’ve just been painting, painting, painting,” says the 50-year-old artist, who began fashioning Neapolitan-toned scenes that she cast in imaginary interiors.

Whether it’s linens, family or food, the Italians cling to their rituals and routines in the most amazing way”

“I did a lot of daydreaming,” she says of the homes and old seaside apartments that she’d stayed in during bygone Italian holidays and which found their way onto her canvas. Letto Singolo portrays a pale-blue room with a single bed and unadorned furnishings, while La Tenda Rosa depicts a dusky-hued chamber with a simple clock and candle by the bedside. Some paintings also feature her daughter Ava and her friends. Though these spaces are tinged with nostalgia, Watkins imbues them with a sense of timelessness. “I can almost smell the mothballs and feel the heavily starched bed linens,” says the artist, who intended the scenes to be inviting to the viewer. “I wanted it to feel like you’re opening the door to these rooms, and wondering who lives there and how long it’s been since someone slept in the bed.”

Art has always been a means of escape for Watkins. The daughter of a truck driver and welder and a housewife, as a child she found a portal to fashion and culture through her local library. She spent her days drawing and obsessing over the 1983 film Flashdance. “I was very eager to get away,” says Watkins, who left for Texas to stay with her mother’s half-sister as a teenager and found American life enchanting. She later attended the Art Institute of Dallas to study advertising and illustration after encouragement from a high school teacher who’d spotted her aptitude. Following a brief return to Stockholm, she moved to Manhattan in the 1990s.

Watkins landed her first job after meeting the art director of Barneys New York, who commissioned her to create the department store’s weekly beauty advert for The New York Times. It was the beginning of a highly successful career as a fashion illustrator that saw Watkins creating her signature graphic line drawings of liberated women for everyone from Prada and British Vogue to Mac and Marimekko. “Illustration has taken me to so many different places,” says Watkins of her itinerant creative life, which has played out between the States and Europe and included a stint in Paris, where she met her husband. “It’s been incredible fun.”

That warp-speed existence began to decelerate after the birth of their son in Milan in 2010. “Being in Italy forces you to slow down,” she says. “I had time to sit and think and draw.” It also marked the start of a shift in her work from illustration to fine art. “At a certain point my work became more abstract and experimental. I stopped working commercially and started painting.”

The creative awakening began with Watkins playing with the amphorae she’d find at Italian flea markets. From the Greek “to carry on both sides”, these double-handled, narrow-necked terracotta pots have been used to store wine and olive oil since ancient times. Watkins would carefully clean them before painting each with decorative patterns and cubist female forms. “They’re these very practical pieces that have no monetary value, but I found the shapes so interesting,” she explains.

The containers became a medium for Watkins to explore the Italian culture she found herself immersed in. They were also a way for her to dip her toe in the world of decorative art. “It was very liberating painting on a 3D object,” she says. “Like Warhol, there’s this unwritten rule that you can’t be an artist if you’ve been an illustrator. I was afraid I’d be judged.” Contrary to her fears, her work has been met with recognition, and most recently her output turned to collaborations with the interiors brands Svenskt Tenn and Established & Sons, as well as a 2019 exhibition at Villa San Michele in Capri, with which she continues to work.

But Watkins is perhaps best known for her figurative works on canvas charting her observations of everyday life. What emerges from these paintings is how much Italy continues to inspire her. “I’m fascinated by the power of the sea in Italian culture,” she says of the section in the Millesgarden display that is devoted to Mare. “All these different generations of women sit and talk and play cards and eat, and they all look so comfortable. It feels so exotic to me.” 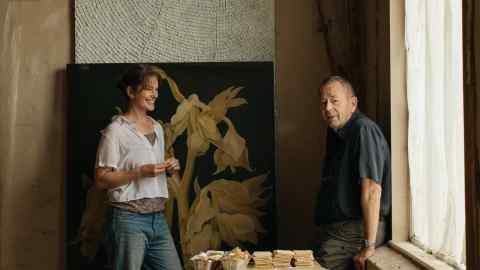 The freedom from inhibition revealed in this work is in stark contrast to Watkins’s own body consciousness. “It’s a misconception that Swedish people are very liberated in that way,” she says. “We’re not.” The latest works in the Mare series, which will be housed in Milles’s studio, are bolder and more monumental than ever. “They’re my big women,” she says of the large-scale canvases she’s created in response to the grand proportions of the space. “My girls had to come in and own the room.”

In many ways, Watkins’s pictures reflect the traditional roles played by women in Italian society. And, besides her son Wim, men are notable only for their absence. Rather than pertaining to political commentary, these works, she says, are a record of her cultural observations – they are memories and little stories. “Everything here is so sacred,” she says. “Whether it’s linens, family or food, the Italians cling to their rituals and routines in the most amazing way.”

Lately, Watkins, having returned to Italy, has been spending time at the 19th-century Chianti farmhouse that she and her family have been renovating for the past three years. It’s set in the Tuscan hills close to Siena, in a landscape of olive trees and vineyards, with room for a spacious studio inside a former stable. “I have no desire to go back to the city right now after spending so much time indoors over lockdown,” she says. She is currently working on paintings for an exhibition that will go on show at the Stockholm gallery CFHill next year. In the mix will be giant wall hangings and more portrayals of the country that continues to hold her in its thrall. Though as a Swede she’ll always be an outsider, her art offers a sense of ownership – it is a window to Watkins’s own romanticised Italian worldview.

“Liselotte Watkins’ Italy” is at Millesgarden Museum until 21 November; millesgarden.se