Anne Tallentire is a queen of anti-spectacle. For decades, she has created photographs, films, performances and installations so far removed from the bombast and glitter of much contemporary art that they have often slipped below mainstream radar. Yet on closer inspection, her art crackles with political fire, operating as a ferocious interrogation of social justice and civic space.

Of late, Tallentire has enjoyed wider acclaim. The recipient of a Paul Hamlyn award in 2018, she enjoyed recent solo shows at Grazer Kunstverein in Graz, Austria, and at Derry/Londonderry’s Nerve Centre in 2018. In 2021, she is scheduled to have a solo show at the John Hansard Gallery in Southampton.

This month Hollybush Gardens, Tallentire’s London gallery, will showcase her work on its platform — entitled “How are we to speak of common things?” — at Art Basel’s Online Viewing Rooms. The presentation focuses on a series of photographs whose title, From, In and With, typifies her art’s oblique, downbeat magnetism.

It’s no surprise when Tallentire tells me that the subjects these pieces are “very ordinary things” including a hole-punch, ruler and eraser. But I am struck by the note of longing when she adds that these simple objects are longtime residents in her studio.

Although close to her home in London’s Hampstead, Tallentire has maintained the requisite distance from her workplace since lockdown began. She and her partner Cordelia, both of whom are asthmatic and of an age (Tallentire was born in 1950) when risk-taking is discouraged, have left their home only for dawn walks to Hampstead Heath.

“Now we have to slowly adjust to going out again,” she says, sounding a little daunted.

I doubt she’ll be deterred. The story behind From, In and With shows her resolute determination — in this case, to wring every last ounce of possibility from humble materials.

The photographs — 24 in all, Tallentire says, with “six or seven” on display for Basel — emerged from a commission she received in 2013. Called Still We Work, it focused on the relationship between women and work. She interviewed women in architecture, she tells me, because the field was having an “exciting” moment in Ireland and women “led the storm”.

Tallentire’s interlocutors included Grainne Hassett of Dublin-based firm Hassett Ducatez Architects and Ellen Rowley, a historian whose work on social housing informs Tallentire’s concerns. She asked each woman to look at an image of buildings in Dublin and talk about them “in their own voice, in a conversational tone”.

Tallentire gave her collaborators “a strict limit” of 100 words. (That discipline accounts for the balancing act between messiness and meticulousness that characterises much of her art.) She wanted to “glean something” about how the women thought about their world, and then used their descriptions as a departure point for assembling small groups of objects found in her studio by “making links through space, colour and material”.

After making drawings of these gathered objects, Tallentire took photographs. The images that result are captivating, both for the spare theatre of their formal juxtapositions and for their refusal to be classified.

On the one hand, what could be less grandiose than a yellow ruler alongside a perspex paper-clip container and two anonymous rectangular boxes, one adorned with wobbly black vertical lines in felt-tip? On the other, the un­remarkable stationery takes on a new, quasi-classical aura when it is stripped of all functionality and displayed purely in terms of colour and form. In one image, a red wheel of masking tape pounces off the surface; in another, a sheet of glass appears to levitate alongside a cardboard magazine file.

In engaging with women from Ireland, Tallentire forged one more link in a chain of associations between her practice and the land of her birth. Growing up near the north-south border in County Armagh, she was always conscious of “inequality [and] political tension”, an unease that distressed her even as a young child. She’s sure this “feeling that I was in the wrong place” in part accounts for the issues of “displacement and dislocation” that haunt her work.

Those ghosts peregrinate from early pieces such as “A Gap of Two Birds” (1989) — a performance and installation piece with “NORTH” and “SOUTH” inscribed on paper and on glass screens — and “Back”, a 2018 performance in which she read from a fantasy film script set both in Northern Ireland and in an abandoned factory in northern Italy that served as a makeshift home for a migrant community.

The potency of Tallentire’s art lies in what it leaves unsaid, a disparity between her urgent politics and her understated expression. Although she’s a friendly interlocutor, I suspect that she wishes her personal story could also remain unspoken. She says quietly: “I don’t talk a great deal about where I’m from.” But it’s telling that as a young artist, her enthusiasm for the Arte Povera movement chimed both with her politics and the fact that her own resources were limited. While her parents “read a lot, thought a lot, and were very very encouraging about whatever we wanted to do”, she only got to art school in London — The Slade — in her late thirties.

Before then, in the 1980s, Tallentire had studied part-time at the School of Visual Arts in New York. During what sounds like a golden moment, she attended feminist workshops, discovered performance art — “I thought I’d died and gone to heaven”, she says of her first encounter with Meredith Monk — and heard radical critic Lucy Lippard speak, an experience she says was “profound . . . for someone without a formal education”.

The surge of adrenalin in Tallentire’s voice is infectious as she paints a picture of a world — chaotic, vital, cash-poor, ideals-rich — that seems distant from the hushed, orderly opulence of much of today’s contemporary art world.

Yet she does not think that art’s political clout has been entirely defused by dollar signs. “Artists will find the questions that need to be addressed in whatever time they find themselves in,” she observes calmly, adding that today’s public is “more aware and interested in what artists can do.”

For years, anxious that her work should not become “commodifiable”, she worked without a private gallery. Now, however, she “trusts Hollybush Gardens completely. As for the fair circuit, Tallentire says that even when she confined herself to public sector exhibitions, she often visited art fairs because they were somewhere you could “hear interesting talks, meet interesting people and see great work”.

Turning to art’s ability to make a difference in the world, she cites the decision by last year’s quartet of Turner Prize nominees to share the prize in a show of political commitment to joint rather than individual endeavour. “It’s an example of a collective dynamic at work in the visual art sector,” says Tallentire. No one could doubt that the author of this work is equally committed to those inclusive principles.

Explore the series
READ MORECollecting: Art Basel in Basel 2020
Russell Tovey: ‘Art has become a huge part of my life’ 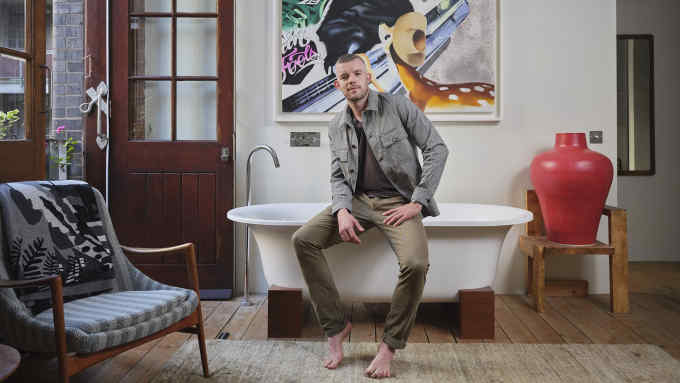