As London’s art fair season kicks off this week, with the trailblazing Frieze at its centre, the cultural events sector looks to be in rude health. As well as the tents of Frieze London and Frieze Masters in Regent’s Park, there are several other fairs in town, including the 1-54 contemporary African art showing at Somerset House, the Sunday Art Fair for emerging art in the University of Westminster and the urban art fair, Moniker, now located in the Chelsea Sorting Office.

But there is a cooler wind blowing through the art fair scene globally. So-called “fairtigue” has long been an issue — there are now an estimated 300 “established, international” art fairs per year, up from about 50 in 2000, according to the art economist Clare McAndrew. Collectors don’t want to be everywhere all the time, plus have day jobs to do so that they can buy more art. At the same time, gallerists and other intermediaries intensely feel the financial strains of flying, showing and entertaining around the world.

While it might feel as if new fairs are popping up all around the world, the reality is more one of consolidation and cancellation. In the past few months alone, Independent has stopped its Brussels edition after three showings; Art SG — a fair for Singapore that was originally due to launch with investment from MCH Group until the Swiss company withdrew from its regional fairs last year — has yet to host its first edition (it has been postponed from 2019 to 2020). New York’s AIPAD photography fair, which has been running since 1979, has essentially folded into the Paris Photo brand, which will now launch in Manhattan.

External threats to the traditional art fair model have also begun to emerge. Not least are valid environmental concerns in an increasingly aware industry. Organisers of art fairs and other short-term events are rushing to make their showings as plastic-free and upcycled as possible, but there is very little that can be done about the number of people and artworks that have to fly around the world to make an art fair happen.

Galleries have also begun to take more control of their virtual spaces, including many launching so-called online viewing rooms. They offer time-based shows that may ride on the coattails of major art fairs but can very effectively target collectors who aren’t there. Sites that host galleries’ art, notably Artsy, have also helped some smaller businesses to keep the home fires burning while reaching out beyond.

In the knowledge that art lovers still prefer in-real-life to virtual experiences, the galleries that aren’t under financial strain are also making huge investments back into their own spaces. New mega buildings by equally mega galleries have sprung up in London and, more recently, New York. Representatives of Pace Gallery, which in September opened a 75,000 sq ft headquarters in New York’s Chelsea, talk of a “campus” model or “art centre”. Several new gallery buildings now offer spaces for performance work, talks, cafés and even libraries, potentially vying with art fairs all year round. Hauser & Wirth’s highly experiential models (including hotels and restaurants) in Somerset and, come 2020, Menorca, might seem a much nicer way for a wealthy collector to spend their time.

Fairs don’t need to be all things to all audiences. They need to differentiate with a strong point of view rooted in a local context

In reality, though, “art fairs are the biggest threat to art fairs,” says Sam Orlofsky, director at Gagosian gallery, which this week brings a solo booth of Sterling Ruby to Frieze London and of Cy Twombly to Frieze Masters.

“Galleries aren’t in competition with fairs, our booths are an extension of what we do. But if people are physically fatigued and attendance is down, then we have to think about other experiences that we can provide,” he says.

Alex Logsdail, executive director of Lisson Gallery, is of a similar mind. “Each big-league fair is trying to outdo every other one, with extracurricular talks, performances and 200-plus gallery booths. It’s impossible to take all that in, in a matter of days.”

Cities such as London and New York also contribute their own additional distractions, with auctions, gallery shows, talks and parties that cluster in an art fair week. Logsdail’s solution is to present more focused booths — this year Lisson brings a solo showing of Susan Hiller to Frieze Masters and a pairing of Joyce Pensato and Stanley Whitney to Frieze London. “The more noise there is, the harder it is for people to look at things, therefore you have to make it easier,” Logsdail says.

This certainly improves a visitor experience, but it can be a highly risky strategy for a smaller gallery, which might not hit the right note with the artist they choose and therefore fail to make ends meet.

Elizabeth Dee, who founded Independent in New York in 2010, and its Brussels edition in 2016, partly as a reaction to what she describes as “football-pitch” events, says that the fairs themselves also have to be more focused, to help their exhibitors hit the right collectors.

“Fairs don’t need to be all things to all audiences. They need to differentiate with a strong point of view that is rooted to their local context,” she says. Dee recently closed her Harlem gallery as well as making the decision to pull her fair out of Brussels, in part to focus energy on her New York fair.

Frieze director Victoria Siddall would seem to be going in the opposite direction. She acknowledges that “there are too many art fairs in the world” yet opened Frieze’s fourth outlet in Los Angeles this year. But, she says, this is part of a mission to keep each event distinct. The smaller, more locally rooted Frieze LA reflects the city’s market. In the same vein, “Frieze in London, with 35 countries represented, reflects London. It’s a meeting point for the whole world,” Siddall says. She says that VIP visitor numbers aren’t falling, it’s more that “the art world is bigger, so there’s no longer one event that every VIP goes to. So you need to build new visitors rather than all chase the same ones.”

Dee also converts the challenges to opportunities. “There are more galleries in the world than there have ever been before and the ways of reaching collectors keep evolving. There’s an appetite for change and to work out what is best for the artists. There’s never been a more exciting time to be in this sector.” 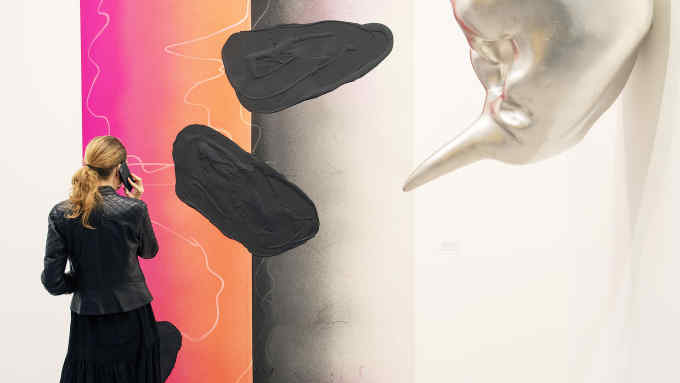