The one thing that I know keeps you up at night is inheritance tax (IHT). You spend hours thinking about how you might avoid it. I wish you wouldn’t worry so much.

The effective allowance is now £1m. You can give money away out of surplus income tax free until you die. Any capital you give away seven years before your death is IHT free. Any other gifts are tapered. And your pension assets won’t usually be liable for IHT at all.

So all in, most of you are going to be able to hand on an awful lot of cash to your kids before you are bothered by IHT. That said, someone’s paying: HM Revenue & Customs collected a record £5.2bn in IHT in the last tax year.

With that in mind, I am going to humour you with some good news. There is a way to shift a pile of your cash slowly into a vehicle that could that have the effect of making it 100 per cent safe from IHT if you live for a long time — and that comes with the added bonus of paying out a sum large enough to cover your IHT bill if you die in the short term. It is life insurance.

The general idea is this. You pay an insurer a hefty premium every year. You fill in a form for it to be written in trust with your heirs as your beneficiaries. On your death, the insurance company pays those beneficiaries a large lump sum which, as it is in trust, comes tax free.

If you die early they’ll get back way more than you paid in. If you get a normal lifespan, they won’t get quite as much more. But they will make a return — and from the point of view of an IHT worrier, even getting back less than you have paid in is fine as long as the final sum paid is greater than the post-IHT sum would have been.

Sounds good doesn’t it? It could be. Let’s look at one policy in particular, the whole of life plan from PruProtect. I’m not picking on anyone here; this example just happened to be sent in by a reader.

A 44-year-old is looking at cover of just over £1.2m. The premiums start at just over £5,000 and rise by 2.5 per cent plus RPI every year (although you can get discounts on that in exchange for good health behaviour). When you get to 80, the premium rises faster — 5 per cent a year plus RPI. This, the firm says, is to “reflect your increasing age” by which they mean the fast rising likelihood of your imminent death and the end of the stream of premiums.

News in-depthTax
Is it time to reform inheritance tax? 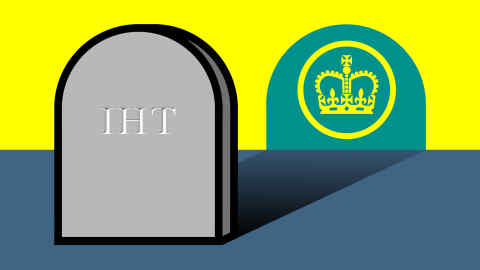 The payout rises at a lower rate over the period: RPI up to a maximum of 10 per cent a year or a total value of £20m. That doesn’t change when you get to 80. One complicated spreadsheet later and I can tell you that if you get a similar policy, manage to hang on to the silver vitality status discounts by allowing the Pru to snoop on your exercise schedule (12.5 per cent every five years) and die at 80 (unlucky after all that exercise) your real return on the premiums you have invested in the deal will have been 7.8 per cent a year.

Most people will fall somewhere in the middle. You might manage to keep up the exercise until you are 75 but not many 90-year-olds are still doing much in the way of vitality activities.

This looks good. The average person still dies somewhere in their 80s and the expected returns from stock markets over the next 25 years or so aren’t particularly high given where valuations are at the moment (Schroders forecasts the UK to return 3.7 per cent a year between now and 2045, for example).

And even if you look at past returns, 7.8 per cent is pretty damn good (the long- term return from the US market is 6-7 per cent). On the face of it then, the return here is fabulous — inflation linked, guaranteed and, crucially, high. Thank you the Pru.

So why am I not 100 per cent convinced this is the way to avoid IHT? It’s all about the premiums and the extent to which you are going to be able to keep paying them.

You will say that nominal is meaningless and you are, of course, correct. But think about the older people you know. Does nominal seem meaningless to them?

The point is that there is a very high risk that a lot of people who take out these whole of life insurance plans will one day find that paying the premiums is just too much, particularly when their nursing home bills arrive.

They will stop paying them. And then they will get nothing from their insurance plans. Not a single penny back. Rien du tout. There is perfect clarity on this in the blurb. “If you cancel your plan after 30 days, we won’t refund your premiums and there is no cash-in value.” Just cancel your direct debit, says the Pru, and that is that.

This is not the only risk inherent in rising longevity. The longer you live, the lower your average annual returns (you might spend your 110s wishing you’d just got a tracker) and, possibly worse, the higher the chances of legislative change. IHT could be abolished. It could start to be charged on trusts and doubled. Or it could be swapped for a tax on the recipient of all funds, as suggested in past columns here and by the Resolution Foundation earlier this week.

If any of these things happen you are going to feel very foolish at locking yourself into a lifetime product that turns out not to be the solution to the problem you thought you had. Which, by the way, is probably why the Pru’s brochure doesn’t mention IHT avoidance as a selling point. That is left to the independent financial advisers.

So your question on this has to be: is this return attractive enough to take the risk that you live into the low return age (over 90); that you find the premiums unaffordable and stop paying them; or that, at some point over the next 40 years, the rules change?

Given the fact that a 44-year-old today is going to be the beneficiary of medical treatment beyond his or her wildest dreams, that she isn’t going to have a steady pension income and that discussions around IHT reform never seem to end, I’m not sure I would bet on any of those things.

A better approach? If you have a large amount of assets (so large that IHT keeps you awake) and you can afford to pay premiums on the scale I suggest above, note that you can also afford to give away the same amount of money every month. Why not just do that instead? Then, if you stop paying at least it is your kids who are going to keep the money — not the insurance company.