Get the newsletter now
Airbus SE

Airbus slashes 15,000 jobs as sector reels from collapse in travel

Peggy Hollinger in London, David Keohane in Paris and Claire Bushey in Chicago

Airbus is slashing 15,000 jobs, marking the biggest single reduction in its passenger jet business since the creation of Europe’s flagship aircraft maker 20 years ago.

The cuts, forced by the collapse in air travel as a result of the coronavirus pandemic, come as Guillaume Faury, chief executive, warned that he did not expect air traffic to recover to 2019 levels before 2023 and potentially as late as 2025.

The job cuts account for roughly 17 per cent of the group’s 90,000-strong commercial aerospace workforce and have been carefully calibrated to avoid rivalry between unions in France and Germany.

Roughly 5,000 jobs will go in each country, with a further 1,700 in the UK, 900 in Spain and the rest worldwide. The reduction was expected to be complete by next summer, the group said.

“Airbus is facing the gravest crisis this industry has ever experienced,” said Guillaume Faury, Airbus chief executive. “The measures we have taken so far have enabled us to absorb the initial shock of this global pandemic. Now, we must ensure that we can sustain our enterprise and emerge from the crisis as a healthy, global aerospace leader.”

However, the cuts, just weeks after Paris unveiled a €15bn rescue package for the aerospace and aviation industries, were immediately criticised by both the French government and unions. They were “excessive”, said the French finance ministry. Force Ouvrière, the main Airbus union, said the number of job cuts was “unacceptable” and it would reject any attempt to impose compulsory redundancies.

The job losses, 50 per cent higher than the 10,000 imposed in 2007 under a swingeing restructuring code-named Power8, highlight the scale of the challenge facing the global aerospace and aviation industries in the wake of the coronavirus pandemic.

Many analysts forecast no return to 2019 levels of demand before 2022 at the earliest, while some equally predict the aviation industry could be up to 50 per cent smaller in the near future.

Rob Stallard, aerospace analyst at Vertical Research, said: “There’s still more uncertainty in aviation than is perhaps reflected in the equity market at the moment, but unfortunately Airbus really has no choice but to take these steps on staffing.”

Mr Faury expressed hope that some of the planned job cuts could be mitigated by an extension of furlough schemes that would allow the group to retain crucial skills for a return to growth. France and Germany had indicated they might extend subsidies for part-time working for up to two years, he suggested. The workers on furlough would be “rotated so people stay current”, he said. “Nobody is happy with 15,000 [job cuts]. How can you be?”

But in a sign of the continuing pressure on the industry, Air Canada said on Tuesday it was suspending service on 30 domestic regional routes and planned to close eight stations at regional airports.

The curtailment of services comes after the Canadian carrier said in May that it would cut 20,000 workers, more than half its 38,000-strong workforce.

The Montreal company has already reduced capacity by 85 per cent compared with the second quarter of last year. It said it expected third-quarter capacity to equal about 75 per cent of 2019’s third quarter.

“Air Canada expects the industry’s recovery will take a minimum of three years,” the company said. “As a consequence, other changes to its network and schedule, as well as further service suspensions, will be considered over the coming weeks.”

Meanwhile Air France is aiming to cut about 7,500 jobs as the airline struggles to cope with the economic effects of coronavirus.

Travel
Frequent flyer: when will we fly again? 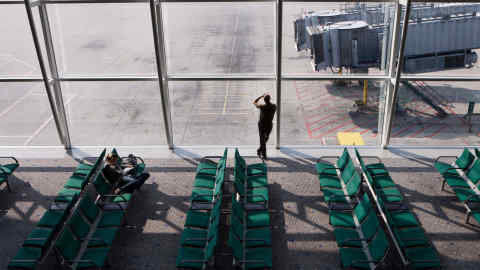 The airline, which makes up half of the Franco-Dutch Air France-KLM group, will aim to cut 6,500 jobs from Air France and another 1,000 jobs from its regional airline Hop by the end of 2022. Crunch talks with unions on the cuts are due to start on Friday.

The news was first reported by Agence France-Presse and confirmed by people familiar with the matter.

In April, Airbus and Boeing slashed production rates as customers cancelled and deferred orders. Airbus cut output of its popular A320 single-aisle aircraft by a third and made deeper cuts of 40 per cent and more to its A350 and A330 widebody aircraft.

Boeing reduced production rates by similar levels and announced it would cut about 10 per cent of its 160,000-strong global workforce.

Those production cuts triggered a cascade of rationalisations at suppliers such as Rolls-Royce, General Electric and Safran. Industry executives expect further cuts to spiral down through the global supply chain in the second half as smaller suppliers face a crippling cash squeeze.

Airbus, which employs 135,000 people worldwide in aerospace and defence, said it would begin consultations with unions on the job cuts. It would not rule out compulsory redundancies but said it hoped to limit the impact by “relying on all available social measures, including voluntary departures, early retirement, and long-term partial unemployment schemes where appropriate”.

Get alerts on Airbus SE when a new story is published