How can shopping centres recover from the pandemic?

Halloween at shopping centres across the UK normally means spooky pumpkins, trick or treat trails, and plastic spiders. But this year, there were bigger fears: Intu, Britain’s largest shopping centre owner, has collapsed into administration, leaving the fate of some sites uncertain, while rival Hammerson is trying to turn itself round after scrambling to raise cash through a rights issue and asset sale. Valuations in the sector have tumbled.

The picture is similar across Europe and the US, where the coronavirus pandemic has exacerbated the woes of a sector already crippled by the rise of online shopping, steep rents for retailers, and high debt levels.

Analysts estimate that lockdowns and social distancing rules have accelerated these trends by between three to five years, with the US and the UK a step ahead of European mainland countries. As the crisis turns yesterday’s fears into today’s reality, is there a way back for shopping centres and their landlords?

One idea that is often proposed is the “mixed-use” site, where a large part of a centre’s retail space is redeveloped into flats, offices and “experiential” spaces such as gyms and restaurants.

Even if the shopping centre is only half occupied, you’re obviously going to have to buy out the other retailers, and then you’ve got the demolition costs, then the construction costs

But the reality is not so simple for those already saddled with bricks and mortar. “Even if the shopping centre is only half occupied, you’re obviously going to have to buy out the other retailers, and then you’ve got the demolition costs, then the construction costs,” says Stephen Springham, head of retail research at estate agency Knight Frank.

“There is a massive gap between retail values and other uses like accommodation, even though retail is being pulled through the mud at the moment. That doesn’t mean it can’t happen, but it’s not a quick win.”

In the UK, he adds, this approach is particularly difficult for regional shopping centres, as values tend to align between residential and retail only within London; elsewhere, conversion to residential use is more likely to entail financial loss. Their likeliest buyers are local councils or housing associations, rather than for-profit organisations.

Last month, for example, Sovereign Housing Association bought a shopping centre and car park in Bristol that it says may have potential for retail and residential use, including affordable homes for those on low incomes.

Mark Bourgeois, managing director of Hammerson in the UK and Ireland, says that alongside mixed-use space, the property company is also considering turning large car parks and basements into distribution centres that will become part of “last mile” delivery for online retailers.

But some property experts say such schemes are unlikely to solve landlords’ financial woes or to be welcomed by councils looking to reduce traffic congestion. “The value of those shopping centres is still higher than them as a warehouse, in terms of capital value per sq ft,” says Tony Christie, head of retail and asset management at property investment manager APAM.

“Secondly it means you’ve got a lot of big lorries driving into the centre of town, it’s unlikely you’d get planning permission. And from a cost point of view, having big vehicles get stuck in traffic is an expensive way of doing things for retailers, it’s better to have the warehouses on the periphery,” he adds. 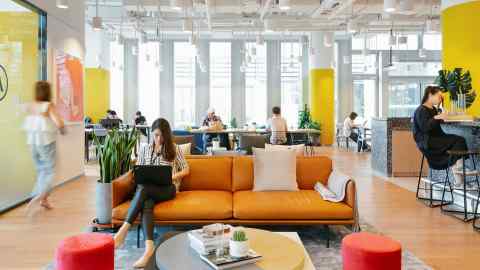 The difficulty with reinventing shopping centre sites is that it takes time and lots of money — neither of which landlords may be able to obtain from lenders already frustrated by the sector’s plummeting values.

Digital tools and artificial intelligence may offer more immediate sources of new revenue. In a report last year, analysts at the Deloitte Center for Financial Services in the US suggested that landlords could sell data about people’s movements in shopping centres to advertisers or urban planners. Similarly, data about visitors’ shopping behaviour could be sold to institutions investing in consumer companies, or back to the retailers themselves.

While this would initially be only a peripheral income stream, over time it could become more significant. As data usage becomes ever more sophisticated and pervasive, landlords who can offer such services to their tenants may be able to achieve higher rents.

Rather than traditional rental models where landlords negotiate long-term contracts with retailers who are then left to run their shops, a more collaborative relationship is required by the precarious pandemic-era environment and the demand for more “experiential” shopping to compete with e-commerce.

“Landlords need to work more in partnership with retailers so they can offer services to improve the shopping experience, because as retail becomes more operationally intensive it demands greater operational expertise,” Mr Urwin says.

Sharing visitor data, for example, could help retailers make more sales, reducing the likelihood of them going bust and — as in Deloitte’s scenario — improving returns for landlords.

Leases will also need to be more flexible, and rental payments that are tied to a shop’s turnover will become more common, Mr Urwin adds. This in turn will give investors and landlords an incentive to play a more active role in driving traffic to shops.

“To date many investors have been incentivised to get long leases and a commitment from occupiers to pay. . . But the nature of leases is changing, and it brings closer alignment,” he says. “Where you have turnover leases in place there’s a completely different relationship between the outlet operator and the tenant, they both are incentivised to increase footfall.”

But Mr Springham points out that there is a painful truth behind all these ideas. “We’re seeing values go down by about 25 per cent,” he says. “The reality that we can’t really escape here is that those values were artificial relative to reality and this is basically a massive correction that was overdue.”

Explore the Special Report
READ MORERisk Management: Property
How can shopping centres recover from the pandemic? 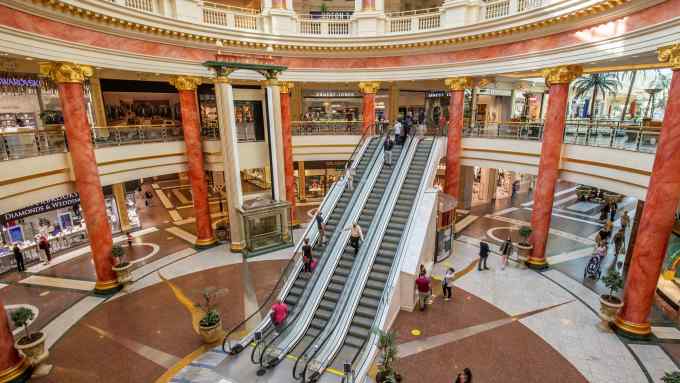