Young lawyers feel most at risk from burnout

Soaring demand for legal services has led to a mental health crisis among lawyers and a boom in wellness schemes offered by law firms.

But campaigners say such policies are “sticking plasters” designed to cover a legal sector obsession with “presenteeism” and working long hours.

Lawyers are busier than ever, thanks to a record-breaking period for deals on the one hand and crisis-hit clients seeking advice on the other.

Private equity firms experienced their busiest six months ever in the first half of the year, putting further demands on corporate lawyers already under strain due to the pandemic.

“The law industry has a horrible culture,” one lawyer told consultancy RSGi in a recent survey. “Firms talk about wellbeing but as soon as a client demands something all pretences of caring about employees go out of the window. No firm feels able to say no because another firm will say yes.”

According to a recent report by LawCare — a legal mental health charity — a majority of the lawyers it surveyed in the UK said they had experienced mental ill-health, either clinically or self diagnosed, in the 12 months to early 2021. Conditions reported included low mood, anxiety and depression.

The most affected were younger lawyers, who often have less space to work in at home and feel less financial and job security compared with more senior colleagues. According to LawCare, those aged between 26 and 35 displayed the highest burnout scores, and they also reported the lowest autonomy and highest work intensity scores.

Firms have tried to fix this by hiring “burnout advisers”, such as Charlène Gisèle, a former Jones Day associate turned executive coach. Gisèle, who suffered stress symptoms herself, says there is a “burnout crisis” among lawyers: “[They] are social animals and one thing that alleviates the anxiety that comes with working long hours is the camaraderie.” The loss of face-to-face teamwork during the pandemic and the onset of “Zoom fatigue”, is a particular concern.

Gisèle creates programmes for lawyers that aim to improve their physical and mental health, including their relationship with work. Such schemes are increasingly common among law firms, many of which are hiring external companies and consultants to run sessions and training.

Herbert Smith Freehills has set up mental health “huddles” led by an external consultant in some of its practice groups. The firm has also trained 500 volunteers from across the organisation to support colleagues, and confidential conversations are on offer.

According to LawCare, the programmes that make the most difference to lawyers are those that focus on face-to-face meetings and support from managers. The charity found that regular catch-ups or appraisals were the most helpful kind of support, emphasising the importance of a face-to-face connection in improving mental health. 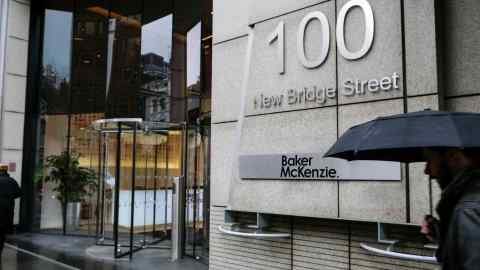 Two aspects of the job responsible for putting lawyers under particular pressure, says the charity, are having every moment monitored via billable hours and a firm culture in which lawyers are expected to be present or available around the clock.

Elizabeth Rimmer, the chief executive at LawCare, notes that legal practices are increasingly introducing wellbeing support, including mental health apps and champions. However, she adds: “Although these may have some benefit, they are in effect putting a sticking plaster over a bigger problem, the accepted working practices in law that undermine mental wellbeing.

I see a number of partners who came to me after cardiovascular issues, strokes, metabolic diseases and early Alzheimer’s

“We know from our Life in the Law research that the most valued wellbeing support in the workplace is regular catch-ups . . . time with managers or supervisors to talk through how matters are progressing and flag concerns.”

Gisèle warns that offering a gym membership, lunchtime yoga and healthy food in the canteen “just isn’t enough”. For her, “the biggest issue is the ‘work hard’ versus ‘work smart’ issue. It’s the culture of working long hours as a gold medal of stellar performance as opposed to being efficient, and getting out the door.” The “face-time” culture needs to be addressed from the top and the bottom.

“I see a number of partners who came to me after cardiovascular issues, strokes, metabolic diseases and early Alzheimer’s. This is serious, and it’s not just one firm to blame,” she says. Fixing the culture will take years “and a legal revolution”.

Some firms are now using wellness initiatives as a competitive advantage or a selling point to recruits, amid a talent war has seen retention and sign-on bonuses hit $250,000 at US firm Kirkland & Ellis — with a knock-on effect elsewhere. Soaring demand for legal advice in areas such as restructuring and mergers and acquisitions has created a need for more people — but just as burnout is causing attrition, especially among junior employees.

Legal services
US law firms offer bonuses of up to $250,000 in battle for staff Gisèle says: “The first problem is burnout and talent retention. I get re-referrals from recruiters who are either sending me burnt-out lawyers, [or] wanting to know which firms offer the best wellness packages,” she says.

According to Rimmer, law firms must address the problems of long hours and insufficient support in order to stop making their lawyers ill.

The people in a legal practice are one of its greatest assets, she says. If they really want to address the issue of mental wellbeing, they “should focus on investing time and resources in training and supporting leaders to manage, and give them the time and space to do this well”.