Why Harvard’s case studies are under fire

Students love the classroom buzz and collaborative approach, but critics are circling

In the basement of Harvard Business School’s Aldrich building at 9am, 90 chattering first-year MBA students file into a semi-circular amphitheatre and take their pre-assigned places, marked by name cards. They are about to participate in the Finance 1 course, one of their first experiences of the institution’s signature approach to teaching and research.

Each student lays out in front of them a case: a stapled booklet containing a dozen or more pages of text interspersed with data. Many have scribbled and highlighted sections on the paper, symbols of their debates and calculations from the “learning teams” in which they prepare for classes in small groups.

During two years of study, the typical student will analyse and discuss 500 cases: a pedagogical approach that has achieved near-religious status at Harvard and proved highly lucrative with sales to hundreds of business schools around the world. But case studies are now being written in varied ways, or rejected outright by rivals as business education trends shift.

After some brief banter, Chris Malloy, a finance professor, makes the first of many unsolicited “cold calls” to question a student picked at random on the case they are studying, called “Ocean Carriers” about leasing and cash flow, designed to spark discussion on whether a company should commission a new cargo ship.

Over the next 80 minutes, he paces up and down the aisles, energetically teasing out contributions from students in the room. Their comments are noted down by a “scribe” since they will account for half of their course grade. Their views differ but the mood is collegiate, with comments sparking periodic applause from peers, laughter or three sharp knocks on desks if they speak too quietly.

“I used to lecture when I was at the London Business School,” says Prof Malloy afterwards. “But you don’t get the same interaction or engagement from students as you do with the case method.”

For the past century, since shortly after Wallace Donham was appointed dean in 1919, the business school has adopted the case method as its dominant approach to teaching. It was pioneered 50 years earlier at Donham’s own alma mater, Harvard Law School, to analyse judicial decisions.

In contrast to lectures, in which the professor delivers to a silent auditorium, cases require students to prepare in advance, studying the range of information provided and putting themselves in the position of the protagonist — normally a senior corporate executive. They then debate their decision in class while the teacher — in the Socratic tradition — acts primarily as facilitator.

Advocates say the method forces students to master the material, trains them in making decisions and defending them to a group, focuses on practical examples, allows them to share their own work experience and ensures they retain the lessons learnt — in part by making the approach entertaining.

“There is something magical about the buzz in the classroom,” says Jan Rivkin, senior associate dean. “It’s tremendously rewarding. You can see the lightbulb go on and know when they are getting it right, which is very hard in lectures.”

Not everyone is convinced. The largest share of Harvard’s cases are dominated by US examples. Critics say women leaders are insufficiently represented, and some themes, sectors and perspectives — including those of labour unions — are played down.

Yubo Chen, associate dean of Tsinghua University’s School of Economics and Management in Beijing, says the different demands of his students explains why his school is one of a growing number in Asia writing their own — often shorter, more practical — teaching cases. “Our students are not satisfied with Harvard cases,” he says. “The environment is changing so fast, and we need cases on China. It’s very difficult to talk, say, about Amazon. They want to know about ecommerce in China.”

Some raise more fundamental questions about the case method. It requires not only good cases but also skilful teaching, without which class discussions can be flat.

Steven Shugin, professor in marketing at the University of Florida’s College of Business Administration, argues that the scientific method — of rigorously testing theories — in business schools should displace both the writing and Socratic-style teaching of cases, which are typically based on historic events in a single company.

“I’m not saying the case has no value but it is not generalisable,” he says. “So many cases highlighted the best companies of the 1980s like Kodak, which had gone out of business by the 1990s.” A series of Harvard cases of “innovative” Enron financial transactions have since been superseded by ones on the ethics raised by its collapse.

He says case teaching is popular with students, who consequently rank their professors highly in satisfaction surveys, because it is entertaining but diverts research from studying and developing more robust theories that should be more widely taught. 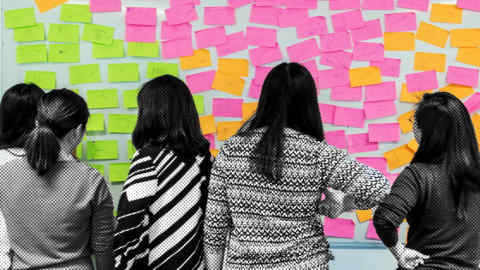 “Teaching should keep students up with current thinking,” he says. “Cases may teach presentation skills, but they should be taught those in communications classes, not in finance and marketing courses.”

A few minutes away from Harvard at the Massachusetts Institute of Technology’s Sloan School, Maura Herson, assistant dean for the MBA programme, says less than half of its core courses are taught using cases.

She stresses the growing role of simulations, the use of mentors and consultancy projects working with real local companies rather than case studies on paper. She says case studies are less useful for technical skills in ever higher demand, such as artificial intelligence.

Just as Yale has long been Harvard’s academic rival, so its School of Management has developed a different approach to cases. Jaan Elias, director of its case research centre who previously worked at Harvard, contrasts to his former employer’s self-contained, relatively short “cooked” cases “in which faculty know every point and comma” with Yale’s longer “raw” ones.

It has produced some 150 such open-ended cases, which include links to articles and videos online to encourage “multiple perspectives” designed to mimic the vast quantity of information in the modern world. They are used in multiple courses, though some say they are not easily taught by professors other than the original author.

Different Yale faculty members spurn case teaching altogether. Prof Paul Bracken, who teaches leadership using scenario-planning, says: “Cases are about the past, when you already know the answers. Scenarios are about role playing the future. We have far fewer people asking which choices are the right decisions. That’s leadership.”

Prof Rivkin says that Harvard too now offers simulations and “immersion” placements to complement cases, which have evolved in theme, content and style, including online versions and even a “Manga” version.

But he stresses: “We are trying to produce general managers, not students with the deepest technical knowledge in narrow functional areas. For the best financial services training you’d go to Wharton, for technology to Sloan or to Kellogg for marketing.

“It’s incumbent on critics of the case method to suggest a better alternative,” he says. The school produces some 350 new cases annually to add to a stock of about 7,500. Last year, it sold about 15m copies globally mostly to business schools, from 11.5m in 2013. Cases contributed much of the $221m in its publishing division’s revenue in 2017, which generate more than a quarter of the school’s total income.

At least measured by the top line, Harvard’s model is far from waning.