Davos 2016: Global economy seen to be hanging in the balance

Jump to comments sectionPrint this page
US updates

Sign up to myFT Daily Digest to be the first to know about US news.

The world economy is precariously balanced between continued recovery and a third leg of the global financial crisis, according to leading economists attending the World Economic Forum in Davos.

The sharply contrasting outcomes highlight the uncertainties surrounding the global outlook in 2016 amid fears of a slowdown in China, plunging commodity prices and high levels of corporate US dollar-denominated debt in emerging economies.

Economists said the instability threatens to exacerbate the vulnerability of households and companies, which are already responding to disruptive technological changes.

The dilemma facing economists was demonstrated in the International Monetary Fund’s latest update to its World Economic Outlook. While its central forecast is relatively optimistic, with growth expected to pick up modestly in 2016 and 2017, it also reduced its growth forecasts and acknowledged severe downside risks.

Maurice Obstfeld, IMF chief economist, said financial markets, rocked by volatility since the beginning of the year, were “overreacting” but also acknowledged “there was a difficult adjustment ahead in emerging markets”.

Some of the big name economists in the Swiss Alps this week are notably pessimistic, thinking this adjustment will be more difficult than the IMF central forecast expects.

Noting “the third leg of the debt supercycle does seem to be upon us”, Professor Kenneth Rogoff of Harvard said: “Anyone who is still telling the ‘this time is different’ story for China has their head in the sand”.

Richard Baldwin, professor of international economics, at the Graduate Institute, Geneva, said: “There are a number of vulnerabilities that individually would suggest problems and slowdowns, not a crisis with a capital ‘C’. But these vulnerabilities could merge into new Crisis”.

According to Nobel laureate Professor Michael Spence of the Stern School of Business at New York University, “it is a fragile and deteriorating situation globally, with little in the way of effective counter-measures”. 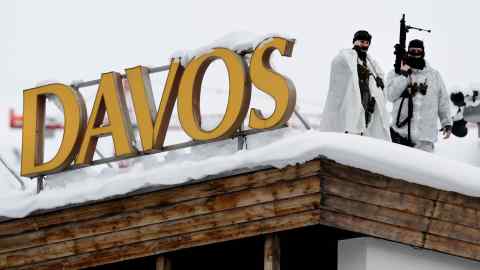 While recognising the possibility of something worse, an equal sized group of economists take comfort from the still-healthy rate of Chinese growth. Expecting a further slowdown in the Chinese rate of expansion, Paul Sheard, chief economist of Standard & Poor’s, the ratings agency, said an outcome of 6.3 per cent Chinese growth this year would still be positive.

Professor Bob Shiller of Yale University, also a Nobel laureate, warned that the recent falls in financial markets had special significance. “There is more than the usual salience to this event and …a substantial risk of further such drops,” he said.

“Let’s not get carried away here — 6.3 per cent real GDP growth this year is the equivalent of about 14 per cent growth in 2009, in terms of the size of the increment to global GDP,” said Mr Sheard.

However, what has hitherto largely gone unnoticed in this debate is that digitisation will also wipe out jobs in emerging markets countries such as China and India. And UBS’s economists argue that this displacement could be more — not less — intense in the developing world since their economies rely more heavily on low-skilled work that can most easily be replicated by robots.

Another Nobel laureate, Professor Christopher Pissarides of the London School of Economics, said the fact that US interest rate rises had been telegraphed for so long should help. Meanwhile, China “is still growing reasonably well and the government seems prepared to help the readjustment to the slower growth rate”.

Professor Ian Goldin of Oxford university, noted another reason not to expect a worldwide slide back into recession. “The world economy is now much more resilient than was the case in past decades, due to the number of growth engines. India is picking up, as China slows, and both continue to grow at rates which are unprecedented in the advanced economies,” he said.

If the big picture for the global economy is teetering uncomfortably between divergent outcomes, households and companies are also struggling with the possibility of even faster technological change.

Professor Ned Phelps of Columbia University and another Nobel Prize winner, said: “Fears that new technologies may further upset advanced economies seem not yet to threaten business confidence, but they are a cause for worry”.

Prof Baldwin said the most likely improvements in cost and productivity would come from “cheap, educated developing nations workers [that] can seem to be sitting right next to you in London and New York while actually being in their own nation”.

Most of the economists attending the forum said they thought there was a risk advanced societies would struggle to adapt sufficiently quickly to rapidly advancing technology, although this was less of an immediate concern.

“Equally serious is the possibility that the newly arriving technologies will do nothing to kindle growth of productivity and revive enthusiasm for enterprise,” Prof Phelps said.