Jonathan Saunders: ‘Whatever you do, do it to the nth degree’

My personal style signifier is a pair of white Reebok classic sneakers, which have been a constant for me for the past 20-odd years. It’s very Glaswegian of me. They cross the line between art student and raver, so they have been a good staple. I also always wear a necklace by Australian jewellery designer Jordan Askill. It’s got a pendant in the shape of a head, and inside there’s a moonstone, which is something that a close friend of mine, [the late designer] Richard Nicoll, used to wear, so it’s very personal to our group of friends.

The first piece of clothing I ever bought myself was a T-shirt with Garfield on it that said, “Why not?” in a speech bubble on the front. I got it from a car-boot sale, for 20 pence, and I thought I was the coolest kid in Glasgow.

I’ve recently rediscovered screen printing, which is something I specialised in during my degree at The Glasgow School of Art, but it had been a long time since I physically printed fabrics myself. In 2020, I turned my dining table into a screen-printing table and made do with the materials I had. I was washing out my screens in my shower, there was paint everywhere and it was extremely messy and destructive, but it was just wonderful to make things with my hands again.

The best book I’ve read in the past year is Shuggie Bain. It’s a Glaswegian story and it’s in a colloquial style, so it took me back to my hometown. As well as being a really interesting story, it brought back a lot of memories for me.

My earliest fashion memory is watching Kurt Cobain perform on MTV Unplugged in 1993 – I remember obsessing over his cardigan when I was a kid, searching thrift stores for something similar.

When I need to feel inspired, I go dancing. Often, like a lot of designers, I get stuck in my head about which direction to go in. But I’ve found that when I’m out with my friends dancing, it’s a good way to relax and let the ideas come through. There’s a club night in New York run by a musical duo called The Carry Nation that attracts a group of cool kids and misfits, who probably think I’m way too old to be there, but I don’t care. It’s super-expressive, the music is incredible and I find the people inspiring. It reminds me of when I discovered dance music in the ’90s, when I worked for a nightclub called the Sub Club in Glasgow.

The last things I bought and loved were two books, one on ’90s New York flyers and the other on London rave flyers, from Donlon Books on Broadway Market in London. The shop is owned by Conor Donlon, who was at Central Saint Martins a few years ahead of me. Every time I come to London, it’s my first port of call because he has a lot of first editions and books that he’s sourced from Japan.

And on my wishlist is bedding from the Magniberg collaboration I’ve been working on. I really wanted to use print as a medium, which is something that’s true to my heart because I started my career with textiles. I looked at music for inspiration, and that moment in time of Peter Saville, Pet Shop Boys and New Wave artwork. The designs take very traditional bedlinen, working with semi-kitsch, Victorian-style florals, but seeing them through an acid-house lens. Duvets, from €226 for a single, magniberg.com

A recent “find” is a bookshop in London called Marcus Campbell Art Books beside the Tate Modern. It has catalogues from exhibitions from 1900 to the present day, which are from as little as £1 each, as well as rare books and lithograph-printed posters. I could spend hours there.

The last meal that truly impressed me was at The Four Horsemen, a restaurant and wine bar in my neighbourhood in Williamsburg and part-owned by James Murphy from LCD Soundsystem. It has the most wonderful food. It’s loosely Italian, but it’s simple but creative cooking – particularly the razor clams in green garlic butter.

The tech I couldn’t do without is Google Maps, because I have the worst sense of direction. There is something wrong with my internal navigation.

My style icon is Grace Jones. What sticks in my mind is when Keith Haring painted her body, and she was just naked with white scrawlings all over. She has such longevity – even now, at 74, for her to feel current and powerful, it’s just mind-blowing.

The best gift I’ve received recently was a signet ring, from Rebus in Hatton Garden, which has my initials on it. It’s from my best friend, who I met when I was 15. I bought her one like it for one of her significant birthdays.

The last music I downloaded was by Khruangbin, a band from Texas. I was very envious of not being at Glastonbury, so I was watching some of it live, and this band looked and sounded incredible – masters of the guitar. Towards the end of their performance they started to play riffs on ’90s house tracks, done through the eyes of this alternative rock band, which I loved.

In my fridge you’ll always find leftovers, because I tend to overcook. Even when I’m on my own, I cook for six, so there’s usually dishes from several meals on the go. I’ve also always got curry leaves, and two cases of LaCroix Pamplemousse water, which I’m obsessed with. And raw dog food, for my rescue pitbull, who is named after Basil from Fawlty Towers.

The best souvenir I’ve brought home is spices from a market in Rajasthan. I love to cook, especially Indian and Sri Lankan food, because I’ve always had a passion for the culinary styles there. The flavours and fragrances of the cardamom pods and spices were completely different to what I’d been able to get in London or New York.

The last items of clothing I added to my wardrobe are a sweatshirt and tracksuit bottoms from Aries. It’s a London-based skate brand started by some friends. I love what they do. ariesarise.com

The one artist whose work I would collect if I could is Basquiat, because of how personal his work is – you get so close to how he was thinking. Because I’m used to working in a graphic, linear way, I find his use of colours and the expressive feeling in his work fascinating, because it’s a language that I wouldn’t naturally fall into. Also Keith Haring, because his work was so democratic – it was about the public and the culture of people he was around. He opened up art to everyone – from the chalk drawings on the Subway to his murals.

The grooming staple I’m never without is CeraVe, the one in the tub. It’s not expensive, but it’s the best moisturiser – I use it every day. CeraVe Moisturising Cream Pot with Ceramides for Dry to Very Dry Skin, £15 for 454g

My favourite room in my house is a toss-up. The kitchen is where I spend the most time; it’s a social layout and having people around for food is important for me – it’s how I bond with my friends and show generosity. But I also love my bedroom – my apartment occupies the corner of a 100-year-old converted factory, and from there you can see all four bridges from Brooklyn to Manhattan.

The design moment that changed everything was Bauhaus, both personally in terms of inspiration and as a movement; the bringing together of creatives, artists and designers from different fields, and the cross-fertilisation of ideas. There was so much questioning of what was beautiful, they prioritised function over form and it’s still influential today. My favourite was the Hungarian artist László Moholy-Nagy because of his work across mediums – painting, sculpture and photography.

My favourite website is Salon 94, which is a gallery; I love the curation and the artists that they represent. I enjoy looking at things that are way too expensive for me.

When I’m out with my friends dancing, it’s a good way to relax and let the ideas come through”

The best advice I’ve ever been given is that it doesn’t matter what you do, but do it to the nth degree. That was from Louise Wilson, who was my tutor at Central Saint Martins when I did my master’s in fashion design. I always felt out of place there because I didn’t come from fashion and I was intimidated by the fashion people around me. She said if you’re going to be a textile designer, do 25 screen prints and push what you know that you can physically do well. She influenced so many people and I feel very lucky to be one of them.

An indulgence I would never forgo is deep-tissue Chinese massage, which just helps my general wellbeing. I go to the gym every day, so I try to go at least once a week. There are lots of great, inexpensive places in New York – especially Renew Body Wellness, which is on 8th Street, where it’s $45 for an hour. It’s the business.

If I weren’t doing what I do, I would be a chef. I love food, and I love travel, which is what made Anthony Bourdain’s show special, because food is so closely connected with culture. And also, cooking is a little bit like showing off, which is what a designer does too.

I have a collection of first-edition art books. I particularly like lithograph-printed books, like Private View, which is an old art catalogue, and the old Comme des Garçons magazines that are numbered. I have a little library in my house in Brooklyn. Whenever I travel, I’m always overweight on my luggage, because I’ve got five or 10 new books. When I’m at home, I often go to Mast Books in the East Village.

The Aesthete
‘I courted Samantha with white truffles’: the Moro chefs talk taste 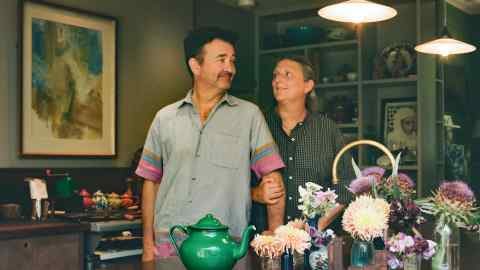 The place I can’t wait to return to is Japan, where I went on a research trip about four years ago. I visited Tokyo, Kyoto, and Naoshima and Teshima islands – the art islands – and it was one of the most life-changing trips I’ve ever done. I was in this transition period between fashion and working with furniture and interiors, and everything I saw was an influence, from the street cones, to the vintage kimono fabrics, to the art – it just blew my mind, and informed a lot of the design work I did after that.

My grooming and wellbeing guru is a Turkish barber called Altin Makas on Kingsland Road in London. I used to go there when I was a student, and I still go there every time I’m in town. They do this incredible technique where they put a flame on your ear, really old-school, and I just love it.