Sunak at odds with Johnson over speed of UK lockdown exit

Tensions have opened up between Boris Johnson and Rishi Sunak, his chancellor, over the speed at which Britain’s lockdown is lifted, amid growing Treasury alarm at the damage wreaked on the public finances by the pandemic.

Mr Sunak told Tory MPs on a conference call that he wants to open up the economy as swiftly as possible, taking aim at the “very cautious” experts on the government’s scientific advisory body, Sage.

Mr Johnson told the cabinet earlier this month the government would “advance with maximum caution” as it gradually eases the lockdown. But the chancellor told Tory MPs of his frustration that so much of the economy remained shuttered.

“Somehow Greece and Italy are opening up,” Mr Sunak told them. “This country can’t be the only place in the world where people can’t go and have a drink in the pub.”

According to one MP on the call, Mr Sunak added: “The single best way to help tourism in this country is to allow people to open up.”

Under the government’s current plans, the hospitality sector — including pubs, hotels and restaurants — will not be allowed to reopen fully until July 4 at the earliest and only if key tests on the containment of the virus are met.

One MP said: “Rishi said the scientists on Sage were very cautious and that if we believed in opening up the tourism sector we had to make the case for it.” Another MP confirmed that Mr Sunak had struck a bullish tone.

Mr Johnson faces a big decision next week on the extent to which the lockdown is eased on June 1 — the next staging post for the government as it tries to unwind the restrictions that have strangled the economy.

Ministers say that Mr Johnson, who was treated in intensive care in hospital when he caught coronavirus, is taking the cautious view. Those ministers with economic portfolios want him to put a stronger emphasis on getting the country back to work.

Under the government’s “three-step” approach to easing the lockdown, ministers are expected to give the go-ahead on June 1 to the phased reopening of “non-essential shops”. They also want to start reopening schools and restart sports and cultural events behind closed doors.

Mr Sunak’s allies confirmed the conversation with Tory MPs had taken place but said the chancellor was not “gung-ho” on opening up the economy and that it had to be done in accordance with social distancing rules.

Other Tory officials said Mr Sunak and Mr Johnson were trying to hammer out a common approach. “They aren’t very far off in terms of their thinking,” said one. “Rishi comes at things from the Treasury perspective while the PM has to look at things in the round.”

Number 10 denied any splits with the chancellor, calling them “imagined”.

The scale of the economic challenge was underlined when the UK’s public finances lurched into the red in April, leading to a record increase in the government’s borrowing and a rise in the ratio of its debt to national income to the highest level in 57 years.

Income tax
Tax: how we will pay for the pandemic measures 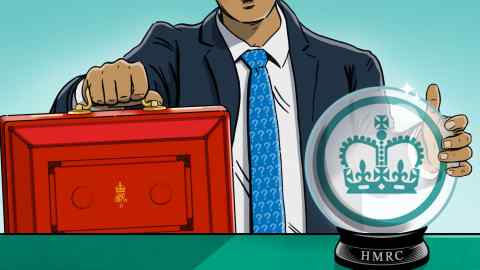 The central government net cash requirement — the amount Whitehall was in the red in cash terms — jumped to £63.5bn in April alone, a £73.3bn deterioration from a surplus of £9.8bn in April 2019. This was the largest single-month deterioration in the measure since records began in 1984.

Beis, the business department, has created a series of task forces made up of executives and trade groups to plan the next stage of business recovery, looking specifically at the next phased reopening of sectors such as retail and leisure.

On a call with business leaders on Thursday, Alok Sharma, business secretary, said there would be a new focus on economic recovery, as the government tries to bring business back to work.

The government is facing criticism from entrepreneurs such as Luke Johnson over the slow speed of the easing from lockdown.

Helen Dickinson, chief executive of the British Retail Consortium, said the sector was becoming impatient for clear guidance from Number 10. “The retail CEOs I speak to are increasingly frustrated. They are keen to open, and able to do so safely,” she said.

“But there are still necessary preparations — most notably, ensuring their teams are fully prepared and trained — which cannot be started without the go-ahead from government.”

Video: Can Boris Johnson navigate the end of lockdown?