Hedi Slimane stretched himself — and his hemlines — at Celine. Hermès quietly seduced us

The final days of menswear showed collections so arresting, you wanted to get in their pants

The sound of a thousand pens scratching across a thousand pages at breakneck speed could be heard at Sunday’s Celine show — the climax of the Spring/Summer 2020 season — as Hedi Slimane sent out a skinny boy toting a fat straw bag emblazoned with the phrase “My Own Worst Enemy”.

An admission? No, a quote from the word-based work of the artist David Kramer, as he and four others — Zach Bruder, André Butzer, Darby Milbrath and Carlos Valencia — had collaborated with Slimane on some of the clothes. But the phrase obviously stuck out. It’s an easy dismissal many have made of Slimane, who resolutely refuses to play the game of courting fashion press, or bend to demands of perpetual change, while playing the game of producing clothes exceedingly well. He also plays the game of the showman — witness the start if this show, with a Lynchian velvet curtain rising slowly from a glittering illuminated box, then sliding silently along the catwalk, unveiling a figure dressed in a crystal-crusted three-piece. Dazzling was the word, for both the outfit and the histrionics. Rocketman has nothing on Slimane.

That three-piece suit was reiterated — sans sparkle — as a new point of emphasis. Slimane cut them wide in the shoulder, with kicked-out trousers, in the mould of Bryan Ferry. That trouser silhouette dominated — for anyone who claims Slimane doesn’t change, check out the hemlines this time and last. Trousers were phenomenally high-waisted, Jagger-snug with a stretched-out rise, modelled by models hunched-over (a Notre-Dame homage? Doubt it) and barrelling down the catwalk, as if they had somewhere better to be.

Bernard Arnault seemed pleased. He photographed an outfit — a Chanel-ish, contrast-bound sequinned cardigan, with wide-brimmed hat — as it fled. And then a few more. Earlier this year, Arnault became the third-richest human on the face of the planet — one of only three worth in excess of $100bn. Here, he’s seeing his latest investment pay off. Celine has been rebranded, its stores redesigned and a menswear line added since Slimane was appointed last year. And this collection was a definitive, discernible evolution, and not just in the trouser shape. The elegance of several outfits felt new, possibly tied to Slimane’s base now being in Paris as opposed to Los Angeles. Whatever the deal, it seemed like a palpable shift — not as obvious as that between his Spring and Winter 2019 womenswear, but nevertheless evident. “I still don’t know if this is getting me anywhere,” read another Kramer quote. But it was. And indeed, it’s nice to see Slimane stretch himself, and his hemlines. It’s nice to see him feeling something new.

That said, some things stayed the same. Sexuality is bunched up with Hedi Slimane’s clothes — there is always a charge of male eroticism, a rock-star allure that, makes us all their groupies. In effect we want to get in their pants. Although, maybe, just to wear them. Ludovic de Saint Sernin is another French talent whose aesthetic is knotted up with sex — although it’s a little more blatant, as moist organza suiting in prophylactic pink tends to be. That’s an interesting selling point for de Saint Sernin — his breakthrough item (no pun) was a pair of laced-crotch leather bikini briefs which apparently have a healthy private order clientele, and he has collaborated on a sex toy with the Japanese company Tenga. The briefs appeared again for SS20, laceless and as short shorts, like garb for Robert Mapplethorpe on a fortnight’s break in the Seychelles.

This was de Saint Sernin’s first show on-schedule as part of Paris menswear week, although he diluted his message by adding in womenswear, which was mostly billowy halter-neck dresses and slithers of chiffon that came across as insubstantial, in every sense of the word. And a few pieces, honestly, didn’t fit — one poor model walked the length of the Centre Pompidou dais holding up his crystal hip-huggers which, through some kind of miscalculation, didn’t hug quite right. But technique aside, the thoughts counted and de Saint Sernin’s ideas are interesting. They feel innovative and new, if only in their degree of extremity. Everyone knows sex sells, but few put it on a plate quite like this. And fashion is embracing it — attendees included Willy Vanderperre, who photographed a campaign for the label, as well as fellow designers Rick Owens and Olivier Rousteing of Balmain. And perhaps it is someplace between these extremes — Owens’ kink, Balmain’s bling — that de Saint Sernin will find his sweet spot. There’s always next season.

Is there anything kinky going on at Hermès? The late Helmut Newton selected his whips and saddles from there, apparently, so maybe there are things we can’t fathom, but the men’s clothes created by Véronique Nichanian are quiet. Not sexless, but the furthest conceivable distance from blatant — unless you have a peccadillo for billionaires.

Nichanian is now in her 31st year helming men’s at the label and, after the death of Karl Lagerfeld, ranks as the longest-serving artistic director at a house not founded by a designer themselves. She’s lasted that long because she is quiet and low-key, like her clothes. Shown in the courtyard of the Mobilier National, where the French state stores significant furniture, bits of which we were sat on — mine was Robert Mallet-Stevens — Nichanian’s latest nodded to the setting, with moulded bags like car chassis, geometric patterns, and lots of beige. A whole sandstone spectrum, blending in to the courtyard rather than standing out. Which is kind of the point of Hermès. It’s about seduction, rather than sex. No bells, whistles or whips needed.

Explore the series
READ MORE
Loewe and Lanvin did nautical. Thom Browne was not nice 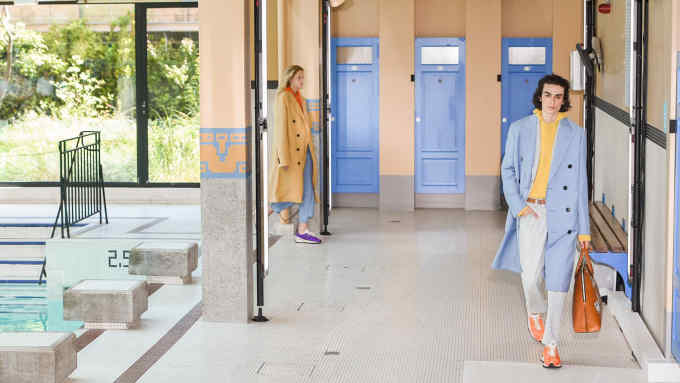