Blockchain starts transition from hype to everyday use in markets

Taking the stage at an industry conference this year, Peter Hiom, deputy chief executive at Australia’s main stock exchange, announced that his remarks would touch on blockchain — “everyone’s favourite topic” or, he joked, “the new black”.

The technology behind digital currency bitcoin has been much discussed in finance. But so far a lot of the talk falls into two categories: education — understanding what the technology is and how it might work in different areas of banking and markets — and hype. Some of blockchain’s most zealous supporters and early investors argue it could bring significant change.

Now start-ups and established players are starting to test different uses for the technology. The Australian Securities Exchange (ASX) has made some of the boldest moves to experiment with blockchain yet. It announced this year that it would move Australia’s equities clearing and settlement system on to blockchain, working with Digital Asset Holdings, a start-up led by former JPMorgan executive Blythe Masters.

“Today blockchain is not a product or technology, it is more a journey or a process that companies are going through to understand what it can do for them,” says Matt Roszak, co-founder of Bloq, which helps companies build blockchain networks. “It is very similar to what we saw with the internet 20 years ago or with the cloud 10 years ago.”

Blockchain is an electronic ledger of transactions that is continuously maintained and verified in “blocks” of records. The ledger is shared between parties on computer servers and protected from being tampered with by cryptography. Some say it is a threat to banks and exchanges as it could disintermediate them by removing the need for a central reconciliation authority.

But others just see an opportunity for existing financial institutions to save billions of dollars by eliminating inefficiencies and the need for trade insurance. These cost savings would be most welcome to institutions that are struggling to boost their profits, partly due to the drag of heightened regulatory demands to increase capital since the financial crisis.

“Every 10 years or so there are tremendous changes in technology in markets,” Peter Randall, chief executive of Setl, a UK start-up, told a conference in Geneva last month. “It’s now time to do 21st century technology in the post-trade space. Distributed ledger technology is a proper and fitting technology to drop into that.”

The Depository Trust and Clearing Corporation, a US clearing and settlement services provider, has introduced blockchain for storing credit default swap trade information. Meanwhile, Euroclear, one of the world’s largest settlement houses, has joined start-up Paxos to develop a new settlement system for the London gold market.

“We will see a lot of different flavours to solve specific problems over the next 12-18 months,” says Mark Smith, chief executive of Symbiont, a blockchain start-up. “We will see some start to take hold and have actual liquidity.” He adds, though, that some of the bitcoin projects that showed early promise will end up being scrapped if the technology does not add enough value. 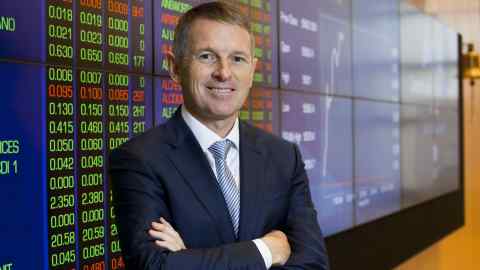 Last month, R3 — a financial technology company that is leading a consortium of more than 50 of the world’s biggest banks — along with Credit Suisse, Symbiont and others unveiled a project to determine how blockchain could improve the syndicated loan market, which enables group lending by banks to a single borrower.

“Whilst I think we have a long road to go before blockchain is everywhere, I do think you are going to start to see the beginnings of real-world application built on blockchain [starting] in the second or third quarter of 2017,” says Emmanuel Aidoo, head of the blockchain initiative at Credit Suisse.

One obstacle is convincing companies to adopt the technology. The industry would also have to create standards such as smart contracts — computer code that verifies and enforces terms of a contract — and a regulatory framework, while banks would have to integrate blockchain into their systems.

Ray Valdes, research vice-president at IT consultant Gartner, says that based on his analysis of the hype surrounding previous emerging technologies, blockchain is at — or just a bit before — the peak of inflated expectations among market players. He expects this will soon turn to disillusionment. “Starting early next year we will be reading articles in the mainstream press saying that this blockchain stuff isn’t very good at all,” he says.

“Then later, as people gain understanding, they will figure out how to make worthwhile use of this technology. That process could take years.”