New Delhi has unveiled revised figures showing that the Indian economy grew much faster than previously thought in the past two years, amid increasing controversy over the credibility of the government’s economic data.

The release of the Central Statistical Organisation numbers on Thursday came as Narendra Modi, prime minister, enters the final months of his term and the government faces highly competitive elections which must be completed by end of May.

The revisions were announced amid mounting suspicion among independent economists and political critics of the politicisation of India’s economic data. They say the figures have become increasingly opaque since Mr Modi came to power promising faster growth and millions of new jobs.

Mr Modi claims that India’s economy has grown faster during his tenure than at any time since it was liberalised in 1991. He has also dismissed the negative effects of the November 2016 cash ban, a radical experiment that shook India’s economy, battered the property market and sparked the closure of many small enterprises.

But independent economists say the government’s narrative of growth at an all-time high appears out of sync with other underlying data, such as private investment growth, credit growth and other independent indicators.

The system of collecting and verifying official statistics in independent India was globally admired. The Modi regime’s doctoring and lying have destroyed this credibility completely

“It’s a bit difficult to digest these numbers — they don’t even gel with the financial sector numbers we have,” Mr Sabnavis told an Indian television channel. “The credibility of our statistics seems to be under question.”

Eswar Prasad, an economist and Cornell University professor, said India’s data collection had always had some weaknesses but that the government’s non-transparent approach had been damaging.

“The apparent willingness to play up the good news and play down the bad news has ended up hurting the government and the Central Statistical Organisation’s credibility,” he said.

“The magnitude and somewhat ad hoc nature of the revisions — along with what seems like convenient timing — certainly raises a number of questions about the quality of the data and adds to the sense that data collection and reporting has become politicised.”

The revisions follow this week’s de facto collapse of the National Statistics Commission, an autonomous body set up in 2005 to raise the standards of data collection and analysis.

PC Mohanan, the commission’s acting chairman, and J V Meenakshi, its last independent member, both resigned this week, saying that mounting differences with the government led to their being “sidelined”.

The pair disagreed with the government’s assessment that growth during the previous Congress-led administration was lower than previously estimated. The commission had concluded the opposite. 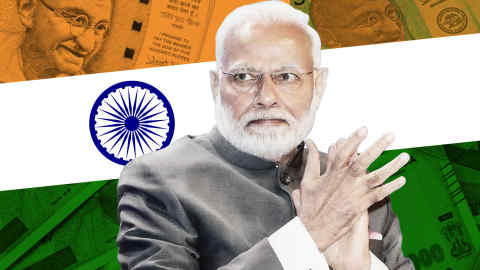 They were also concerned that the government had declined to release a long-awaited report by the National Sample Survey Organisation on employment and unemployment, which they had approved in December. The Business Standard, an Indian newspaper, claimed to have seen a leaked copy that showed the unemployment rate was the highest for 45 years, with joblessness particularly high among urban youth.

Their abrupt exit well before the expiry of their terms comes less than two months after the resignation of Urjit Patel, former governor of the Reserve Bank of India, over growing differences with the government on economic management.

“The system of collecting and verifying official statistics in independent India was globally admired for its scientific credibility,” he said. “The Modi regime’s doctoring and lying have destroyed this credibility completely.”