Geoff Dyer in Washington, Erika Solomon in Baghdad and Alex Barker in Brussels

Like all Vladimir Putin’s surprise announcements, his decision to withdraw the “main part” of Russian forces from Syria was intended for many audiences but above all for his ally, Bashar al-Assad.

With the precise nature of Russia’s military pullback in Syria still unclear, Mr Putin has managed to catch almost everyone off guard, including the US.

Yet if he really follows through with the announcement to pull out a large part of Russia’s military presence in Syria — which some western governments say is not certain — the most immediate impact will be to pressure the Assad regime to engage seriously in the latest round of UN-sponsored peace talks aimed at ending the civil war, which marked its fifth anniversary on Tuesday.

“The Russian political message on withdrawal was the biggest push they could have given the regime,” said a senior European diplomat. “This was an announcement directed at Assad that attempts to cast the Russians as constructive, and put the onus on the other side to make headway in the talks.” 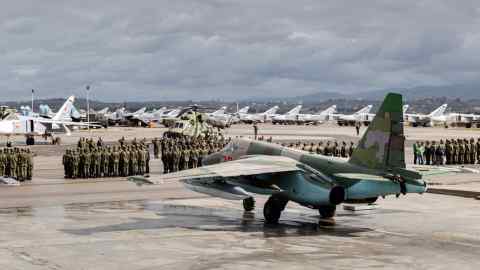 Staffan de Mistura, the UN special envoy for Syria, reconvened indirect talks between the Syrian government and opposition groups on Monday, just hours before Mr Putin made his announcement. Mr de Mistura said on Tuesday that a partial withdrawal of Russian troops would be a “significant development” and would have a positive impact on the talks.

A regional diplomat close to Moscow and Damascus said the Russian decision was, in part, borne out of frustration with the Syrian army’s performance. Many observers say government forces have been so hollowed out by the civil war that their recent victories have been largely dependent on foreign Shia militia and Russian air support.

There was also exasperation with Mr Assad and his inner circle, which the diplomat said some Moscow officials felt was acting overconfident and inflexible.

“It’s about teaching him [Mr Assad] a lesson, while showing to the world that they are serious about confidence building measures,” he said.

But because Russia has not promised an entire withdrawal, it is likely to maintain the aircraft and weaponry it needs to protect the survival of the regime, diplomats said. The Russian move could also encourage the Assad regime to lean more heavily on Iran for military support.

In the US, the announcement cut to the heart of the debate that has surrounded Russia’s intervention in Syria at the end of last summer — between those who saw it as the move of a savvy tactician and those who viewed it as a strategic blunder.

The White House has consistently argued that Mr Putin was at risk of finding himself in a Syrian quagmire. In an illuminating series of interviews with The Atlantic published last week, US President Barack Obama said Russia was “overextended”.

“They’re bleeding,” Mr Obama said. “And their economy has contracted for three years in a row, drastically.”

Derek Chollet, a former senior White House and Pentagon official in the Obama administration, said it was too early to judge how much of its forces Russia would actually withdraw from Syria. But he said the announcement was likely a recognition that Russia had taken on too much.

“The Russian intervention in Syria has never been a winning proposition, so this seems to me to be an attempt by Putin to grasp victory from the jaws of defeat,” he said.

However, the Obama administration’s domestic critics said Mr Putin was announcing the pullback because he had already achieved most of the goals it had set for its Syria intervention.

John McCain, the Republican chairman of the Senate Armed Services Committee, said the Russian leader could afford to withdraw some forces because the Assad regime had already been saved. Mr Putin was signalling that “he has bombed and killed enough of the opponents of the murderous Assad regime to ensure its survival”, Mr McCain said.

News, comment and analysis about the conflict that has killed thousands and displaced millions

Some Russia experts agree that Moscow probably believes it has secured many of its tactical objectives.

Andrew Weiss at the Carnegie Endowment in Washington believes Moscow’s intervention has given a “new lease of life” to the Assad regime, offering it a much better chance to dictate terms at future peace talks. He said Russia had weakened the opposition, while seemingly avoiding being entangled in a dilemma, and had forced the US to deal with it on equal terms in Syria diplomacy.

“It is still early and hard to gauge what the actual drawdown will look like,” Mr Weiss said. “But if those were the objectives, then the Russians can come out and say they were reached.”

Russia had also left itself the platform to return troops to Syria at short notice if needed.

Bob Corker, Republican chair of the Senate Foreign Relations Committee, said Russia might use its partial pullback in Syria to lobby for relaxation of Ukraine-related sanctions. “Over time, they are trying to break European resolve as relates to sanctions,” he said.