The US central bank announced it would begin winding down its monthly bond-buying programme this month.

The announcement had been widely expected, and stock markets reacted positively despite earlier concerns that the pull back in crisis-era stimulus could derail the recent equities rally.

The S&P 500, which had slipped slightly earlier in the day, swung to a gain after the Fed’s announcement and climbed higher as Jay Powell spoke to reporters.

The Fed chair said the central bank could adjust the pace of its tapering but stressed that “we wouldn’t want to surprise markets” and would provide ample warning ahead of any change. He added that the Fed would not rush to raise interest rates.

The benchmark S&P 500, tech-heavy Nasdaq Composite and Russell 2000 index of smaller companies all closed at record highs, up 0.6 per cent, 1 per cent and 1.9 per cent respectively.

In Asia, markets followed Wall Street higher, with Japan’s Topix index rising 0.9 per cent and Australia’s S&P/ASX up 0.4 per cent.

The increases followed a positive day for European markets. The continent-wide Stoxx 600 index added 0.4 per cent, closing at a record high for the third successive day.

Headline inflation in the US has been running at more than 5 per cent for several months, and the Fed on Wednesday tweaked its language to suggest that higher prices could persist longer than previously expected.

The central bank had already telegraphed these intentions at its September meeting, where half its policymakers also forecast the first post-pandemic rate rise next year. 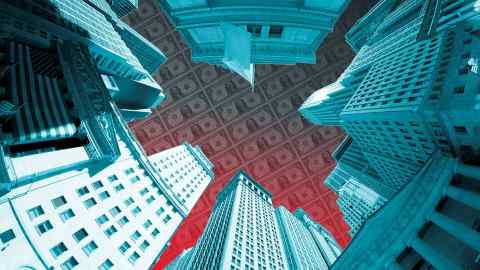 Government bond markets have whipsawed in the past two weeks as traders speculated about how quickly the central bank would taper its monthly purchases of $120bn of Treasury notes and mortgage-backed securities and whether this would be a precursor to interest rate rises in 2022.

The yield on the two-year US Treasury note, which moves inversely to the price of the debt and tracks interest rate expectations, hit an 18-month high of 0.55 per cent last week. The current fed funds rate is slightly higher than zero.

“Investors are using the bond markets to play out their central bank forecasts,” said Rebecca Chesworth, senior strategist at State Street’s SPDR exchange traded fund unit. “But equity markets have got that calming factor of good earnings coming through.”

Companies listed on the MSCI World index of leading shares have beaten analysts’ forecasts by 10 per cent on average during this third-quarter earnings season, according to Bloomberg data.

“Earnings season has been great, but it is backward-looking,” said Beata Manthey, equity strategist at Citi. “The combination of prospective interest rate rises and high valuations is making us nervous,” she added, particularly because a slowdown in China’s economy “does not feel evident in stock markets yet”.

The yield on the US’s benchmark 10-year Treasury note climbed 0.05 percentage points to 1.60 per cent. This important debt yield, which underpins government, business and household borrowing costs worldwide, has climbed from about 0.9 per cent at the start of the year. Higher yields reflect lower prices.

The Bank of England will follow the Fed with its latest monetary policy decision on Thursday, after governor Andrew Bailey said last month that policymakers would “have to act” against surging energy prices and above-target inflation.

The UK’s 10-year gilt yield, which acts as a benchmark for borrowing costs in Britain, has climbed from about 0.7 per cent to 1.07 per cent in the past two months, including a 0.04 percentage point increase on Wednesday.